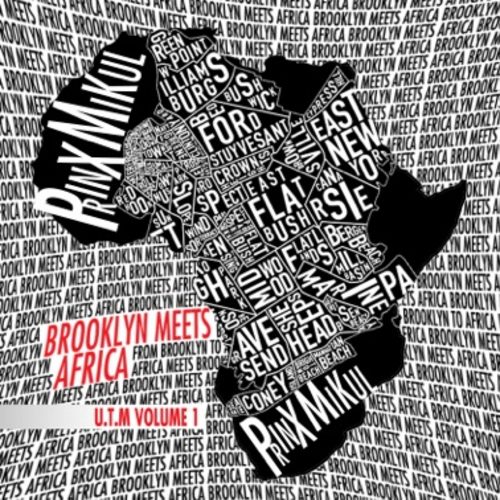 “Brooklyn Meets Africa” is a self-explanatory title for Prinx Mikul (pronounced Prince Michael). He linked up with two African producers named Envy ‘The Loopdigger’ and Vez ‘The Scenestar’, and from there purposefully chose artwork, guest artists and references to reflect his project’s concept. As an older head in hip-hop it reminds me of the Afrocentric movement of the late 1980’s and early 1990’s, when rappers wore dashikis and African medallions, with songs about the universal experience of racism in the face of a European white male hegemony. When KRS-One and similarly minded artists said this was the history that wasn’t found in your classroom textbook or local library (or “lie-bury, where the lies are buried”) it rang true for me. As much as I admired the movement I never adopted the attire since I knew how much of a poser I’d look like, and the popularity of conscious rap quickly faded as the rougher rappers of the 1990’s got radio edited just enough for the mainstream to latch on.

Some elements of the movement have persisted though, and the Prinx Mikul album attempts to forge a more direct link than those who wore the clothing but knew nothing of the African continent (something King Sun famously made fun of on “Be Black”). I may have had some mistaken impressions about how edutational the album would be though. Mikul does at times acknowledge the African influence on songs like the title track, and not in a lip service way, but not in a way that offers new insights or provides lessons for the listeners. There’s no sense of political struggle either in Brooklyn or Africa – just Mikul’s own personal struggle to be a success.

“In touch with my roots, Louboutin boots
Got the bottoms even redder from stompin out these flukes
Deadly like a nuke; please don’t test me
But keep actin and get +Sniped+ like +Wesley+
Paid the price – shout out my dude Prezzy
And a priceless entourage, rep the God heavy
Flatbush like a dollar van headed to KP
Yeah I freestyle, still gotta pay me
cause my kids gotta eat, Brooklyn where I’m from
But love to South Africa like Mandela son”

Envy’s sprinkling of pianos and drums is effective on the song, so it’s enjoyable even if it’s not that profound, and sometimes silly when it tries to be: “Rest in peace J Dilla/that blueprint you left, we gon’ follow like Twitter.” The bulk of the production is E’s and you can see why Mikul sought him out. “Things You Do” featuring Jade Rene may be a quiet storm cliche, but Mikul channels his inner J. Cole to make it work. “Would’a Been Gone” featuring BB Sling channels Wiz Khalifa instead, as the tandem are in search of “killer kush” and “munchies” to ease their troubled minds. The most Afrocentric song may be “Ya Beautiful,” which celebrates the beauty of the Nubian goddess.

As for Vez The Scenestar, he does occasionally shine through as a producer on tracks like the shuffling charm of “I’m a Winner,” even as Mikul distracts me from it with unintentionally corny lines like “shitting on these niggaz like toilets” or “+Can’t Touch This+, yeah I’m on my MC Hammer.” That’s the ultimate frustration of “Brooklyn Meets Africa” for me as a listener/reviewer. Mikul’s got a pleasant enough raspy New York flow, and on occasion he reminds me of Nas, but then he says something that makes me wince or shake my head. I also feel like the album was an opportunity missed to say something deep, deep, deeper than Atlantis yet it only left me wanting to dig out my X-Clan albums. I see the promise though. Mikul should continue down this road, particularly collaborating with Envy, and whether his topics are profound or personal he needs to develop his lyrics to reach another level. This is only the beginning.