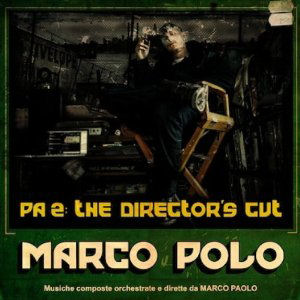 Perhaps I’ve heard too much hip hop over the last few years, but the ratio of producer albums seems to be higher than usual. I’m not talking your showcase records from Oh No, Oddisee and the like that demonstrate instrumental hip hop is still alive and well, but the glorified compilations from beat makers whoring their phone’s contact list. Of course, hip hop has had compilations from some of the finest producers â€“ Da Beatminerz, Pete Rock and DJ Premier all dropped respectable, and sometimes exceptional records, yet never with the regularity that their younger counterparts seem to be doing these days. Statik Selektah dropped ANOTHER album, Tony Touch made a comeback with “The Piece Maker 3” and DJ Khaled released his sixteenth record with the same frickin’ line up. Thankfully, Marco Polo is on his second compilation in six years having crafted two strong albums in “Double Barrel” and “The Exxxecution” in between with Torae and Ruste Juxx, respectively. Reflecting back on 2007’s “Port Authority” proves that Marco possesses the timeless sound that many of his peers of the 90s had, and with stellar songs like Masta Ace’s “Nostalgia” and O.C.’s “Marquee” ensuring that record isn’t forgotten, it’s finally time for Marco to try and one-up his durable debut.

For the most part, Marco delivers exactly what his fans crave; hard yet crisp, old yet modern, underground yet remarkably accessible; traditional hip hop. “Port Authority 2” (let’s call it “PA2”) kicks off with a real statement, a reunion song for Organized Konfusion (Prince Po & Pharaohe Fucking Monch). Compared to their work in the early 90s, “3 O’Clock” is surprisingly perky, but remains a great introduction to an album with east coast boom bap coming out of its ears. What I love about Marco’s tracks is that he rarely delivers half-baked product, no better example being in the DJs he enlists (usually DJ Revolution). “PA2″is blessed with turntable trickery that breathes life in to the stale sub-genre that DJ Premier (whether intended or not) has spawned â€“ the generic street rap with obligatory scratched hook. It’s a well-worn formula, that Marco often applies himself on songs like “Savages” and the superb, stab-fest that is “Astonishing”. The latter boasts a dream lineup of emcees the wrong side of 40: Large Professor, Tragedy Khadafi, O.C. and Inspectah Deck. Given all of them are experiencing renaissance periods in their career it shouldn’t really be a surprise that it is a standout moment.

If you haven’t heard Marco Polo productions before, just know that he is always capable of delivering beats to make you elbow drop a child. Rah Digga destroys “Earrings Off” as if she recorded on her period, and demonstrates some of her renowned rowdiness first seen on songs like “Break Fool”. The bass though, is utter filth. In fact, much of “PA2” has a dirtier feel to it than “PA1” and even the preview to this (“Newport Authority 2”) he released earlier in the year. As you would expect, New York is well represented throughout but Marco isn’t afraid to expand his horizons by bringing in Cali veterans King Tee and MC Eiht on “West Coast Love”. It doesn’t quite match up to some of the other songs purely because it lacks the bite that much of “PA2” packs, but after Last Emperor’s strange song about being a cyborg (“6 Trill”) it is a reminder that Marco isn’t just another sub-standard, boom bap producer. There’s even a track with crooning on (“Wrong Girl”) that proves to any underground producer out there that hard hip hop doesn’t HAVE to have a scratch hook.

The album is tied together by the narrative “talents” of actor Michael Rapaport, which could have been done without as other than the “Director’s Cut” name on the album cover, there’s no underlying plot or cinematic experience to tie all the songs together. It’s a compilation of primarily dope tracks that are more polished than your average rap producer releases, and for fans of hardcore hip hop, the second half of “PA2” is a treat. Despite not being known for their lyricism, Oh No & Alchemist (known collectively as Gangrene) bless the chaotic “Strange Brew”, but “What They Say” is where the real carnage occurs. Lil Fame’s gun impersonations aid Kardinall Offishal and a vicious Styles P, but Fame himself proves he is the king of ignorance with lines like “I done been through a lot of shit, lived through a lot of shit, you was an infant sucking on your momma’s tit” and the hilariously simple “it’s the M dot O dot P dotâ€¦ motherfucker!”. As great as it is to hear Fame deliver, I still yearn for a Marco production with Billy Danze on there too. I can’t be the only one craving a Marco and M.O.P. album!

“Port Authority 2” comes to a close with some mildly disappointing collaborations â€“ Supastition and Shylow passionately deliver their case for why they are happily not superstars, but are let down by a plodding production while Blaq Poet, Panchi (of The NYGz) and Hannibal Stax combine to provide a worthwhile head-nodder (on “Sucka Free”) but don’t quite reach the level of fellow NYC spitters featured earlier in the album. It screams sturdy, and is more along the lines of the material on “Newport Authority 2”. Thankfully these moments are balanced out by dirt peddlers The Doppelgangaz’ appearance on “R U Gonna Eat That” and Talib Kweli’s “G.U.R.U.” ; a genuine, honest reminder that Guru was not only a great rapper, but a great person. Talib’s remarks about how he gets mistaken for DJ Premier, stories of Guru challenging random guys to a battle and a beat from Marco that Preem would be proud of, all contribute to the best song on the album. Granted, being a huge Gang Starr fan will sway my thoughts on this track but it is one of the better tribute songs you’ll hear on any deceased emcee.

Six years is a long time in any profession and Marco Polo has undoubtedly improved his game, throwing in thicker basslines, harder snares and more focussed songs. Despite upping the guestlist from 24 to 38(!), “Port Authority 2” actually feels like a collection of tracks rather than a bunch of verses set to a beat (which Statik Selektah’s records often lean towards). “Port Authority 2” is proof, if ever it was needed, that taking time with projects tends to equal a superior product. Whoever nails Marco down for a solo project will be truly blessed, and safe in the knowledge that he is the cream of the crop when it comes to this east coast boom bap in 2013.