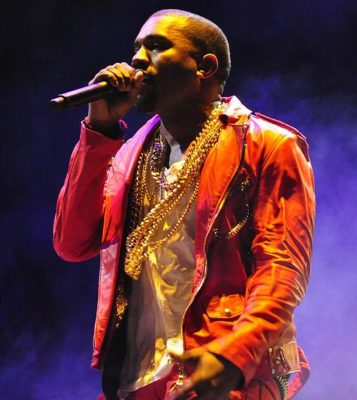 Kanye West – Year of the Villain

n one of my favorite books of 2013, “I Wear the Black Hat,” Chuck Klosterman defined a villain as “someone who knows the most, but cares the least.” Throughout his ten-year career, Kanye West has teeter-tottered back and forth between an underdog, hip hop hero and a villain.

During his College Dropout/Late Registration days, a young West cared the most. He re-recorded most of the songs that ended up on his debut LP, he was visibly hurt when he received 4 star reviews and he tried his damnedest to outrap his “big brother” on the “Diamonds (Remix).”

Then he cared the least during his post-Katrina rant against President George W. Bush. And after his mother passed unexpectedly, he once again cared the least, releasing 808s & Heartbreaks – an album that features overly autotuned, off-pitch singing, instead of rapping. West’s villainy may have peaked when he crashed Taylor Swift’s VMA acceptance speech. West knew the most (Beyonce’s “Single Ladies” is one of the best pop songs released in the past ten years and has already become a modern day staple at weddings, whereas I forget which tawdry Swift song actually received that award), and cared the least (a Hennessey-inspired rant ending with a “sorry, but not really” shrug).

The couple of years following the Swift incident, Kanye worked ardently to try and clean up his public image and re-gain the adoration of hip hop fans who turned on him after 808s. West collaborated with hip hop legends such as Pete Rock, RZA and DJ Premier to earn back points from hip hop purists, and crafted brilliant pop songs like “All of the Lights,” “N***** in Paris” and “Mercy.” (The even more brilliant “Runaway” treads more in the villain role though, but that’s the exception that proves the rule.) My Beautiful Twisted Fantasy was wholly realized and executed hip hop perfection. It pushed boundaries while not being overly offensive (again, the 9-minute “Runaway” is the exception here). It was orchestrated to be the perfect, 5-star album that it was eventually received as. He cared the most.

Something must have happened in late 2012/early 2013 that pushed Kanye back into the life of a villain. Could it have been the lukewarm reception of his entirely half-baked Cruel Summer compilation album? Could it be the constant attention he and his girlfriend Kim Kardashian received from gossip mags? Could it be that Kanye has accomplished so much as a musician, but so little in his other passion – fashion? Whatever it may be, Kanye evolved from part-time underdog/part-time villain to a full-fledged pop culture super villain. And he’s never been more awesome.

On the first, and probably the most abrasive and off-putting, song of Kanye’s most abrasive and off-putting album, he rhetorically asks, “How much do I not give a fuck?” From the first few seconds of the song/album, it’s abundantly clear he does not give a single fuck. Yeezus, as brilliant as it may or may not be, is aimless, sloppy, confusing and its only goal is evoke strong feelings from whoever is listening to it. Yeezus was rushed. As Rick Rubin alluded to in interviews, Kanye didn’t have the lyrics written to several songs on the day before the album needed to be finished, and when listening to the final product, that’s in no way surprising.

The lack of album art may have been guised as “artsy” and “minimalistic,” but that’s total bullshit. Yeezus doesn’t have album art because Kanye didn’t give a fuck about album art for this record. Kanye has always had great album art (Watch the Throne and Cruel Summer being exceptions), and has even pushed back release dates in order to allow the artists to finish their work. But not this time. The title Yeezus, itself is another example of West caring the least. Whereas his first three albums followed a theme and 808s and Dark Fantasy’s titles accurately described the music on the discs, Yeezus is just a bad pun.

Yes, there are loose religious themes, and Kanye alludes to himself as a god, but the title doesn’t come across as something that took more than two minutes to come up with. But Yeezus is just scratching the surface of Kanye’s villainy. On the year where he become a father for the first time and got engaged to Kim Kardashian, one would expect him to show a lighter, and perhaps a more mature side of Kanye. But instead, we got the exact opposite. West has never seemed more troubled and dark. He’s sick of being marginalized by classist fashion designers, he’s mad as hell at Nike for not giving him royalties for his Red October sneakers, he’s fighting paparazzi trying to sneak photographs of his family.

West finally decided to start doing interviews again, but his answers came off more as impassioned, angry rants that rarely had anything to do with what the interviewers were asking. Some of West’s best, and most villainous, moments of the year came during his outbursts at Sway (“YOU AIN’T GOT THE ANSWERS!” “I gave Sway his first TV”), an altercation with Jimmy Kimmel (#NODISRESPECTTOBENAFFLECK) and aligning himself among historic and prominent figures such as Pablo Picasso, Walt Disney, Steve Jobs, among others.

In 2013, Kanye West was the troll of trolls. All this madness has to be some kind of joke, right? He’s the equivalent of someone making a post titled “Bruno Mars >>>>> Prince” on a music message board, and not replying to the angry commenters. The biggest troll Kanye pulled off this year was “Bound 2.” After nine tracks of brutal, jarring synth noises, he finally did what everyone wants Kanye to do – make a song with a soul sample. But production-wise, “Bound 2” is a far cry from “Otis” or “The Glory.” It’s an incredibly crude chop that sounds as if it was the first time Kanye touched an MPC, but most Yeezus detractors still claim it as the lone song on the album they like.

Content-wise, “Bound 2” is the only time Kanye sheds his godliness and admits his own humanness. He’s vaguely vulnerable with lyrics alluding to a relationship lasting until Thanksgiving and admitting there’s a possibility it will see Christmas morning. But there are also references of him wanting to fuck this girl on a sink, and asking his “bitch for other bitches.” So yes, after an album of him claiming he’s a god, he finally admits he’s a man. But not necessarily a good man.

If that wasn’t enough to troll the sect of Kanye fans who “only like his first three albums, before he was an asshole,” the puzzlingly lo-fi video of “Bound 2” alienated the last lot of them. Kanye has a history of creating beautiful visuals to support his music, dating back to “All Falls Down.” And with videos like “Touch The Sky,” it’s obvious that Kanye has no issue throwing money into his projects. So why is the video for the only song people like on his album filmed using a very crudely executed green screen? Is it Kanye winking at us, saying this has all been a joke? Was it maybe Kim’s idea to film her riding on a motorcycle with Kanye, but he doesn’t know how to operate one, so they pretended to ride it? Has Kanye run out of money due to Yeezus underperforming on the charts, so he’s had to sacrifice big budget videos? All of these are possible, but I think the real reason is he just simply does not give a fuck.