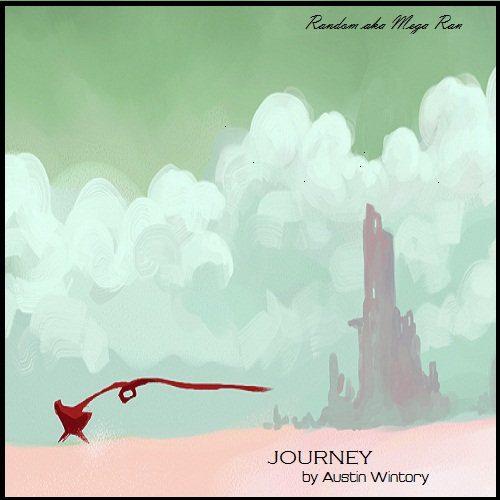 The video game “Journey” was designed to have a profound effect on the people who played it, and rap artist Random a/k/a Mega Ran seems to be one of them. It’s probably not a surprise to know that Ran connected with the game on multiple levels, given he’s a gamer since the old school days, and understands in a way people who dismiss them as “just kid stuff” never will. A good video game is just like a good movie – it pulls you into a story and makes you connect to it emotionally. You relate to the protagonist’s struggles and goals, and you get swept along a roller coaster of highs and lows as you try to help them achieve those goals. If the background music is lushly orchestrated, if the characters are well drawn and animated/rendered, if the supporting cast and dialogue are compelling, it’s a transcendent experience. Good games are like good movies – they stick with you over time. They become more than just a passing fancy.

Of course there are “popcorn” video games just like there are harmless slapstick comedy films, but “Journey” won praise from critics for taking the cinematic presentation of gaming to a whole new level. You’re dropped into a world with little to no explanation of what’s going on – you’re in a desert and there’s a mountain in the distance. You have to reach that mountain. Along the way you meet other travelers who can help you in your quest to reach the mountain and vice versa. You’re actually playing the game at the same times as other people, and so you become a part of their ‘journey’ at the same time as they become part of yours. It’s a hard thing at the end of the day to take lightly. Even though you don’t communicate either through text or a headset in the traditional sense, the other players you interact with change your journey – to the point they become part of the credits at the end when you finish the quest.

While “Journey” is not a long game in the traditional sense of a goal oriented journey like a RPG, the fact it’s still being played and discussed two years after it was released shows the impact the game made. As noted Mega Ran is clearly a fan of the game, as he’s made his own interpretation of “Journey” in hip-hop form through this four track EP. In keeping with the spirit of the game this is an instrumental only release, with no words of rapping or even explanation from Random at any point during the listen. Instead he’s added his own hip-hop beats and breaks to the music of the game, and thus made the story of “Journey” his own. To me this is most successful on the longest track “Apotheosis,” which is well suited to a rap remix, taking on a very anime/Japanese sensibility in doing so.

This is an album you can download for free if you so choose, or you can “name your own price” for the privilege of a copy, but it should be listened to either way. Even if you’ve never played the game, you will be compelled to by the orchestration of the instrumentals, which have taken us a long way from the days when 8-bit chiptunes were the highest form of instrumental expression possible in a game. I don’t begrudge those songs, in fact I am quite fond of the Mario/Zelda/Mega Man/etc. songs of my youth. In looking back at those days though I can still marvel at how far the video game genre has come, not just in terms of the technology evolution, but in the creative revolution of the people who have something artistic to say. Filmmakers may want to entertain you at the cinema, but that doesn’t mean that the actors/writers/directors/musicians don’t also want to convey to you their artistic view. Sometimes that viewpoint gets lost or destroyed by the capitalistic machinery of making a buck – and sometimes a film can succeed in being a true work of art. “Journey” is just such a game and Ran’s interpretation is the same.