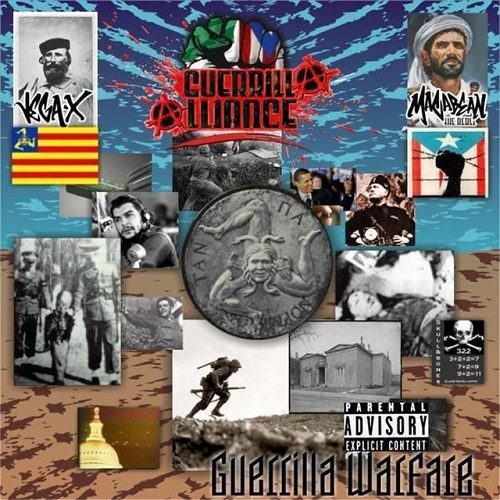 Guerrilla Alliance consists of Macabean the Rebel and Vega X, who (according to their bio) have been working in collaboration since 2003. We at RapReviews have only recently been exposed to Planet X label, and while Vega X’s style gives me cause for pause, they’ve produced and released some interesting tracks. I also take note of anybody who goes to the trouble to professionally print and package a compact disc complete in the shrinkwrap, because in the 2010’s more and more artists choose to release entire albums digitally. I can’t fault them given it’s both a cost-saving measure and convenient to the end-consumer, but that just shows more commitment on the part of artists like Guerrilla Alliance, who fully intend to sell you hard copies at live shows or through retail outlets. That’s a mark of confidence in the value of your creation.

Having offered my opening praise to the hard working people of Planet X Records, I must now make a few notes about the “Guerrilla Warfare” album that are more measured. I’m a little dismayed that it only takes a few tracks of the album before I’m hit with some very overused movie samples: “Shogun Assassin” in the intro (which to my mind forever belongs to GZA), the “you’ve got to get mad” speech from “Network” in “Wrath of Kings” PLUS Johnny Depp’s “too weird to live, and too rare to die” speech from “Fear and Loathing in Las Vegas.” Songs are also peppered with anti-New World Order propaganda, such as quotations read from William Cooper’s “Behold a Pale Horse,” which although somewhat cliche in hip-hop over the last 20 years are preferable to the movie dialogue retreads. There’s a very Stoupe/Jedi Minds type sound to tracks like “Architecture of a Perfect Weapon,” which makes for a mostly enjoyable experience.

I qualify that with “mostly” because my issues with Vega X remain largely in tact from my last exposure to him. Macabean the Rebel proves a good balance to him, as he certainly understand the mechanics of flow, but Mr. X often feels as though he’s flying off the handle and screaming his rage into the nearest microphone available regardless of whether he stays on tempo. His conviction makes him stand out amongst more monotone peers, but so does his excessively vitriolic attacks: “My axe is blood soaked/after I leave friends for decapitated/Guerrilla Alliance killing faggot racists.” I’m not any more convinced he’s a homophobe than Tyler, the Creator but the fact he feels the need to throw the “faggot” slur around so frequently makes me wonder whether it’s the New World Order or The Castro that he feels are the real enemy.

“Guerrilla Warfare” is both impressive and dismaying in its length, as I enjoy the production on most of the album, but would enjoy the album even more if it was a Macabean the Rebel solo project. This is not a knock on angry rapping, because when done right, vitriolic and loud raps from M.O.P. are among the most enjoyable things in hip-hop. There’s also a quieter but equally valuable “righteous anger” found in the songs of artists like Dead Prez and The Coup. Walking the line somewhere in the middle is Immortal Technique, who isn’t afraid to get loud to emphasize a point but is just as capable of discussing the New World Order in a calm and surgical manner, making it clear he’s an intellectual foe to those who would try to summarily dismiss him. I’d like to suspect Vega X has hidden depths too, but he never stops screaming long enough for me to find out.

“My comrade Macabean will lace your grill with his firestarter!!
Stick to club tracks if your flow’s simpler!!
This is Guerrilla army revolution taking no prisoners!!!
Y’all are fucking hater clowns!
PXR plays your face with tracer rounds!
My flow’s flawless! Run through your whole roster no contest!
My voice makes tracks melt! And I blow trees from 4th degree black belts!!”

If you can get accustomed to Vega X yelling his ire at you constantly, there’s merit in tracks like “Audubon Ballroom” (where he tones it down a bit) and “The Prophecy,” and moments of clarity like the line “independent label shit’s as fake as the majors.” He’s right about that – just because you’re an independent doesn’t mean you make awesome artistic albums that shake the underground and redefine the meaning of hip-hop. I think X is a “take it or leave it” artist because I’ve heard him yell “MOTHERFUCKER” and “FAGGOTS” into enough mics over three albums to know that’s just his style. Macabean supports him to a degree, the production supports them both even more than that, so I can’t say “Guerrilla Warfare” is unredeemed. I CAN say I’d enjoy an instrumental version or an alternate cut with Macabean’s verses only more. I’m glad Planet X takes hip-hop seriously, but if Vega is the focal point of their releases, it’s going to seriously inhibit the size of the audience they can reach.