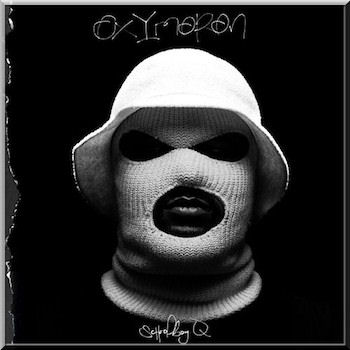 Quincy Matthew Hanley’s major label album “Oxymoron” has been cooking for a couple of years now, leaving little intoxicating scents like “Collard Greens” in air, just enough to taste but not enough to eat. In various interviews Q has hinted that Kendrick Lamar’s “good kid, m.A.A.d city” inspired him to equal or exceed the success of his fellow Black Hippy artist. If you haven’t been savoring the flavors all this time while waiting, go ahead and get your taste of the Nez & Rio produced “Man of the Year” – it’s heady and hypnotic:

“B-bounce for the crown, you be hatin and I still hold it down
When you round man the girls never lounge
Man I heard you a hound; bruh man, that bitch need a pound
Tip, tip, tip bounce out her gown
Hands high to the sound, uh yeah I’m the rich nigga now
Bi-bitch, I’m the talk of the town
Make a bitch run her mouth – go south for the border
Pop, pop, pop, down to the floor – bounce”

It’s not hard to draw a comparison between ScHoolboy Q and Tyler, the Creator if you try, and I’m more than willing to make the effort. First on the list is their absolutely unapologetic use of profanity and blunt use of sexual references, albeit with far less homophobic slurs than his Odd Future counterpart. Second is the deeper raspier voice of Q when compared to the rest of his crew, a distinction that only stands out more when he pairs with Lamar on the aforementioned “Collard Greens.”

Finally and perhaps most importantly there’s Q’s absolute unwillingness to sugarcoat the rough and rugged nature of his Los Angeles upbringing, as evidenced by the Sounwave produced song “Hoover Street,” where he freely admits “Since a young nigga, I admired the crack sellers.” It’s a coming of age narrative, with the kind of childhood nobody would want to come of age in, yet it molded the artistic urges that drive Q today.

“We wasn’t thinkin of gettin money then
Nor did I wonder why my Uncle done sold his Benz
Cause he been trippin now, he sweats a lot and slimmin down
I also notice moms be lockin doors when he around
But anyways, his wife done left him and now he livin with us
My bike is missin, grandma like to hide her check every month
My Uncle’s nuts, he used to give me whiskey to piss in cups
Knockin on the door tellin me to hurry up, he in a rush
I gave it to him then got my ass whipped for doin it
Moms used to tell me like ‘Nigga, know who you dealin with’
Them was the good days…”

If those were the GOOD days you don’t have to think hard to figure out what the BADdays were like. Q’s honesty informs the entire album, and his gruff charisma and truthful insights about his less than perfect life keep him firmly in the spotlight. Even when big names from rap show up, ScHoolboy Q firmly holds down that #1 spot. Raekwon can’t shove him aside on “Blind Threats.” Kurupt and the aforementioned Tyler still have to play second fiddle on “The Purge.” Even the crossover success of 2 Chainz can’t hold a candle to ScHoolboy Q on the Mike Will produced “What They Want.”

“Might pull up in my bucket
This nine holds a good dozen
Might slide up in yo’ cousin
Just made a mill’ and still thuggin
Niggaz banged on me, but they shoulda shot me
See I hit the corner then spot him, got him
Court dates but I skipped the bail
Rather wig myself before I sit in jail
Need a gang of weed, and a pint of lean
Got a hat say Figg on my gangsta tip
Don’t trust no ho, I might sock the bitch
I’m apocalypse to yo’ politics”

I purposefully ended the quotation on that line because it sums up Quincy’s style and personality perfectly to me: “I’m apocalypse to yo’ politics.” He’s going to crash through you and end your world, not because he holds any personal animosity to you, but because he’s simply a force of nature to be reckoned with. He has one other similarity to Tyler though – a depth of intelligence bubbling just underneath the surface of his emotional turmoil. On the Nez & Rio produced “Gangsta” we hear briefly from his daughter, and later on he recognizes the dead end that lifestyle will bring, noting “I might relocate” and “come around my town you clown, that’s suicide.” This is gangster rap, but it doesn’t glorify what it means to be a G, it just tells it like it is. Did he achieve his personal goal of surpassing Kendrick though? The production is too inconsistent to get him there, but it’s certainly not due to a lack of intrinsic talent on his part. Keep your eyes on Q.