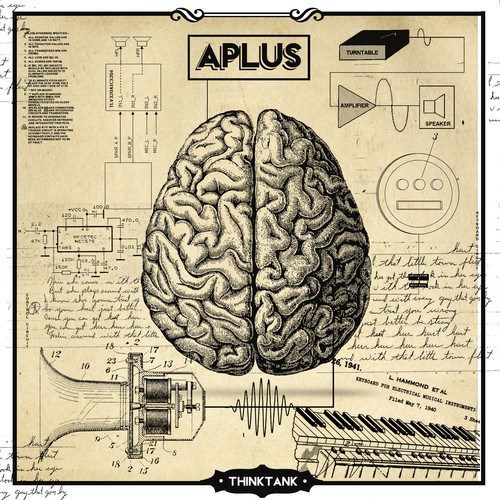 In a previous A-Plus review the Hiero hip-hopper was referred to as “one of those underrated, pseudo-unknown producers that’s been a big part of the West Coast scene for a long time.” Well said – in fact so well said that I consider it the perfect explanation for reviewing this all-instrumental A-Plus album. In a deed of total generosity A-Plus gave away this download for free, letting listeners delve into his beat tape and judge the results for themselves. The interludes between songs are narrated by a voice that’s eerily reminiscent of Madlib’s alter ego Quasimoto.

“Happy New Year” is an appropriate place to start, as it’s hard drumming, guitar rocking slab of funk, punctuated by funky keyboards and a rollicking bass. It’s not difficult to imagine any of the Hieroglyphics rapping over it, but it works perfectly well as a solo instrumental. The same can be said of virtually any song on “Think Tank.” It’s easy to lose yourself in the echoing and airy sound of “I Don’t Forget,” or for Pam Grier to strut across your mind as “You Owe It to Yourself” plays out like a modern day revenge anthem. “Overcoming Jealousy Theme” takes that one step further – this song is jazzy, gritty, dirty throwback nostalgia.

Even though A-Plus isn’t rapping on “Think Tank” and we won’t score it for lyrics as such, it would be incorrect to say this album is completely sans vocals. In fact the sped up vocals of “It Will Pay Off” will remind a listener of Kanye West at his production best (or at least before his ego got out of control). The piano and warbling bass of “You Ain’t Crazy” are a good cap off for “Think Tank,” although this is one of those albums that you can rearrange in any order you choose and enjoy just as much from start to finish. I won’t be the least bit surprised if mixtape rappers are rapping over “Nothing At All” and “Hear Me Out” before the end of the year – with or without crediting A.