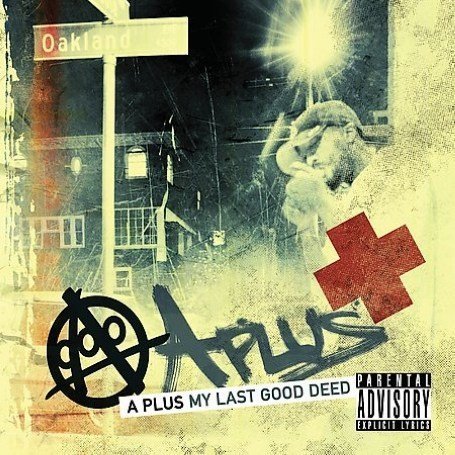 The Hieroglyphics crew is one of the most prolific underground crews in the country; comparisons to a West-Coast version the Wu-Tang Clan abound. And for good reason. “Third Eye Vision” (1998) and “Full Circle” (2003) featured upwards of seven different members whose solo careers were solidified by these group releases. Even prior, and more importantly, Souls of Mischief’s “’93 Til Infinity” (1993) found future members A-Plus, Opio, Phesto D, and Tajai of Mischief offering Californian alternatives at a time when the rest of the country recognized the state for more gangster contributions a la NWA, Dr. Dre, and Snoop Doggy Dogg.

A-Plus’ production and his rapping put Souls of Mischief and later Hiero on the map in the underground world. He’s another one of those underrated, pseudo-unknown producers that’s been a big part of the West Coast scene for a long time. His solo release, therefore, is incredibly overdue.

Right from “Intro: Lyrically Beautiful,” A-Plus makes it clear that he’s been through a lot and seen widespread underground success, embodied in “World tours, females du jour, and sticky bomb.” Saying it “truly ain’t all good,” he inspires the listener to wonder why he continues to produce, a rhetorical question later answered by the rapper himself: “For all the haters require presentations.” A-Plus is here to show that the last fifteen years and his current position are well-deserved and that he’s still an important figure in West Coast hip hop.

He immediately begins with the exceedingly catchy “The One.” Take the beat from Zion I & The Grouch’s “Hit Em,” replace the heavy synth with a sexy, mysterious guitar loop, and add a healthy dose of reggae influence. The track functions as A-Plus’ mission statement and plainly states his confident, secure nature:

“I can pack a house in any city on the earth
It don’t matter if you feel me or hear me on your way to work
[…]
This my first solo effort I hope you get it
If you don’t then it’s copasetic, but no disrespectin
I done earned my stripes, dude made, my dues paid
While them other fools sweet as a pool of Kool-Aid”

Not to appear as an artist disconnected from the listener, A-Plus follows with some calm, subtle, and beautiful production; a brilliant Hiero collaboration with Casual; and some positive lyrics on “A Beautiful Thing.” He tells the listener to be happy with whatever their situation is, saying

By the time the listener’s gotten to “What’s Hannin,” the braggadocio and pseudo-mainstream drumbeats tire in the face of no real stand-out tracks. Which is probably why “Nothin Fake/The Ultimate” is such a gem. Del drops into to remind the listener that A-Plus can provide the same light lyrics and production that made the earlier Hiero albums so good:

“I know you and you know me
Somebody told me that we Ol G’s
So if you feel that, shake and bake
Cuz my boy A-Plee ain’t nothin fake”

The deep, emotional content of “My Last Good Deed” and “Good Time Charlie” create a balanced juxtaposition with the crossover mainstream appeal of “Patna Please.” At the same time, the hook of “Javelin” reminded me all too much of “What’s Hannin.” In a sense, the production, flow, delivery and choruses could almost be switched between the songs without the listener noticing any irregularity.

And therein lies my major problem with this album. When A-Plus settles down to tackle the more serious content on “My Last Good Deed” or allows his more soulful, relaxed production to come through on “A Beautiful Thing” and “Far Away” the results stand out. However, his more mainstream-oriented party tracks become lost in a sea of repetition and pseudo-mediocrity. It’s quite possible that I’ve been listening to the Hiero and Souls of Mischief albums too much and am thereby judging A-Plus by his work with his former groups. But how else is the listener to judge this album?

To be fair, the album is solid, a must-have for Hiero heads, or any California underground enthusiast. However, the fly-by-night hip hopper will find this less than accessible. A-Plus is better when he’s rapping with someone, causing me to enjoy his production more than his rapping. I understand that A-Plus doesn’t really care how the music community judges him, but if he wants to continue his well-honed musical reputation, he should tap into the lighthearted but serious content that made his previous work so amazing to listen to. I understand that he’s very content with his position and I don’t disagree that it’s well-deserved, but the future fans still need something to get addicted to.