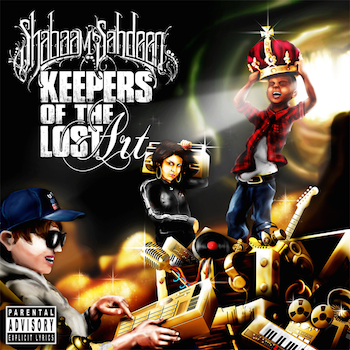 I’m not sure which surprises me more – that there have been five full length Shabaam Sahdeeq albums since 1999 or the fact this is the first one we’ve covered on the site. There was a time when he seemed poised as the next Brooklyn emcee to blow up, around the time of “Soundbombing 2” when he went bar for bar with rap star Pharoahe Monch. He was one of those dudes you could count on to make a memorable cameo appearance on any posse track or remix, not the least of which was Monch’s legendary “Simons Says Remix.” Unfortunately his career trajectory seemed to have been tied to the fortunes of the Rawkus Records label, and as they were unable to maintain their momentum in the 2000’s he was left to fend for himself. If you own all four of his previous albums before “Keepers of the Lost Art” then you’re either a super dedicated head or related to Sahdeeq in some way. I doubt the rest of us can find all of them.

Even though he’s not been the most high profile of emcees in the last 15 years, he hasn’t lost breath control or gone soft in the intervening years. He’s also loaded up “Keepers of the Lost Art” heavily to make a statement to those who weren’t paying attention or simply couldn’t cop his albums at any physical or digital retail outlet between then and now. At 23 songs and over 80 minutes in length this isn’t just an album – it’s damn near a double album. He’s also loaded up the guest appearances from some of the most well regarded underground emcees, so if you needed a break from hearing his voice that much you’ve got other people playing his previously famous role of being the hot cameo. Reks drops in on “Speak Truth,” Tragedy Khadafi proves they’re both “OG Certified,” Sha Stimuli and Wais P help him spit “That Dope” and perhaps mostly aptly F.T. (Fuc That) and Skyzoo join him on “The Come Back Kid.”

“Do You” has a similar sentiment sans the guest stars – answering all the people who thought he wasn’t still a hip-hop factor in 2014.

“Uhh – let’s talk about it, how you talk about me
Breed negativity – yeah I know you doubt me
I’m a clutch baller, score with only seconds left
Holdin my breath, release it when I sink it
What’chu thinkin – ahh, you hopin that I miss!
But I make the crowd go wild while you be looin pissed
On a search for perfection I achieve excellence
Optimist – stomp a mudhole in a pessimist”

The production on the album serves to buoy Sahdeeq’s confidence. DJ Dister laces tracks like “Done It All” featuring Bekay, the “Relax” remix. DJ Spinna flips the aforementioned “Do You” and “Motion Picture.” Lewis Parker handled the track whose lyrics opened this review – “Playing Games” – as well as numerous other cuts like “Walk With the Light,” “Seasons Change” and the slinky pimp funktastic track “He Who Dares.” Even short tracks like “Tranquilo” come correct thanks to Harry Fraud.

Shabaam Sahdeeq has a lot of weight to carry on “Keepers of the Lost Art,” especially given the album title seems to position him as the last of a dying breed of true lyricists adrift in a sea of trappers and dance rap novelty acts. Given that weight and pressure you can hardly expect Sahdeeq to hit a home run every time at bat – some songs are singles or doubles and a few are squib bunts. I don’t know that I’d listen to “Energon 2” or “Fall in Line” a second time – they’re not terrible songs that I need to stomp on but they’re just not that musically compelling. Sahdeeq benefits from his relatively low altitude on the rap radar over the years, because he doesn’t have to go all “Simons Says Remix” on every song here to be considered a success. I wouldn’t annoint him as the vanguard of the East coast or the savior of real lyricism, but he does just enough and just well enough to earn my respect on this album.