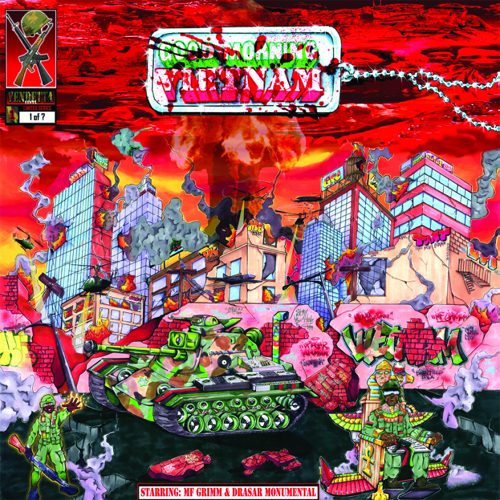 The story of MF Grimm proves that real life can be more compelling drama than any Hollywood film. In fact if you read his bio and thought it was exaggerated I wouldn’t blame you. He shared the stage with Tupac Shakur, got hit in a driveby shooting that killed his brother and left him paralyzed from the waist down, sold drugs to pay his hospital bills, and wound up getting busted and handed a sentence of four years to LIFE. Believe me when I say that’s the abridged version. If they did try to make a movie out of his setbacks and triumphs there’s every chance in the world it would either be horribly botched or wind up being 20 hours long. The chapter on his partnership and subsequent falling out with MF DOOM could be a feature film all by itself.

I’ve sat on Grimm’s “American Hunger” album for far too long. By my own admission that’s just because I didn’t know how to approach a TRIPLE album from Grimm even though I like him as an artist – it was just too much material to break down in a concise fashion. One of his fans sent me the “Good Morning Vietnam” EP though and after listening to it I’m reevaluating the decision to not do that review. Grimm isn’t an unknown per se – he’s been profiled in comic books, he’s been featured on NPR, he’s well regarded as a lyricist and yet to say he’s a “household name” would be an exaggeration. Grimm describes himself as “the hip-hop Hemingway” on the track “If You Don’t Know” though and I think that’s fair. Grimm has a similar penchant for penning his pain that you can hear pouring out all over the fourth song “Be Noble”:

“Was I born to suffer?
My soul burns like sulfur
Slept on like a sofa
Visualize future – I squint and see so far
I wish my belly was so full
then life would be so fine
Right now I’m so hungry
Beautiful struggle – I’d rather be ugly
I’m so famished, physically about to vanish…”

The film “Good Morning Vietnam” is sampled by producer and collaborator Drasar Monumental throughout the EP, but it’s a minor framing device at best. The album doesn’t follow the film’s plot, nor does it attempt to convey the struggle of protagonist Robin Williams’, but if he and Adrian Cronauer have anything in common it’s their struggle to balance the joy of life with all of its pain and strife. I admit to not being overly familiar with Drasar’s work – and after this EP I regret that. There’s not a track I can say I wouldn’t play twice; given that the entire EP is one 20 minute long blend that runs the songs together that’s a good thing. For anybody else the idea of a “Grand Opening” and “Interlude” two thirds of the way through the presentation might seem absurd, but Grimm pulls this TARDIS-esque feat off without having to use the temporal brakes once. His tribute to his mom on “Mater Matuta” is unique in hip-hop given his near death experience:

“There’s no one like thee
I celebrate the one who nurtured me
I thank you so much, that soothing touch
that healed anything that tried to harm me
Trailblaze, I seem to amaze
All who observe life you gave me
I understand the genius of your plan
for me to expand, become a great man
From my first breath to my near death
Your prayers alone is what saved me
Dying held hand, hourglass watch sand
Scared – Angel of Death might take me
I fought back so you didn’t have to lose me
You were happy the creator didn’t choose me”

Now I don’t want to go to unrealistic lengths and tell you that Grimm is the greatest thing since sliced whole wheat or that Drasar is the second coming of Pete Rock. I find Grimm’s wordplay pleasant, and his ability to dial back on punchlines makes lines such as “This rhyme is motherfucking dope – are you high yet?” more impactful than those who think every word has to be clever. As I said before he’s not wrong to compare himself to Hemingway because both use words economically – far moreso than I have in this review. Perhaps he’d chuckle at that fact if this review came across his desk. If I have been overly verbose though it’s only because Grimm’s story is much bigger than either this EP or this review.