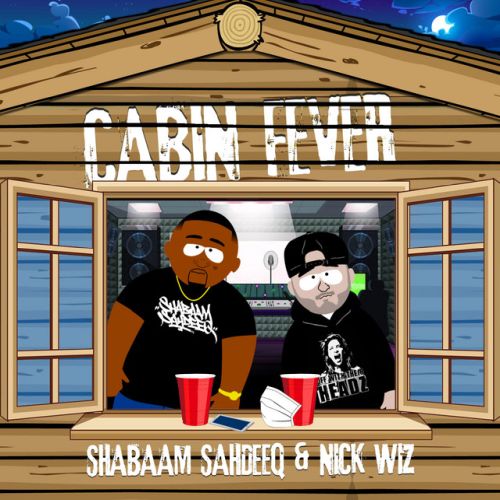 You can always tell when an artist has updated their Wikipedia page, and upon a recent perusal of Shabaam Sahdeeq’s, it’s noteworthy how there are numerous “[citation needed]” statements following bold claims. These include Polyrhythm Addicts’ “Rhyme Related” being “widely regarded as a hip-hop classic”, and “Sahdeeq’s recent work has been receiving rave reviews in some of the biggest hip-hop publications”. The last statement had me intrigued as Sahdeeq is a name synonymous with Rawkus Records’ glory years in the late 1990s but not one that comes up much these days. The fact he has joined forces with Nick Wiz, himself notable for his output in the late 1990s for refining rather than defining the New York hip-hop many have yearned to recreate ever since.

The two Polyrhythm Addicts albums are indeed excellent, yet also confirm why Sahdeeq’s star has never shone brightly on his solo material. He blew up with guest appearances on remixes and memorable tracks blended skilfully into classic Rawkus Records compilations. As solid an emcee as he is, it’s hard to place him alongside the likes of Pharoahe Monch, Eminem, and Busta Rhymes, who worked with in the late 90s.

“Cabin Fever”, much like its South Park artwork hints at, is an underground alternative that wilfully ignores society’s trends in favor of something genuine. If you’re expecting Nick Wiz from the 90s, there are countless releases that cater to that (this one, in particular, is recommended) but Wiz has tweaked his style over the years. “Unorthodox” is a bumpy start, but “Watch Ya Mouth” is typically tough, demonstrating Sahdeeq’s knack for delivering a tight, syllable-driven flow that excels alongside UG of the Cella Dwellas. “Thunderin’” is brief, yet brilliantly boisterous, and not hard to see why it’s the most streamed track here. The best track is “Masterpieces” – Sahdeeq injects menace into his delivery, to the point where you actually believe the ludicrous statement “all my releases are lyrical masterpieces”. This is prime Sahdeeq – convincing head-nod hip-hop you can’t help but slam your head to – but mainly because he leans into his strong accent that’s tailor-made for rap.

Most of this album (which, at twenty-eight minutes is stretching the definition of such), demonstrates Sahdeeq’s abilities, but “Worth It” is a strange inclusion. It’s oddly dated, boasting both a pounding aesthetic and autotuned vocalist and it just doesn’t work, nor fit in with the other tracks. It’s hard to see Sahdeeq’s loyal fanbase bumping this. I was also slightly disappointed by “Different Era” with Reks and Ran Reed. Two emcees that can still go, but the beat is too busy and the topic leans hard into the “it was better back in my day” narrative. “Just Do It” though? Hell yeah, this is more like it…

The inclusion of Sahdeeq and Wiz’s 1996 gem “Do or Die” at the end of the album still feels superior to the music that precedes it, perhaps an indication of how good their chemistry was in the 90s. The two Sahdeeq projects we have covered on RR both garnered 7/10s and that pretty much sums up this record too. Different writers may naturally have different ideas of what a 7/10 is (a topic for another day) but for me, that’s a good project. An 8/10 would be great, and I don’t think this is quite that, so while I wouldn’t go as far as saying this is a rave review, feel free to update Wikipedia accordingly. Sahdeeq and Wiz have still got it – no citation needed.