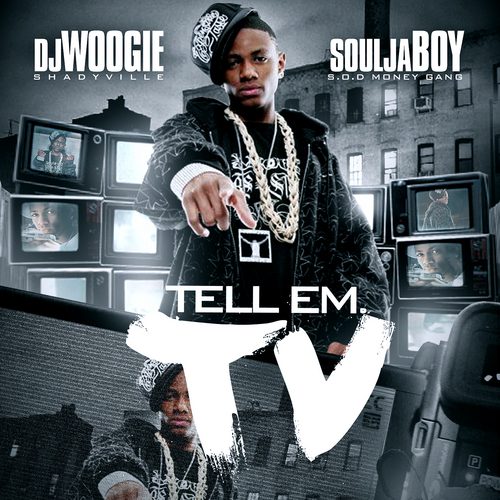 I haven’t been exposed to Soulja Boy the way most other rap listeners might have. I saw the video to “Crank That (Soulja Boy)” on TV once or twice, but that was it. Since then I only read about Soulja Boy. Now since when do I make my mind up about music by reading about it? When I’ll be deaf maybe. I felt all the more compelled to see what the fuss was all about as most things I read about Soulja Boy were negative. In fact, the more damning the verdicts got, the more curious I became. So much rejection? That boy has to do something right. With everybody from Ice-T to anonymous bloggers coming at him, Soulja Boy ranks among rap music’s most hated. I consider that an achievement. We readily accept empty rhetoric from thousands of rappers who make themselves important by claiming they’re hated on but fail to acknowledge when someone gets hated on for real, for all to witness? Soulja Boy haters should not even attempt to tell me they’re not hating because their hate clearly feeds off the love others show to Soulja Boy. That’s the beautiful thing about human reaction – where there’s hate, there’s love. There’s only one type of feedback artists and entertainers need to fear – the non-existent one.

In the Soulja Boy debate I silently sided with the ones who suggested to cut him some slack because he is, after all, still a boy. See, hip-hop was invented by high school kids. Even if some of the DJ’s were in their twenties, they were merely supplying demand for a specific type of music. Hip-Hop’s driving force, the crowd that came to dance, those that clamoured for breaks, were teenagers. Melle Mel was 14 or 15 when he attended his first Kool Herc party. The founding fathers of this hip-hop nation lived with their parents when they made history.

Then all of a sudden rap music got all serious. Some say it lost its innocence with the introduction of socially aware subject matter (i.e. with “The Message”), some blame the entertainment industry attempting to package and sell the street culture. Without a question maturity has been elementary to the evolution of hip-hop from ball park/street corner/night club amusement into an artform. The Furious Five, The Treacherous Three, Cold Crush, Whodini, Run-D.M.C., etc. can all be credited for that. Going into the 1990s, the rap market was densely populated with grown men: Rakim, Chuck D, Ice Cube, Too $hort, Kool Moe Dee, Big Daddy Kane, Kool G Rap, Brother J, Chill Rob G, KRS-One, Ice-T, Grand Puba, Lakim Shabazz, Freddie Foxxx, Treach… That’s not to say that rap didn’t indulge in ignorance, indifference and irresponsibility (typical traits of a teeenager) back then, but gangsta rap and its regional variations didn’t exactly provide an exceptionally youthful element, for that the music was too hard and too dark. Serious hip-hop that is recognized by critics is often for twens with relationships to mend, bills to pay, children to raise, discrimination to fight, cops to kill, revolutions to start and what not. Things kids couldn’t really care less about in their own lives, as willing as they are to let themselves be entertained and influenced by the world of adults.

Today there are more grown people in hip-hop than ever, yet in some circles it is still considered music for children, often by the same people who deem it not suitable for children. Another paradox is that rappers well beyond thirty crowd around the mic as if it was a fountain of youth, hoping to be forever Young (add nom de plume or nickname). These people claim to be ’80s babies when they were born in the ’60s, argue that the thirties are the new twenties, etc. Now where does that leave the adolescents, the age group that once created this thing called hip-hop? Are they conveniently confined to the status of consumers, minors willing to buy into any marketing scheme? That ain’t hip-hop. Hip-Hop is doing it yourself. Hip-Hop is having fun with it. To this day rap is so busy getting its grown man and woman on that when real kids appear on the scene to have a little fun by themselves, mature rap consumers and critics react like true adults and would like to ban all activities that might disturb their peace. Even liberal old me was sceptical when I heard the speculations that “Crank That” had a rather nasty sexual connotation to it. But in the end I’m more than willing to welcome a fresh face like Soulja Boy. (Just don’t think I forgot that the Mo’ Thugs family already had a Souljah Boy.)

And that (and so I could get the above off my chest) is why downloaded this free mixtape. To get introduced to Soulja Boy the musician. Turns out, time is running out on the whole ‘let boys be boys’ thing because Soulja Boy will not much longer be a teenager, which means I’ll have to wait for another poster boy (no rhyme intended) for the young generation. Going strictly by “TellEm.TV,” Soulja Boy has some of the basics down required to even be considered a rapper. He can flow and he can rhyme. This mixtape isn’t the HDTV display for these qualities, it merely hints at them because a substantial amount of recording time is taken up by adlibs, hooks, intros, sound effects, etc. That certainly is nothing new, nor anything I can blame SB for.

As far as the whole attitude goes, nothing here distinguishes him from your average rapper of the commercial southern variety on his mixtape break. Younger children who were infected by the “Crank That” dance craze and haven’t already forgotten Soulja Boy are clearly not this mixtape’s target audience. This one is for the so-called streets – provided they have internet access. One might argue that “Kiss Me Thru the Phone” feels out of place, but feel free to take that complaint back to 1985 L.L. Cool J.

Not to compare Soulja Boy to the teenaged L.L., though, because he simply has not the same fire burning in him. Attacks could be the ignition to spark such fire. In this mixtape’s case that would mean to deal with critics accordingly. “TellEm.TV” has some words for the haters, but really not much more. The intro invites them to “step y’all hatin’ game up,” but only once “Grind On” comes on SB seems to remember them: “Every day I wake up, man, another rapper or another nigga got my dick in they mouth or got my name in they mouth.” He shoots a few darts, but his aim lacks focus, and if once he’d be on target, he makes only half sense: “Niggas claimin’ Soulja Boy steadily killin’ hip-hop / Suck my dick, bitch, that’s why your album flip-flop.” Wait… what? In the end he nails it unintentionally when he says in “New School”: “Y’all niggas got questions but I ain’t got answers.” Am I foolish to expect answers from a rapper?

This is all the more disappointing as I felt he was on to something when in a recent video broadcast he went after Nas, arguing that Nas underestimated the power of words when he released “Hip Hop Is Dead,” causing the statement to be widely circulated and almost turn into a self-fulfilling prophecy. To stress his point, Soulja Boy recalled, “Some good shit to say is ‘I’m the best rapper alive.’ Just like T.I., that nigga said he the King of the South, can’t nobody take that from him cause he the King of the South. Lil’ Wayne sayin’ ‘I’m the best rapper alive.’ Niggas gon’ argue with that nigga, but at the end of the day they gonna say Lil’ Wayne’s the best rapper alive because he started sayin’ that shit.” Far be it from me to argue with Nas or Soulja Boy or anybody else about what hip-hop is and what it’s not or who’s the best rapper alive and who’s not, but SB is certainly correct about getting out what you put in.

As the mixtape plays, I find it hard to make up my mind about Soulja Boy, mostly because “TellEm.TV” is nothing to write a review about (but so are few mixtapes). Occasionally he displays the sassiness that could be his trump card, and I’m not so much referring to “This the new school, and I run this shit / I’m Soulja Boy Tell Em, you can suck my dick” type rhymes but rather something like the hook to “Easy”: “A fresh young rapper named Beezy / Soulja Boy Tell Em make this ish look easy.” If he can expand on thoughts like “Get the crowd stimulated / I make it look easy, you make it look complicated,” instead of trying to out-thug the next thug, he’ll continue to stand out from the crowd. And if not he still has the potential to come up with lines worthy of any rapping hustler or hustling rappper: “One day in my life’ll get your mind right / one day in my life’ll get your grind tight.”

As far as hostilities between hip-hop celebrities go, something like Ice-T vs. Soulja Boy is the last thing this reviewer wanted to see. Maybe the parties involved should consider the things they have in common. On “I Wana Go” SB complains that “bein’ a celebrity [is] not all that it’s put out to be.” He’d be advised to listen to Ice-T’s 1991 song “Lifestyles of the Rich and Infamous,” where very similar feelings are expressed. Whereas Ice-T needs to remember his own days in hip-hop and contemplate if the following Soulja Boy rhymes don’t mirror his own experience as a rap star:

“I can’t go to the mall, I can’t hang with my dogs
I can’t go back to school, I can’t walk the old halls
I can’t do what I used to, I had to get used to
livin’ this life, I barely get sleep, fool
Man, it’s hard work, but you gotta understand that
every day I’m grindin’ and it’s all for the fans”