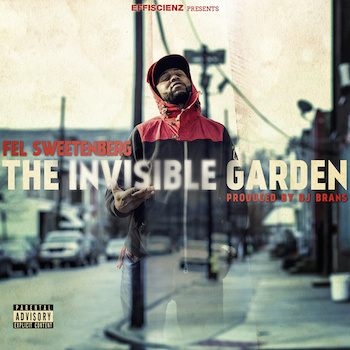 Wyld Bunch’s “Unbreakable” was a record I enjoyed last year despite finally tiring of the endless swathe of New York-throwback clones that have swarmed underground hip hop over the years. Wyld Bunch was likable enough, and benefitted from strong production from DJ Brans while throwing in enough cameos from respected emcees such as Sean Price and Torae. Effiscienz have continued their “sound” with the Union Blak album “Union Blak Friday” and this, “The Invisible Garden” by Fel Sweetenberg.

Sweetenberg may possess a name that belongs in a bakery rather than a CD rack, but ain’t nothing sweet about “The Invisible Garden”. It’s so easy to brand this another modern example of boom bap, but it’s not that Sweetenberg is a bad emcee, he’s just not really got much to say. “Hyena’s Den” is standard, passable New York hip hop that suddenly comes alive when DJ Djaz decides to savage some classic acapellas. “Power Stricken” is a similarly snappy track that will get your head nodding, but the verses just fail to leave a mark. It’s not exactly bland, or necessarily bad but it’s wholly unremarkable.

Production from DJ Brans is predictable yet satisfying, full of crunchy bass and crisp snares that are brought to life by DJ Djaz’s turntablism. If you’ve heard the Wyld Bunch album “Unbreakable” that was released last year you’ll know what to expect, although none of the beats ever really stand out here like they did on Wyld Bunch’s record. Thankfully at 10 tracks the record is digestible without ever getting tiresome. Saying that, “Shoutro” sees Sweetenberg embracing his sustainable side by just reading out a list of artists that he would like to thank or just ‘shout out’, something traditionally reserved for liner notes. It’s one of those “I ain’t ever gonna listen to this track again” moments that is an odd decision to include as the last thing the listener will hear on “The Invisible Garden”.

It’s likely I won’t ever return to “The Invisible Garden”, but it had the makings of a decent project. DJ Brans is usually reliable, but underwhelms here. Sweetenberg throws down some braggodocious statements without ever really convincing us of his lyrical ability, and while DJ Djaz kills the hooks on five songs, it’s not enough for this listener. Given that 2014 has blessed us with a ton of great music already, “The Invisible Garden” is an apt name for this project in that it lacks natural chemistry, visual narratives and sense of achievement that a garden deserves. Room for growth then.