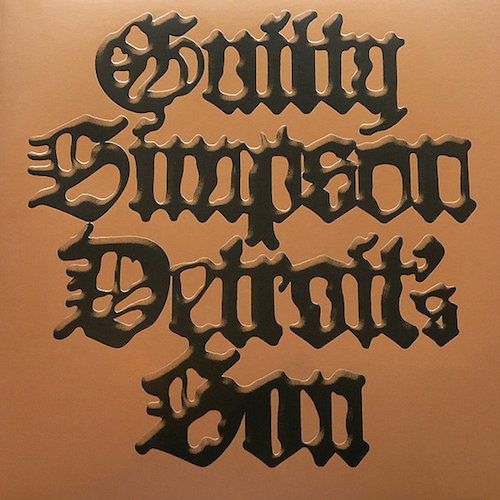 Detroit rapper Guilty Simpson is like the Arnold Schwarzenegger of rap. He is incredibly effective at being a badass, but not the most versatile or emotive of performers. He doesn’t sing and he doesn’t do features with R&B divas. That might sound limiting, but in the hands of the right producer, Simpson can drop fire. He’s responsible for at least two of my favorite rap songs of all time (“Coroner’s Music” and “Pigs.”) He’s found the right partner on “Detroit’s Son” in Aussie producer Katalyst, who is part of the Quakers crew. In fact, “Detroit’s Son” may well be his strongest release to date.

“Detroit’s Son” has a similar feel to Freddie Gibbs and Madlib’s 2014 album “Piñata.” It’s tough as nails rhymes over warped funk samples, with the rapper and the producer actually collaborating. Simpson spent time in Australia with Katalyst, and the face time they spent together pays off. They have the kind of chemistry that is hard to obtain if you are just Skyping and exchanging files in the cloud.

Much of “Detroit’s Son” is Simpson giving tough guy raps over menacing beats. He starts off on “R.I.P.,” rapping, “The bigger the yap, the bigger the slap” while Katalyst lays down a beat that sounds like a race car warming up. Katalyst manages to make funk guitars sound threatening on “Blunts In the Air,” one of several tracks dedicated to the sweet leaf. “The D” is as cold and unfriendly as the city it is about.

“Rhyme 101” might be the best example of Guilty in grimey mode. The beat is funky but punishing, and Guilty spews venomous bars:

Guilty is so good at being a villain that it is easy to forget that from day one that has only been a part of his rap persona. One of his earlier tracks was the Dilla-produced “Man’s World” about the tortured relationship he had with his father. (“I’m sorry about the bruise on your face, you understand? I still love you, I’m still your old man.”) One of Guilty’s talents is the way he can rap about the harsh realities of life without it coming off as maudlin or pandering. “Ghetto” is a great example of this. It starts out your standard cautionary tale about life in the ghetto, but what Guilty is really rapping about is how our own behaviors and thinking can trap us.

The title track, “Smoking,” and “Say What?” all offer more cheerful beats and rhymes, which adds variety and makes the harder songs hit that much harder. There are a couple moments on the album where Guilty’s blunt flow doesn’t totally connect, but those are few and far between. When I first heard Simpson ten years ago, he seemed like the antidote to mediocre backpack rappers. Nowadays, he sounds like a soldier doing his part to preserve a type of hip-hop that feels almost like an endangered species. “Detroit’s Son” is proof that Guilty Simpson is far from done, and that you don’t need to be able to sing hooks in order to be a compelling rapper.