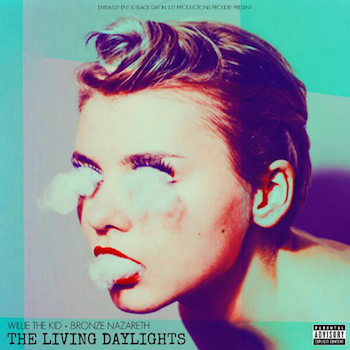 As far as Wu-Tang production goes, Bronze Nazareth has been delivering soulful beats that knock harder than a heavy-handed postman, for over a decade now. “The Great Migration” still stands out as a reminder to hip hop heads that some of the better Wu-Tang material of the 2000s came from the outer branches of the Wu family tree: Killah Priest, Trife Diesel, Hell Razah and Bronze himself. Now that we are well in to the 2010s (the teenies?), with Wu-Tang still living on through solo projects and the odd compilation piece, Bronze has reached out to Willie the Kid, an emcee perhaps not best known to many, yet a guy that has frequented the mixtape scene for a number of years now. His association with the likes of DJ Drama helped launch him to a wide audience, collaborating with heavyweights such as Bun B and Gucci Mane. Having a link to the Wu-Tang Clan before he even picked up a mic (Willie is the cousin of La the Darkman, a Wu-Tang affiliate), “The Living Daylights” feels like a natural fit for his street stylings – much like how Freddie Gibbs found a match in Madlib on “Pinata”.

“The Living Daylights” happens to be the name of a well-loved James Bond film from 1987, and the espionage thriller theme is evident through much of Bronze Nazareth’s production here. It’s classy like a Vodka Martini, and a testament to Bronze’s ability that it doesn’t sound like your typical Wu-Tang affiliate album. “Breakfast In France” best demonstrates this, and the decision to recruit Roc Marciano for “Avalon” is perfect, although finds Willie inevitably being out-rhymed by the former U.N. member. Willie himself applies a technique not dissimilar to Action Bronson’s – utilising vivid, expressive vocabulary that is unfortunately hit-and-miss. Thankfully, it’s more hit than miss thanks to the strength of the instrumentals, but there are occasions where you’ll be nonplussed rhyme-wise. Overlooking that, there are some gems in the form of “Bless My Food”, “Fucking Blades” and “Sweet Sorrow”, all examples of Willie’s ability to craft descriptive narratives. Given the smoothness of the soul samples, topics rarely veer from women, fine dining and extravagant living, but it’s all tastefully executed and delivered in a passionate manner so it never feels tacky or boastful.

Sha Stimuli is an oft-forgotten emcee that is known to occasionally blow hot lava in to a microphone, and if his guest verse on “Delirium” isn’t turning heads then that’s a damn shame. Despite being placed in between Willie the Kid and Sean Price (aka the heir to Bumpy Knuckles’ declaration “King of the 3rd Verse”), Stimuli steals the song with some rhymes you’d expect to hear from top tier battle rappers:

“Pass the preacher that scrap with ether, you rappin’ divas,
I can’t compete with your fatty features and Happy Feet, but I
Smack your teeth with the back of heaters, my tracks are deeper
Bitch I’ve spazzed on beats since I had a beeper
Matter (of) fact I had a trapper keeper, a pre-teen, I disperse my hurt
I don’t just bury my foes; I make them turn in dirt
Observe my thirst as my over-wordy verse will murder jerks
I’m at your doors like October 31st”

For what it is, “The Living Daylights” is remarkably consistent. There are the obvious stand-out tracks, but the rest never fall below decent, lending the album a strong, cohesive feel that you’ll return to. It won’t be often, and it isn’t likely to be remembered as fondly as Bronze’s work on “The Great Migration”, but as far as 2014 collaborations go, you can do worse than checking out the slick sounds of Bronze Nazareth and Willie the Kid.