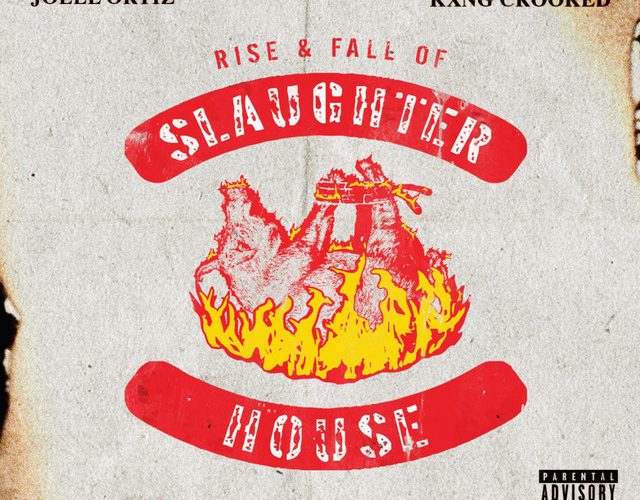 Joell Ortiz and KXNG Crooked’s “Rise & Fall of Slaughterhouse” is less of a follow-up to their 2020 collaborative effort “H.A.R.D.” and more of an explanation for the hip-hop supergroup’s split. It became evident that the break-up was acrimonious during an Instagram Live video chat back in early March between all four Slaughterhouse members which went south with angry accusations and insults regarding the release of this album. But with Joe Budden retiring, Royce da 5’9” on a solo tip, and conflict notwithstanding, the remaining two members remain dedicated mic technicians.

“The Birth Intro” starts off the album and it’s comprised of vocal samples from Sway and Talib Kweli praising Slaughterhouse as a group and individually. It stands in juxtaposition to the subsequent songs which detail the reason for the group now being defunct. The organ-driven DJ Silk-produced “Ain’t Nobody Mad” shows their rap skills are intact and that the group is unquestionably done. Ironically, the hook sends the message that though the group break-up is old news, people will still tune in to listen anyway because drama is addictive. “Flood Waters” is the second of three tracks laced by DJ Silk, who loops an R&B sample for Crooked and Joell to spit wordplay-laced bars like “Every strap got me feeling like I’m wearing wet clothes / Gun like a dick sucker in a hearing aid, it’s giving deaf blows” and “Ironically a heart pops up but it’s no love that come with that / Twerk video, run it back, share a death post then double tap”.

The Blakk Soul-assisted “Vacancy” is the first single off the album. Produced by the Heatmakerz, it’s sample-based with church organs and feels very personal, especially Joell’s verse. They’ve been detailing why the group broke up, but here we hear how they feel. In many ways, the single may give closure to some hardcore fans of the group:

The final DJ Silk track is “Smoke”, and it’s more boom-bap sounding than his previous tracks. “Fukglasshouse” is about not looking to what could’ve been, namely what would’ve been the title of Slaughterhouse’s third full length album, “Glass House”. NYC-based beatsmith Hesami produces the next two tracks, “Brothers Keeper 2” and “Almighty”. The former incorporates child choir voices over 808 drums as Joell and Crooked take a welcome break from the album’s theme and spit some customary battle rhymes they’re known to do. The latter is the better of the two: It’s more sample-heavy with multi-tracked vocals, ambient sounds and triumphant horns. And Crooked spat the following bars that are rewind-inducing:

“Bust a cap ’cause I’m hardcore, double back, that’s an encore
Couple mask in a duffel bag and a hunnid racks in the car door”

The tool of extended metaphor at first seems to be put to use on “Coastin’”, produced by DJ Pain 1. Both men appear to cast the blame itself for Slaughterhouse’s split in the form of a person, but it becomes clear they’re referring to Budden. “Still In My Feelings” is a different turn for the Heatmakerz’ production as it doesn’t come off as vintage sampling and both emcees are at their most intense on this point in the album. While the Fong Sui U-laced “Look Mama” is a dedication to their mothers, the second single “Backstage” has a chipmunk soul to the production that would’ve worked on the latter track just as well:

Closing out the album is an ‘80s R&B-sampled produced track laced by the Heatmakerz entitled “Sorry”. Lyrically, it’s also a lamentation for the group’s break-up. In the aforementioned IG Live feed between the former group members, it was mentioned that Budden didn’t know about this album being released until then. Also, considering the album’s main content, those two factors categorically shifted the LP from being a concept album to more akin to an unauthorized tell-all book. Lyrically, both Joell and Crooked haven’t lost a step. But aside from the unrelated songs, the ones exemplifying the album’s break-up topic become grating after not too long. Musically, it’s backed by solid producers, but “Rise & Fall of Slaughterhouse” is overshadowed topically. The topic is so incessant that this listener wavered between apathy and that old Howard Jones song, “No One Is To Blame”.