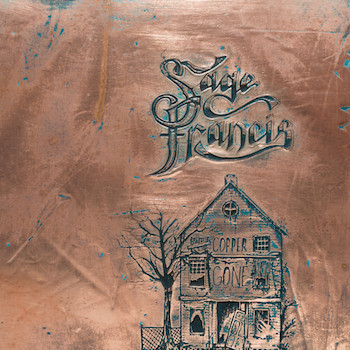 “When you think you got it all figured out and everything collapses, trust me kid, it’s not the end of the world.” Those were the final words to Sage Francis’ 2010 album, “Li(f)e” from a song called “The Best of Times.” That album (and that song in particular) was one of those life changing records that I have re-visited countless times over the past four years, and those final words were a source of comfort for me in the hardest parts of my early 20s. Francis’ first album in four years, titled “Copper Gone,” often strays from the uplifting message of the final couple of bars of “The Best of Times.”

“Copper Gone” is noticeably darker and more personal than “Li(f)e,” which was a hyper-focused album that revolved more around folk tales and politics than the more confessional and autobiographical style of his early work. After several traumatic events in his personal life, Sage Francis remained secluded in his home for four years – a prominent theme throughout the record. On the extremely intense “Grace,” Francis raps about a failed relationship over a haunting piano:

“This is a music box that haunts me from the top-shelf of the bedroom closet
I don’t touch it, it just cuddles with my conscience
I’m on constant guard, jittery the whole night
Clinging the sheets because it sings to me slow like
And that’s her song running through an hourglass
Built with two wine bottles that I found in a flower patch
Planting it in quicksand, refusing to sink fast
Abusing me slow, I hear the music and I think back
Before the fall, before the set up
Before the interest in sex even developed
I fell in love with distance as an ex’s best friend
There used to be revenge, but I couldn’t see no end
So I had to switch the lens in and focus on some flesh
No more clinging to old threads”

On the equally emotional and heart-breaking “Thank You,” Francis grieves his father, whom died while he was on tour back in 2010. But the most soul-crushingly depressing song on “Copper Gone” is “Make ’em Purr,” which details Francis’ seclusion:

“It’s been forever since I said something that I can’t wiggle free from
If there’s anything I cherish in this self-inflicted prison, it’s freedom
Comes at a cost so I’m private to a fault til I default
On the loan for home, it’s actually more like a vault
No one knows the combo but little old me
The head honcho, the holder of the key
Alone, but never lonely
It’s been a millennia since I left this dominion
Been in the company of any women
At least I got my kittens
Spent more cash on my cat than I did myself
When he stopped eating, I took him to the vet so they could check his health
They put a feeding tube into his neck
I said “Please let this work cause if it doesn’t I got nothing left”
I didn’t say that, but they saw that. Cat had my tongue
I didn’t speak at all, they told me to call back
What, it wasn’t weird I did nothing but stand right there?
With a “fix this, money’s no object” type stare
It’s been a year since I stepped into anyone else’s private quarters
I’ve been busy self-diagnosing disorders”

The song does however end in a more positive note, as he raps: “My 20s were a roar, my 30s were a blur, My 40s I’m not so sure, but I’m a make ’em purr.” While much of “Copper Gone” is pretty bleak, there are some uplifting moments on the record as well. On the excellent lead single “Vonnegut Busy” he raps “when it feels like you’re going through hell, keep going.” And after several allusions to his house in Rhode Island, where he stayed as a recluse, he raps on “Say Uncle” :

“Need to keep my head up, at the same time drop my shoulder
To plow through the nonsense, since I’ve gotten older
I’ve replaced too many parts in this motor
Mama said ‘knock down the house – start over'”

The production on “Copper Gone” is also a stark change from “Li(f)e” which featured live, bluesy instrumentation. “Copper Gone” has Francis rapping over more traditional hip hop production from previous collaborators such as Cecil Otter, Buck 65, Prolyphic and several others. This record also includes a few battle rap tracks including the high energy opener “Pressure Cooker” and Francis may or may not be taking a few jabs at Macklemore on “ID Thieves” as he raps:

“Why you think I let you get away with doing radio-friendly versions of what I do?
I wouldn’t chide you, out perform, out write, and out rhyme you
Outsmart, out heart, and out grind you
Out shine you with the torch that was given to me
Torches and I’ll pass it to bastards of the little league
If rap was a game you’d be M.V.P
Most Valued Puppet of this industry
Get your I.D, Independent
Fuck you.”

Last month fellow indie rap legend, Atmosphere released “Southsiders,” which I would consider their weakest album they’ve ever released. I argued that Slug sounded very uninspired and lacked a lot of the fire he had on previous releases. That album made me question whether certain artists struggle to find inspiration when they reach a certain level of contentment in their lives, as Slug is now settled down with a happy family. But Sage Francis, who is at more-or-less the same place in his rap career, seems to be just getting out of some of the hardest years of his life, and “Copper Gone” is certainly a reflection of that. It’s also among his best work and he raps with the passion and fury of a rapper on his first LP. If aforementioned, “The Best of Times” was the wise Uncle Sage patting me on the back, telling me it’s going to be okay, then “Copper Gone” is Sage admitting that even in approaching your 40s, no one ever truly has life completely figured out.