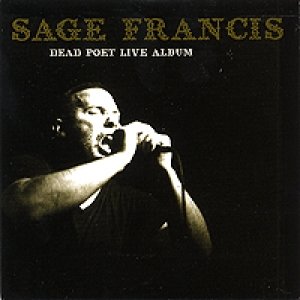 Rap music originated as a live art form. It is one thing to produce excellent material on wax, but the voices truly come alive during live performances. An artist’s work stands by itself, but when they are able, as Rakim said, to “move the crowd,” it is an entirely different experience. There are few things more exciting than seeing a favorite artist wild out on stage. This is the inherent beauty of Sage Francis’ “Dead Poet, Live Album.” Not only does it capture the artist at his emotional best, but with a live band backing him, each song becomes deeper and more unique than it ever was before. This isn’t simply a collection of live versions of Sage’s favorite songs, it stands as a new work of its own. The words are the mostly the same, and the melodies are familiar. The texture that Gruvis Malt adds to the mix, however, as well as the live performing of Sage Francis, creates something very distinctive and downright exceptional.

Choose any one of your favorite songs. Now imagine that it could be seamlessly recreated with a new, unique twist. In my case, it could be the magnum opus “Makeshift Patriot.” Gruvis Malt’s guitars and heavy organs grind away at your soul, while Sage elevates the original to new heights with his passionate delivery. It is easy to envision him bobbing up and down as he screams through the speakers:

I was lucky enough to be in attendance for a “Live Band, Dead Poet” tour stop about 15 months ago in Seattle. My enjoyment of this song is only enhanced by my recollection of the American Flag he had wrapped around his body, and the force with which he delivered each syllable. Even without this memory, the opener to “Dead Poet, Live Album” will stand as a remarkable and distinctive piece of music, for Sage fans and haters alike.

One who is familiar with the full-length “Personal Journals” might recall “Specialist” as an average moment on an excellent album. It certainly did not stand out. This is what I love about “Dead Poet, Live Album.” Not only does Gruvis Malt inject new life into the live version, but the new instrumentation makes it the best cut on this entire album. Smooth guitars are combined with a much heavier section during the hook, and the result is a standout song amongst a group of great songs. I give all the credit to Gruvis Malt here. These indie rockers tear the music of the original down and build it back up from scratch, their way. As much as Sage Francis does on this record to recreate his music, the backup band is the driving force behind the transformations that take place.

If only “Majority Rule” were longer than one verse. The backup band sticks to the script on this one, and the version found on this album is strikingly similar to Sage’s classic, with just a touch of variety to spice things up. Sage skips two verses too many, and leaves this one before it really gets started. Following this painfully brief tune is “Rewrite (50 Ways),” harmonic horns and all. If you were wondering how this would be executed, just take a listen. Gruvis Malt’s versatility on this disc is ridiculous. These guys apparently can do everything. I was just waiting for them to bust out with a sonata as a bonus track. It really wouldn’t have surprised me at all.

Much has been said of Gruvis Malt, but they are simply providing more instrumental depth for Sage Francis to rock over. And rock he does. Sage’s stage presence is clearly evident here, he doesn’t just go through the motions. Sardonic wit shines through when he calls his landlord on “Slumlord.” He drops a few spoken word pieces for us as well. Just for fun, special Rhode Island versions of “Time of the Season” and “White Wedding” are even thrown in. If his intelligence and emotional depth were not evident on “Personal Journals” or the “Sick” series, they will be here. He is in his most intimate environment on “Dead Poet, Live Album.” This is Sage Francis at his most expressive and inspiring.

Nearly all of your favorite Sage Francis songs are here. “Crack Pipes” is resuscitated with a new twist, as Sage shouts:

“Bring me to your hiding place, so I can face your vice grip
I’ll chisel every single monkey off your back with this ice pick
Come meet up with me on the sidelines when the game is over, just to say hello
Then afterwards, backstage, to let me know that you enjoyed the show”

“Bang Bang Boogie” and “Come Come Now” explode with a new intensity as well. “”Broken Wings” and “Inherited Scars” show his emotional side like never before. Fans will be pleased, and non-believers just might be converted. It is astonishing that he is able to flip the script so completely, without even releasing new material. If you had any doubts about this emcee, they will likely be erased with a couple of listens. He has never rocked over better music, and it pushes him to new heights.

If I could register any complaints about this work, I have a couple. First off, my favorite song of Sage Francis’ does not appear. Hearing “Narcissist” with live instrumentation would have been incredible, and I can’t help but be disappointed that it is not included. My second complaint really can’t qualify as such. The quality of the sounds that Gruvis Malt provides actually renders some of the original tracks obsolete. I can’t picture myself ever listening to the first “Specialist” again. Ditto with “Inherited Scars.” I’m not going to pretend that this album ruined Sage Francis’ other albums for me, but there are a few renditions that just blow the original versions away. I guess if the Beatles had released a newer, more aesthetically pleasing version of “Revolver,” no one would have complained. It is a little disconcerting, though, to know that because of “Live Album” I will be less likely to pop “Personal Journals” into my system in the future.

Turntables and a microphone are the original live hip-hop instruments. This formula has undergone quite an evolution, with groups like The Roots pushing the creativity forward. Sage Francis’ live disc doesn’t show that much innovation, but it still stands as an excellent piece of music. Each number explodes with a rawness that can’t be found on his other albums. There is sadness, humor, and arrogance. Gruvis Malt adds just enough texture to make “Dead Poet, Live Album” work by itself in the context of his entire catalogue. If listening to this doesn’t get your head bopping and your brain working, then Mr. Sage Francis is just not for you.