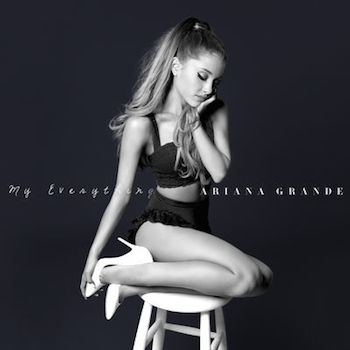 At 21, Grande is already eight years deep into a career that has spanned singing on cruise ships to singing in a Broadway musical to starring in a Nickelodeon show to releasing a debut album and touring with Justin Bieber in 2013. “My Everything” is her second album. Grande’s main attribute is her voice, which is somewhere between Christina Aguilera and Mariah Carey. (The fact that she is good-looking doesn’t hurt either – there aren’t any plain female pop stars, after all.)

I get the sense from the music and marketing for Ariana Grande’s “My Everything” that she and her handlers don’t quite know what to do with her. Is she a teen pop idol or a dance diva or an R&B singer? Is she the squeaky clean Nickelodeon star or is she a sexy sexy grown up? Does she let the focus be on her singing chops, or does she hide her range with layers of Auto-Tune and EDM? The approach seems to be to try and maintain multiple conflicting images at once, even when they are contradictory. It seems to be working for her, but it’s confusing.

To start off with, Grande is old enough to drink but doesn’t look old enough to vote. Her barely-legal looks give a creepy sheen to her sexed up image. She’s posing in lingerie and heels on the album cover and she’s wearing a miniskirt and high-heeled boots in most of her marketing material and videos. Yes, Grande is a grown-ass woman and can dress however she wants to dress and get as sexy as she wants to get, and no, she’s not nearly as trashy as Miley Cyrus or “Dirrty”-era Christina Aguilera. However, while it seemed like Miley and Xtina’s hyper-sexualized image was driven by the artists themselves, with Grande it just feels like a management-imposed marketing strategy. They are trying to get her to land somewhere between girl next door and high class call girl. Sexy enough to differentiate her from her Nick days, but not sexy enough to scare any of those fans (or their parents) off. Her sly, coquettish looks to the camera in “Problem” are stiff. Her hip-grinding is desultory and phoned in. It all feels as scripted and test-marketed as a Hollywood blockbuster starring an actress who is fulfilling a contractual obligation. Her visual presentation doesn’t seems to be connected with who she actually is.

Grande’s voice is ostensibly why she is famous, and to their credit the producers give her room to show off her impressive chops. She gets to do some full-on belting on ballads like “Just A Little Bit of Your Heart” and “Why Try.” They don’t trust her enough to actually let her voice carry the songs though; the metallic fingerprint of Auto-Tune is all over “My Everything,” even the vocal trills that start off the album. I understand correcting the pitch of an artist who isn’t a strong singer, but why mess with the vocals of someone who can actually sing?

Speaking of producers, “My Everything” assemble a huge international crew. All the songs but the intro have more than one producer, and “One Last Time” has five. No song has less than three songwriters listed, and “Break Your Heart Right Back” has six. That’s a whole lot of chefs to craft a three minute pop song. The benefit of having so many people involved is that the end product is well-position to acquire maximum market share across multiple platforms with significant cross-promotional potential. A song like the A$AP Ferg track “Hands On Me” has the snaps and whistles of club rap with some big EDM synths to smooth it out and prevent it from appealing only to the Urban market. “Love Me Harder” has the indie R&B/chillwave thing going courtesy of the Weeknd, but given a pop makeover so that it isn’t too weird for the Walmart crowd (who get exclusive bonus tracks when they buy the album from the mega-retailer). This song-by-committee approach pays off, to a certain extent. As much as I might dis “My Everything” for its lack of sincerity, it’s not a bad album. In fact, I kind of like some of it. “Problem” is a perfect combination of hip-hop sass and Mariah Carey worship, “One Last Time” and “Break Free” are big dumb dance songs done with style and class, “Bang Bang,” which is available on some deluxe versions of the album, is a great song, although Jessie J. and Nikki Minaj are the ones responsible for its greatness. Ariana Grande’s music may not be my cup of tea, but it doesn’t suck.

The same can’t be said for the rappers who accompany Grande on the mic. Iggy Azalea, Childish Gambino, A$AP Ferg and Big Sean all share verses with Grande, and they all fall on their faces. They fail in a few different ways. Azalea’s verse would almost be good if it wasn’t her rapping them. I’ve always admired how Australian rappers adapted the music to their own idiom and slang, so it’s a shame to see that the most well-known Australian rapper sounds like she’s doing an impression of someone from Brooklyn. Big Sean’s verses on “Best You Ever Had” aren’t bad, but he’s having to deliver them as ballad rap which makes them clumsy. Childish Gambino and A$AP Ferg both sound neutered by having to give PG-rated raps. Listening to them is like watching an episode of the Brady Bunch directed by Quentin Tarantino. They are playing far outside their strengths and most of their standard vocabulary and subject matter are off-limits. You can tell Ferg would really, really like to clearly state where he wants Ariana’s hands on him, and if the song was just aimed at hip-hop radio he would.

There’s a couple of well-worn paths ahead of Grande. Since we love to tear down artists, and especially female artists, a backlash is inevitably coming. At some point she is going to have to shed her teeny bop image for once and for all. I don’t think she could pull of Taylor Swift’s whole “every girl’s best friend” thing, which even Taylor is having trouble maintaining. She could go full slut like Christina and Miley and Britney, start dry humping things, make out with Madonna, maybe date a woman for a minute, but that doesn’t seem like Grande’s style either. She could have a public meltdown like her idol Mariah, then try and make a comeback, maybe in an unflattering acting role. Personally, I see her having a hit with a big anthem from a Disney movie and then going back to Broadway, which is where her voice seems most suited.

I was at a wedding recently where a twelve-year-old girl jumped up onstage when “Bang Bang” came on. She danced and lip-synched to the entire song, putting her hand on her ear when Grande’s part came on, like a singer checking her monitor. I may not love Grande’s music, and I am definitely not her target audience, but seeing a young girl connect with it was a heartwarming experience. Grande’s music and image may make no sense to me, but it’s connecting with millions of people to whom the lines between R&B, hip-hop and dance aren’t as rigid. That is no small feat.