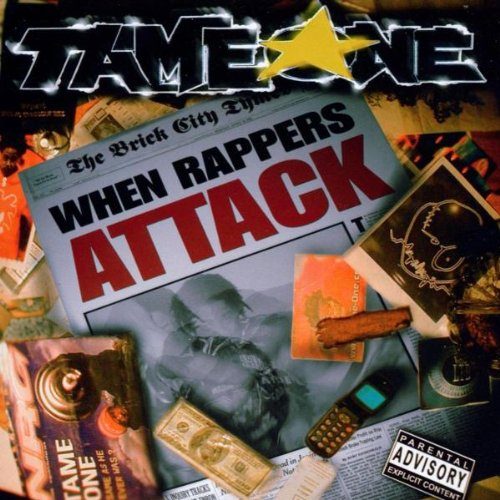 Tame One :: When Rappers Attack

In all fairness and with the full intention of keeping these reviews ethical, you the reader deserves to know I was the former webmaster ofRapReviews under my belt; I didn’t have the 100% time to devote to developing and promoting his shit correctly. Fortunately it all worked out for the best – I was able to work it out with Ma D to pass web hosting and maintenance to a close friend of mine, and he’s blown Tame’s site up ten times bigger and better than I could.

Back to the present – after wrecking indie singles like “Trife Type Times” and “Crazee” while simultaneously shopping around his songs to various labels for a new deal, Tame finally found a niche with Eastern Conference Records and landed a guest appearance on their “All Stars Volume II” compilation with his clever update of Slick Rick’s “The Moment I Feared”:

“I gave her the information then she went on her way
I went home and took it down til almost two the next day
Someone’s ringin my bell, I opened up, word bond
It was Brenda half naked with an edible thong!
Tried to soup me and seduce me and at first I wasn’t with it
Then she licked it and I hit it then we did it and WE DID IT
She said it was great, she said she’s glad we had done it
I walked into the bus, but Money Grip was on it!
It was the moment I feared.. (Yo what is you doin
with your hand all up in my girl’s ass dude?)”

This was only a warm up though, because Tame had more bullets in store for both his old school fans and for the new kids who never knew the Notty Headed Terror from Newark, New Jersey. On “Volume III” he floored heads with the J-Zone produced “Tame as It Ever Was.” Zone’s always been known for hot beats for his Old Maid Billionaires fam, but he didn’t slack when it came time for Tame to cut the track. With fast fiddling violins, pounding bass, dramatic breaks and the classic King Tee line “I’m just anxious to whoop some ass” scratched into the hook, the Tame ol’ shit turns out to be better than ever:

“Due to certain circumstances I be takin chances
I prove it to the masses with a passion, I do it for the action
I confuse the psycho-analyticals, with lyrical, material
Imperial raps, up in yo’ stereos
Here we go (what) another blackout, recorded locally
Totally, but this it’s all supposed to be
Anti-socially is how I’m livin, fuck a guy
Youse a nice guy? You finished last and I’m the driveby
From a Wiseguy, Goodfella, far from Fugazi
A problem with yo’ shit? Fuck you, pay me!”

Both of these songs can be found on Tame’s new album “When Rappers Attack,” tentatively scheduled for March 25th. For those who had been sleeping on Tame all these years since the last Artifacts album “That’s Them” dropped in 1997, this album will be quite a revelation. His voice has deepened and sounds even more throaty and blunted than it did back then, and Tame doesn’t hide his love for the buds one bit. In fact, when teaming with Cage on the Mighty Mi produced “Leak Smoke,” he takes it to a level BEYOND that:

“See what I’m sayin like comic book thought bubbles
I’ve been in and out of jail for my multiple court troubles
+Menace II Society 2+, starrin me
With more chemicals up in me than yo’ favorite pharmacy
It’s obvious as high as I get, I should be mindless
Behind this fetish for those formaldehyde sticks”

In other words kids, don’t try this at home. Whether he’s exaggerating for effect or speaking the plain truth, it’s clear either way that Tame finds that the papers are as good for rolling blunts as for writing rhymes on. Linked up with Conference friends and family like Camu Tao, RJD2 and Johnny Dangerous on the beats, Tame is finally getting his long overdue push back up the ladder of underground hip-hop. The casual observer might only see Tame as a punchline MC (and don’t get it twisted, he drops bombs with the best of them) but closer inspection reveals a writing that varies between stream-of-concious and complex lyrical concepts. “Concerto” is a good example:

There are only a few problems with “When Rappers Attack” and they are relatively minor. First of all the album (this promotional copy at least) is very short in an era of long solo releases, clocking in at under 40 minutes. Of course GZA said “keep it half short and twice strong” and Tame certainly tries to live up to that motto, but you’re still left wanting more. A few more songs with the directed message of “Iz it Me” would also have been appreciated; a track where Tame correctly criticizes the majority of rappers out today as “Matrix carbon copies [..] with songs that sound sloppy.” This is also not an album meant for people who like light songs. Though he doesn’t needlessly spray bullets around like an overzealous gangster rapper (he’s more likely to spray a can on a wall) there’s a generally dark and menacing mood to his album which molds well to the title for it he chose. For people who have already come to know Eastern Conference for high quality rap LP’s aimed at hip-hop heads, Tame One fits nicely into their roster and his album fits nicely into their catalogue. Old fans from back in the day won’t be dissapointed and new jacks will want to check his Artifacts records after they hear it.