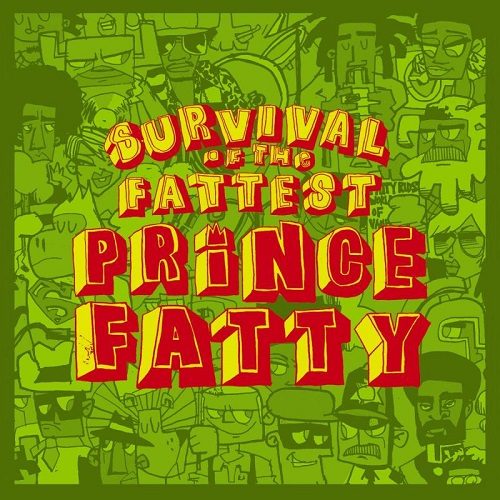 Prince Fatty :: Survival of the Fattest

Prince Fatty is not a single individual but a group – a group obese in size if not in weight. British producer Mike Pelanconi conceived of Prince Fatty as a crew whose sole goal was to produce a limited-edition single for the 25th anniversary of StÃ¼ssy, a streetwear clothing company launched with reggae and hip-hop style in mind (note to readers: I don’t own a single piece of StÃ¼ssy apparel). Apparently Pelanconi was either more successful than StÃ¼ssy had intended or his goals were more ambitious than he had let on because “Ninas Dance” became an underground UK hit and Pelanconi decided to make the temporary group permanent.

Listening to “Survival of the Fattest” takes me back to the crystal blue waters and warm tropical breezes of Nassau, one of the most relaxing places I have ever been lucky enough to spend five days in. Everything on this album is real cool and irie. “Don’t Give Up” featuring Little Roy lopes casually along, promoting a love and peace vibe “so we don’t have to fuss and fight,” reflecting Pelanconi’s passion for the positive reggae records of the 1970’s. Some songs feature passionate vocals from legends like Winston Francis such as “Big Man Cry,” other songs such as “The Fat Panther” rely almost entirely on organs, piano keys, conga drums and horns to wrap you in a soothing melody.

Pelanconi’s music sounds 35 years out of date and yet remarkably timely. If the only reggae you’re familiar with is the energetic delivery of Elephant Man, the gruff dancehall of Shabba Ranks or the pop stylings of Sean Kingston, you need to dig a little deeper into the archives. Prince Fatty reflects the soulful sounds of Bob Marley and the Wailers, Jimmy Cliff, Toots & the Maytals and so forth. If the tempo ever crosses 100 BPM you’ve ripped the CD incorrectly or changed the playback settings on WinAmp. The song titles may unintentionally make you hungry for a good meal with titles like “Cow Foot and Gravy” or “Milk and Honey,” the latter of which has lilting vocals from Hollie Cook. Even “Mr. Freeze” could imply a cold soft serve on a warm tropical day. Even when you think things might get HOTTA with a title like “Switch Blade” the song is completely absent of menace or malice. If anything the title might describe the trap set in the background, seeming to snap and clap along until the horny horns come in to funk things up.

“Survival of the Fattest” closes with “Gin and Juice,” and believe it or not this is A ROOTS REGGAE COVER OF SNOOP DOGG. I’ve heard many different covers of this hip-hop classic presented as a spoof or a good, but the translation really fits here as the group takes Snoop’s LAIIID BACK to a whole new level of relaxation, smoking some good collie weed as they’re rolling down the street. While “Survival of the Fattest” may be a little too mellow for the modern dancehall fan, those who grew up with classic reggae tracks be they songs of peace or protest will find the mellow vibes of Prince Fatty perfect to, well, roll up a fat one to!