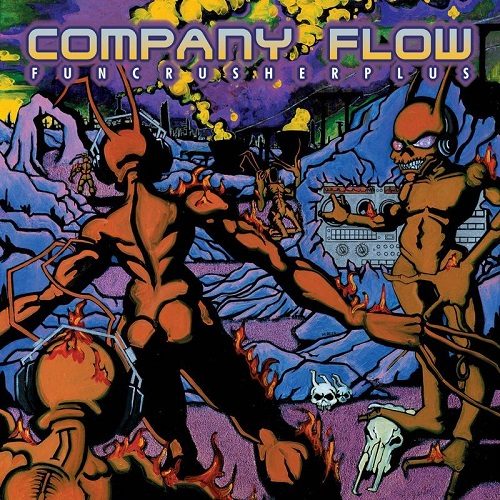 Tall tales of the South often include unbelievable tales of a miner swinging his pickaxe at a rock and missing – striking earth and unleashing a huge gusher of crude oil airborne at the point of impact. We all know such implausible scenarios only happen on TV shows like “The Beverly Hillbillies”; yet in 1997 this very circumstance was on the horizon of New York hip-hop. Bubbling unseen underground, Company Flow’s triumverate of artists was just waiting for that one lone pickaxe to strike dirt and unlesh their liquid audio gold into the air.

Enter Rawkus Records. Partially funded by Daddy Warbucks (actually, Rupert Murdoch) but looking for credibility in East coast underground rap, Rawkus turned to Official Recordings. Company Flow has already released “Funcrusher” to some minor success and critical acclaim, so the idea to repackage the album as a “Plus” with extra tracks for a larger audience was a perfect match. Even though Rawkus probably smelled success from the jump, they had no idea the sensation this record would make when released to the mainstream.

The elements all fell into place perfectly – El-Producto providing the majority of the beats, tag-teaming with Big Juss on the raps, and DJ Mr. Len providing the quintessential scratch for a perfected hip-hop sound. Lots of underground groups can claim to have equally dope rappers and producers, but Company Flow achieved a gestalt where the sum of the sound was greater than the parts. Lyrically they did not shy away from complexity; in fact, the obscurity of the content became their calling card along with beats that were so heavy they could be called SUMO.

For the purchaser, it all starts with the cover art – a surreal purple backdrop of ant-like aliens flexing their mandibles and jamming to music on their headphones. Inside, underneath a clear orange plastic tray, El-Producto is brazenly waving his middle finger as Len and Bigg Jus look on, with the motto “Independent as Fuck” inscribed beneath. Surely you grasp the concept – Company Flow feel like outsiders in their own world and instead of being accepted they’d rather be outlaw renegades. El-P’s lyrics reflect that attitude on the song “Legends” when he raps, “Fuckin with your theology like Darwinism in the Bible Belt.” That’s not one-tenth the length of brutality El-P displays on the ferocious “Population Control” though:

“Co Flow mossie, Walt Disney meets Kaiser Soze
There will be no grand comebacks unless Lazarus or Kotter
Inflicted bitch styles indicate with stigmata
when locked in a box but you can’t say Jack
Trying to paint them fucking red doors black
Like that spilled milk spoiled
While Bill Gates and Ted Turner rub each other down with olive oils
Company Flow, fuck please
Bitch put away the fuckin piteous punchlines
Blue Blockers break under the red light, belittled by my design
I don’t try to be different, I am
So inevitably my style will survive when your now turns to then”

The flows on the song are spit at an incredibly rapid pace, but the spooky beat crawls along with a boom kick, boom kick boom with water (or is it blood) splashing in the background. Listening to this song made the small hairs on the back of my neck stand up, and at the same-time caused uncontrollable head-nodding as the vicious boom bap travelled down my spinal cord. Song after song throughout has the same effect: the lushly beautiful “8 Steps to Perfection”, the incredibly thunderous “Collude/Intrude” featuring J-Treds (with the classic El-P punchline “Got your hip-hop essence out of the Cross Colours catalog with analog technology; ask L. Ron Hubbard to break down my Scientology”) and the sitar music of the all-star Indelible MC’s track “The Fire in Which You Burn” including Breezly Brewin and J-Treds. Sitar music? If you’ve never heard this eeriely beautiful form of Middle Eastern music, there can be no better introduction to it than J-Treds triple entendre rap verse masterpiece:

“Relentless poetic rhyme never ceases infinity
Forever smokin the mic lyric contact I be open
Naturally high and no need to pass the Dutchie
I’m the living circle circle dot dot, nobody can touch me
At my post, the most high exalted, mind blower
When I rap it it’s strictly ‘I can’t believe he just said that shit’
Material crews, who can’t think straight sober
My flows over your head, I enjoy the aerial view
Focus from the bird’s eye, in my scenario, of dominance
Filth eatin weaklings, we’re bumRussian/rushin like dirty communists
Raisin, my Iron Curtain revealin my words the gospel
No apples or giant serpents, the enlightened apostle”

The most oft-quoted line from this song is El-P’s cryptic, “Even when I say nothing it’s a beautiful use of negative space,” even though the entire song is basically twelve issues of “Hip-Hop Quotable” hardbound into one volume for repeated viewing – and even that’s an understatement. In fact, trying to capture the sonic beauty of this album is as challenging as deciphering their rhymes. Weaving together internet references, Japanime, science fiction, comic books and pop culture into a giant tapestry leads to snaps like Big Juss’ “You couldn’t hang if you was bit by a radioactive spider” on “Krazy Kings”, but such random quotes will not do this album justice. Not only does this LP mine the depths of resistance to mediocrity, it even dares to dig into El-P’s own personal tragedy by recontextualizing a Kool G. Rap line to form a story of how his mother was a battered wife on “Last Good Sleep.” This album doesn’t just take chances, it shatters conventions.

Ultimately, that was probably the success and failure of this album. Even though it was 1997’s “must have” album for fans of rugged and raw hip-hop, the well that sprang forth was tapped out too quickly. Rawkus used Company Flow as the fuel to push their label forward, and soon developed into a “twelve inch of the month” operation where each single was the next “must have” for every DJ. Sure the CD moved units, but promotion was basically non-existant outside New York – where were the music videos or club tours? Rawkus got the credibility they wanted, and Company Flow got to release a hip-hop masterpiece – but to this day many people who recognize El-Producto for his beats or guest appearances on other rap songs have still never heard this album. Admittedly some people will never feel it either – the fast and furious rhymes often rely on beats only as a reference point and spill haphazardly all over the music. This album is not for everyone, but then some people won’t eat caviar because it’s too salty either. For the discerning rap fan, “Funcrusher Plus” is a 19 course gourmet meal with “Bad Touch Example” as the appetizer and “Funcrush Scratch” as dessert at the end.