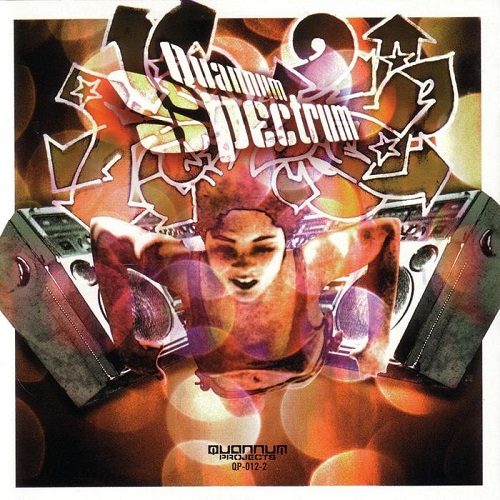 The representation of independent hip-hop in it’s purest form, for better and for worse, defines this compilation album. If you’re familiar at all with the best underground albums in hip-hop of the past few years then you’ve probably heard the projects that they put out under the California label Solesides: material such as Blackalicious’ “Melodica EP” and Latryx’s self-titled debut. They are probably better known though for better or for worse by DJ Shadow’s on-and-off-again collaborative status with crew.

On “Quannum Spectrum” Shadows does produce some of the album’s best tracks, such as the innovative “Storm Warning” by Latryx, the collaboration “Concentration” between Quannum MC’s and Jurassic 5, and the Lyrics Born solo song “Hott People”. The latter is an example of everything that Quannum does right when all four cylinders are firing in order and the oil keeps high RPM’s from cracking the block. Just peep the cleverly revealing and humerous lyrical wordplay by Born:

Cause I can’t part with the alcohol, no doubt bruh
And on that note, I’m like my Southpaw Grandpah
He used to get his lamp on, he used to giggle at Tampons
And I’m probably not supposed to talk about that part
who cares though that’s not important
I really broke all the sample laws with this damn song
so now I’m an outlaw

You can’t help but smile as you listen to his rap and tap your feet to the flow of the disco-esque beat. These former Solesides affiliates have the potential to make many great songs like this; however, this is far from a perfect album. The heavy and confusing “Divine Intervention” by Divine Styler sounds like a poetry reading from rock hell, “I Changed My Mind” has a plausible beat but Born’s singing doesn’t really cut it, and the Quannun MC’s/Hieroglyphics duet “The Extravaganza” is actually OVERpowered by the MC’s who are too verbose for Lyrics Born’s thin beat.

The biggest drawback to the entire compilation is the continuing presence of so-called radio personality Mack B-Dog, whose voice is a constant irritant and serves as entirely the wrong person to present the Quannum spectrum to a world at large which is probably not familiar with the talented ex-Solesides posse. Removing his introductions and interludes probably would have made room for at least two or three more songs and more interestingly provacative collaborations like Latryx’s duet with El-P of Company Flow, “Looking Over a City”. Held back by a mediocre host, several mediocre songs, and the unfulfilled promise of tracks that just don’t hold the weight of their album’s own contemporaries, “Quannum Spectrum” becomes a must have only for diehard fans of the underground. You’d be better served to wait for the full-length Blackalicious album “Nia” due out this fall or the next project from Latryx or DJ Shadow.