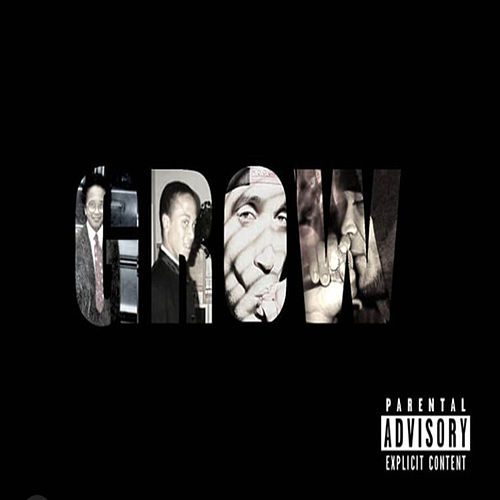 Tampa-based rapper Albert J has recently released his sophomore album “Grow“. With beatmakers Leto Beats and Vpollo producing the majority of the tracks, the musical aspect of the album is heavily rooted in trap influences and with very few that are sample-based. On the surface, the lyrics are appear mostly braggadocio concerning the wealth and material possessions frequently referenced in trap. However, Albert has a certain depth to his rap skills as an emcee that separates him from other southern emcees. He adds a certain level of concept raps to some of the songs as well. Moving in an upward direction from his debut album “Youth Religion”, concepts of growth and balance are espoused throughout the album quite regularly, with some songs having dialogue samples as a coda to drive the point home. Despite the eventual monotony of the musical backdrop, Albert’s lyrical dexterity and multi-faceted composition of himself both more than make up for it. Though the opening track, “Gimme That”, threw me for a loop with the way it utterly bleeds trap music, nearly everything else after it reminded me to not judge a book by it’s cover, even if said book and cover are both conveyed through an audio medium.

The production is primarily helmed by Florida-based beatmakers such as VPollo and Leto Beats, mostly. Rounded out with two tracks from fellow Sunshine State-based beatsmith known as Arlanzo, they complete the synth heavy, melodic hook-laden, 808 neck-snapping trap sound which ranges from mellow to menacing throughout the album. But finding a balance is a theme in this album, and with its commercial backdrop and Albert’s lyricism, that no doubt poses quite a challenge. The two tracks on “Grow” which attempt to tackle this dichotomy are the “Remember Interlude” which parodies modern day rap fans’ perceptions, and the Leto Beats-produced “Listen”, an ambitious 8-minute long composition which is both musically and topically erratic.

Lyrically, Albert exhibits two influences on him as an emcee and his choice of beats. The first influence is Locksmith, in that he has an adaptable flow and engages in the practice of fitting many multi-rhymed syllables within a bar (though he isn’t as adept at this deftness as Locksmith is). The second influence is T.I., largely because of the trap sound and southern solidarity, but also because he doesn’t have a reliance on punchlines or over-the-top similes. Additionally, these influences shine most where Albert is at his best: On tracks without assistance from guest rappers. “Listen” was one of the solo tracks and its ambition in its length (not to mention its early appearance in the tracklist) rendered any outside lyrical support unnecessary. “Problem” and the summer-night sweat evoking “Random Thoughts” are two solo tracks which showcase his nimble emceeing capabilities.

“Grow” has only four tracks containing guest appearances, which consist of Kennedy Blvd, Frank Sherwood, and Haitian-Canadian rapper blackmontreal. While the latter doesn’t steal the show from Albert, blackmontreal certainly brings his A-game even in a guest capacity. The VPollo-produced “Stop Playin” has him standing toe-to-toe with Albert. On a side note, the ending of this song has an infomercial sample about karma and how it relates to balance. The track “Rise”, produced by Leto Beats, is something of a “show & prove” for everyone involved in the track’s creation. With payback at the heart of the song, Albert and blackmontreal adopt double-time flows, rapping circles around their opponents and detractors over foreboding musical backdrop in what turns out to be one of the best tracks on “Grow”.

As the album comes to a close, the music maintains its trap elements, but adds more atmospheric sounds to the production. “Slick (Trippin)” has a psychedelic vibe to it that goes hand-in-hand with the song’s echoing vocals. “Take Away” is an introspective track focusing on the anxiety and uncertainty that comes in everyday life. “Used to Be” has Albert flowing nice over the lush beat with his raps as multi-tracked vocals in several portions of the song. “The Vent” (featuring Frank Sherwood) is an atmospheric head-nodder for sure with its infectious synth keys. The song then deviates into a somber guitar riff with no drums, and it’s something for Albert J to rap reflective rhymes over, I suppose. Albert J can spit, that’s not a question. He’s got several different flows and topics, but the balance he was hoping to attain in this album is within his reach, but not yet within his grasp mainly because of how the choice production can become tiresome in certain parts. Despite this, “Grow” shows promise in Albert J’s rapping ability.