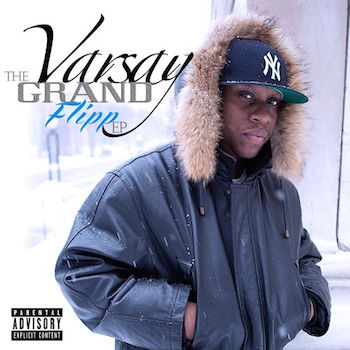 Varsay has the benefit of good timing. I was one review away from a dozen new articles for the website this week when his EP hit my inbox. I knew there was enough time left in the night to check out this eight track release, which is really only six songs if you skip over the intro and the outro. That’s an easy bite to digest.

I’d like to give you some background info on Varsay, but the e-mail from Hya Def didn’t include a bio about him, and neither his Twitter account nor his Soundcloud reveal anything about him. I’m going to guess “#EastCoast” based on one of the hash tags he uses and New York based on the fitted cap in the cover art, but who knows for sure? There are few production credits, but I suspect he wouldn’t want many – some of these cuts are very familiar.

One of the songs that actually lists a producer is “Find a Way” from DJ Semi, which has a pleasant hybrid sound that’s somewhere between Alchemist and Kanye West, a personal narrative tale with religious overtones in the chorus begging God to “see us through” on the journey.

“Her name was Elaine with a mean suck dick game
Used to switch lanes just to lick on the clit rang
Usually in her gang, she the first to let the fifth bang
In a driveby even shot, at her sib-langs
Livin by ‘water was thicker than blood…
… all of this shit because, she wasn’t loved as a young one
Her younger sister was the loved one, with that assumption
Her brain became dysfunction”

It’s not bad. The sinners seek salvation story is a familiar one for hip-hop, but Varsay handles it well, and has a decent raspy vocal tone that makes him sound like an amalgamation of Lloyd Banks and Tony Yayo. One of the few other credited tracks is “Sip Slowww” produced by Don P, a fairly generic song about living a flashy cash-flaunting lifestyle while enjoying inebration to the point of “forget(ting) abut every little thing in yo’ past.” Again it’s a familiar topic – one Varsay handles ably – without either messing it up or improving upon the story told so many times over so many glasses of champagne.

I suppose what I’m dancing around here is the fact that I’ve got nothing against Varsay per se, but I’ve also got no extraordinary reason to recommend him either. He’s polished enough, his flow is consistent, and aside from the occasional homophobic remark (not an excessive amount) there’s nothing distasteful about his lyrics or delivery. He seems like the kind of emcee you would enjoy as an opening act if more established rappers were on coming to your city on tour and asked who wanted to warm up the crowd tonight. You’d hit the merch table after and see his CD on the table for ten bucks. Maybe you’d buy, maybe not, but other than the fact he’s a likeable fella you’re just not compelled to drop a Hamilton. Maybe a Lincoln though.