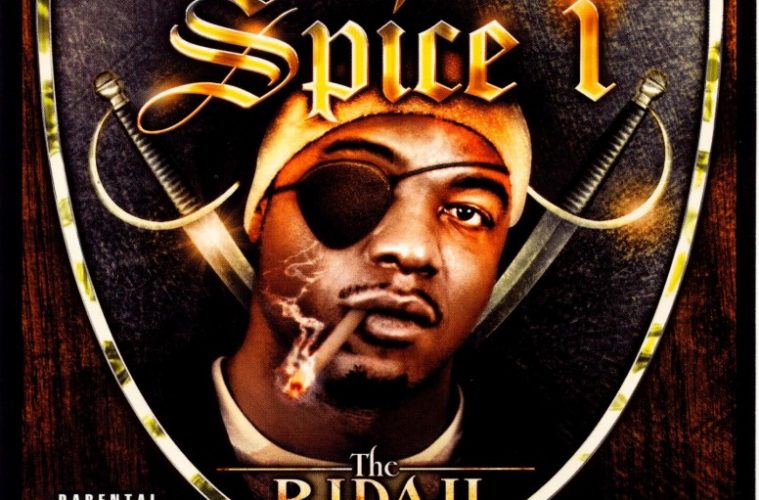 Looking at Spice 1’s new album, one could easily mistake the legendary West coast rapper for an equally legendary one from the East – Slick Rick. Seriously, if you look at the cover of this album and this picture, can you tell who is who? Without the caption that said Spice 1 on the former, there’s no way you’d know from looking. Listening is another matter altogether. While Spice 1 may either be emulating or paying tribute to Rick with his artwork, he certainly doesn’t have MC Ricky D’s sing-song London tinted flow. Born in Byron, Texas but raised in the California, Spice shocked the world in 1992 as the self-confessed “East Bay Gangster” whose style and attitude were both “187 Proof.” During the 90’s he completed an incredibly powerful West coast trifecta for Jive Records, with Too $hort holding down the pimptastic sex rhymes from Oakland and E-40 always bordering on the edge of commercial crossover with his inventive Vallejo stylings. Spice 1’s lyrics and delivery have always been hard and uncompromising, whether they were as blood-soaked as “Clip and the Trigga” or “Nigga Gots No Heart” or as thought-provoking as “Nobody Want Work” and “Three Strikes.” While he may not have achieved the sales success of either of his compatriots, his street credibility was unmatched and his loyal fans made sure Jive would be foolish to cut him loose.

It’s somewhat ironic then that after recording an album appropriately titled “Immortalized” in 1999, Jive Records told Spice 1 to seek his fortunes somewhere else. Some might have said that Spice no longer fit in with the direction of the label, given that his style was nearly a polar opposite to the increasing success Jive was having with teenybop artists like N’Sync and the Backstreet Boys. Indeed most of Jive’s hip-hop artists ended up seeking their fortunes elsewhere in the late 90’s or early part of this century, from the legendary KRS-One to the loquaciously ambidextrous Keith Murrary. Oddly enough, the two rappers who have survived the pruning of Jive’s rap department are E-40 and Too $hort. Go figure. Spice has been keeping busy since then, releasing no less than six albums in the last four years. Prolific? Oh fo’ sho’. Still hard as fuck? No question. And what does he think of his critics, doubters, and perhaps most importantly of all the label who pimped him for a decade and then dropped him like a bad habit? Well “The Ridah” has an answer for all three, and it’s called “Kizz My Azz”:

Spice 1 hasn’t compromised one bit. It’s no surprise that a selection of Cali all-stars still want to roll with the legendary “Ridah” from the East Bay. You can find Tha Eastsidaz making some “Gangbang Music” with Spiceberg Slim. “Pimp Pizzle” with Dru Down unites two of Cali’s finest for one unapologetic ode to straight macking bitches. Kurupt drops in to help the Black Bossalini make sure it’s a “Thug World” for hardcore MC’s, where Spice even gives a lyrical tribute to Rakim which may catch some know-nots by surprise. The most surprising thing on this album though by far is “U Gotta Take It (One Day at a Time),” a duet between Spice 1 and 2Pac. It’s certainly not unprecedented though, given that ‘Pac always showed love for the West coast and the Bay in particular, and that he recorded “Jealous Got Me Strapped” with Spice for “AmeriKKKa’s Nightmare” before his untimely demise. The only question is whether this is an undiscovered gem that finally got cleared (Amaru Records is credited in the liner notes) or a new track made with unused vocals. Either way, ‘Pac shines on it:

“Sometimes it’s hard, to wake up in the mornin mind full of demons
I don’t wanna hear ’em any more, got me heartbroken
Why? Too many babies screamin
cause they seein destruction ‘fore they seein human beings
So they start smokin weed, we’ll never get our day
Until we learn to pray Keep our families in shape cause they all broken
Why, do ghetto birds die, before we learn to fly?”

Why indeed. Still the guests only appear on one-fourth of this album’s tracks, which means for the large part Spice 1 is holding it down for dolo. His message is pretty clear throughout – I’m still hardcore, but also a little bit wiser for all the things I’ve seen in my time. Spice can flip his verbals in a variety of styles and tempos, but the format that suits him best is a fat chunky funk that moves along slow and allows him to really emote his words. It’s not all about gunplay on “The Ridah” because after all G’s like to have fun too “Behind Closed Doors”:

“Lustin for your brown skin and your soft thick thighs
On the freeway, with a hard dick, doin 125
Keep it hot baby, rub it if it start gettin cold
So much passion, love it when you stay in that mode
I was knockin on the door before she hung up the phone
She opened it up and pulled me in by my collar, and it was on
We did some hardcore fuckin, looked dead in her eyes
as I got front and back, and side to side
Lift yo’ legs up baby, throw ’em over my shoulder
Bout to dog shit, let you see the Range of my Rover”

That’s the true Spice 1 shit, being funny and nasty all at the same time. He’s always got an edge to his rap where you can never quite be sure if he’s serious, but you should never take him for a joke. Songs like the Indian-tinged “Reckless Eyeballin” and the horny horn funk of “Boomin Pistols” prove that – Spice is always ready lyrically and musically to not only start some shit, but finish it. While my compatriot Matt Jost was a little dissapointed with the 2002 release of “Spiceberg Slim,” I’m a little more upbeat about the future longevity of Spice 1’s career here. At one point it seemed like the over-abundance of new material might be watering down Spice’s content and killing off the enthusiasm of even his most loyal fans. “The Ridah” though shows Spice has found focus in his work. Having already accepted that he is “Immortalized” for his decade plus of work for the West coast and the Bay in particular, Spice can settle in to doing things his way on whatever label he chooses to work with. He may not be the big name he was in the 1990’s, but Spice 1 is far from being finished. Track three says it best – Spice 1 is “Still Here.”