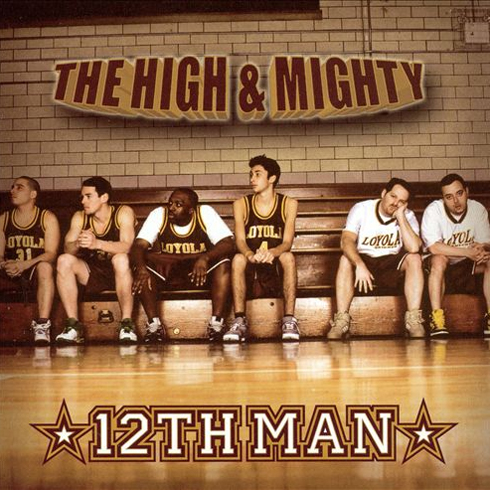 Being the 12th man off of the bench can create a swirling paradox of ridicule and knowledge. On one hand, you’re the kid who gets less play time than a naughty toddler but on the other hand, the 12th man cannot be underestimated due to the experience and preparation he gains from watching teammates at their best and at their worst. The Philly duo, the High & Mighty, know what it’s like to receive minimal play from the rap world. After two quality LPs, a solid EP, and the formation of a formidable independent record label (Eastern Conference Records) they still haven’t quite made it to the upper echelon of underground hip-hop. However, this group has noted the pitfalls that some stars of the rap game have succumbed to as heard on the aptly titled “Dumb” where a ruthless Eon spits “I’m 50 Cent dissin’ Ja Rule and then 12 months later sound exactly like Ja do.” They even had beef with Nelly because he stole their sneakers. Actually, he made the song “Air Force 1’s” after the group dropped an EP with the same title. It’s obvious these pine riders have been salivating to show the crowd how to properly win the game.

Anyone who’s slightly familiar with this veteran tag team, or have read their previous reviews on this site, knows that this group isn’t going to blow you away with timeless lyrics or the catchiest sound you’ve ever heard. But you would also know that they’ve become as reliable as anybody to deliver rugged underground hip-hop to your eardrums. You could even say they almost resemble the legendary Gangstarr. The MC, Mr. Eon, is a highly respectable rhymer like Guru even though the “oooh’s”, “ahhh’s”, and tears will be much less numerous than those garnered by the lyricists of highest acclaim. Although few could ever contest DJ Premier’s talent on the boards, Mighty Mi does create a consistently raw sound that makes the wack go home and keeps the best on their toes.

“Wonderama” features Eon’s raspy baritone flow over a high-pitched choir that gives the song the perfect amount of contrast. Eon lets us know it ain’t when you come in the game, it’s how you play it when you’re there:

“Advance money is a hell of a drug
Now you dance funny, you a hell of a thug
The worthless murderous, burn this curses
I don’t give a flying fuck if you heard’a this
Why me? I’m like why not kid
I’m in living color like the Wayan’s brothers did”

One of the highlights is when Eon and Tame One play tag over one of the hottest beats on the album on “Barbershop Quartet.” Tame’s crisp voice and faster flow provide some needed diversity. With humming voices that resemble a masculine version of the vocals heard on the Beatnuts’ “No Escapin’ This,” the beat provides a banging jingle that’ll stay stuck in your head like a Manchurian brainwashing chip.

Later on in the record we catch a glimpse of the irritation that accompanies unpopularity. As any frustrated 12th man would do, Eon disses the starters as well as the weak players that join them on the bench and steal their playing time on the autobiographical “Outta Here.”

“I used to hear these independent rap groups
Rhymin’ over loops, wearing Ecko Red running suits
Me and Mi didn’t rock that
We sported Nike kicks and those Kelly Green throwbacks
I rocked them till Hi and Mi blew up
And right until all these stupid hipsters fucked it up”

For the 2nd string:

There are very few, if any, lazy filler tracks. Each one is stamped with the High & Mighty sound and is going have that organized unpolished feel to it. Whether it’s the pulsing bass on “Damaged Goods”, the waving strings on “This Babylon” or the creative beat comprised of different people saying “dumb” in different tones on the previously mentioned “Dumb”, it’s clear that Mighty Mi can hold it down on the boards.

Although all seems good and well with the album, the 12th man isn’t on the bench because he’s the most talented; he’s there because he has flaws. The problem here is the lack of variation throughout the record. Eon rarely tries anything new with his flow or delivery, and much of the lyrical content consists of battle raps. A pessimist would find it boring and repetitive. An optimist would find it consistent and reliable. And I, being a realist, find that it shows a shortage of originality that’s countered with straight up talent. If you’re into dirty, rugged hip-hop that isn’t extremely gangster or you just want to cheer for the underdog, then you’ll find some friends way on the far side of the bench. However, if more people recognize game and give props where they’re due, then you might find these guys, in their Air Force 1’s, dribbling the ball out of their own court.