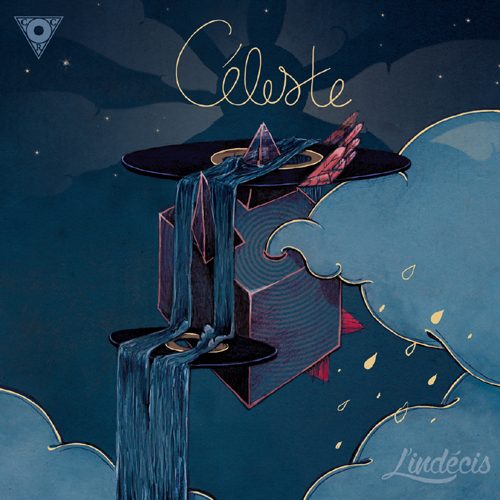 We’ve never had a “France Hip-Hop Month” at RapReviews. I suppose that’s because none of us here speak fluent French, although it may also be because most of our contributors are from the United States or the United Kingdom. Accidentally or by design that leads to a bias towards rap in the English language, even though there are plenty of dope French speaking artists I have enjoyed despite the language barrier – Ale Dee and IAM both come to mind. If you can flow to a hot beat and showcase rhythm, breath control and charisma while doing so the language doesn’t matter.

Now obviously you can’t just count from one to ten (un, deux, trois) and make a rap song out of no matter how charismatic you are… or can you? Perhaps someone can prove me wrong. Again as long as you are speaking intelligently about your situation the language doesn’t matter – as the Geto Boys once pointed out “an editorial for another day.

For an album like L’indécis’ “Céleste” though language turns out to be completely beside the point. Though you might have guessed he was French by the artist name or album title long before this paragraph, he’s a PRODUCER as opposed to an emcee, which means he’s speaking the most universal language of all. No translator is required, you don’t need to fire up Google Chrome first, it’s all here for you. “Two turntables and a mic?” Nope – skip the mic. All L’indécis needs to move you are the sounds he hears in his head that he’s found a way to translate from his brainwaves to your ears with beats, samples and melodies. The result is a mellow and jazzy hip-hop funk heard on songs like “Brume.” I did translate the song title though out of curiosity and it means “Mist” or “Haze” – both of which feel like suitable explanations of the mood the track evokes – it’s like being lost in a cloud.

The cover art for “Céleste” suggests hip-hop abstract art, with vinyl records suspended in the sky over geometric shapes, waterfalls cascading down them from liquids siphoned off clouds. At least that’s my interpretation – but “abstract” isn’t just Kamaal’s favorite word – it means you can see something different in it based on your own mind’s way of arranging the pieces. “Lost” is like that as well – a song whose title needs no translation. L’indécis is cleverly bending the musical elements that make up the track, making things appear to be out of whack when the song was played back, until you realize that the tempo stays consistent throughout. You wind up getting “lost” in the song yourself, listening for the wavering notes, only for L’indécis to abandon them for about a minute then bring everything rushing back in for the final third of the song.

The press release accompanying “Céleste” described this album from L’indécis as “a trip to a strange and un conventional world of exploration that’s layered with atmospheric and subtle vocal samples.” That’s true to a degree, but it’s not as strange as you might think. Now if you’re looking for a pure boom bap aesthetic it’s possible that L’indécis might not suit your fancy, although I’d say the album’s self-titled closer still fits that bill. I can say this much though – if you appreciate the instrumentals of acclaimed producers like Madlib and Oddisee there’s nothing “strange” about L’indécis at all. This is music that transcends cultural and linguistic barriers.