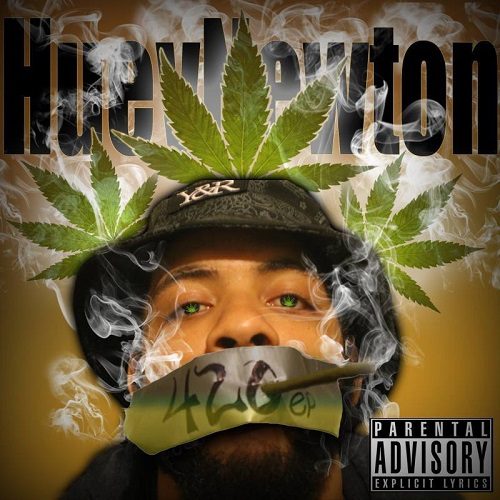 Smoke ’em if you got ’em. It’s no longer April 20th, but it’s probably 4:20 on the clock somewhere in the world while you’re reading this. This unofficial holiday for smokers has long had a tradition of enjoying herbal stimulation, and as Huey Newton says himself on “G.S.L. (Get.Stoned.Live)” it’s “a blunt a day to keep the pain away” philosophy – err – philoso-PHAY? Whatever bruh.

If you’re going to celebrate the virtues of medical or recreational cannabis on an album, 4/20 is certainly the time you want to drop your release, as it’s an easy way to score points with your fellow smokers. There were certainly no shortage of contenders to get this review slot, not the least of which was A-Plus from Souls of Mischief, but I chose to feature Huey Newton because his appeared to be the most complete album of the bunch. I was also curious about the apparent contradiction of his name. The more famous Huey P. Newton was a political activist and political prisoner – a firebrand for controversy – while the only fire THIS Newton brands is the one he lights up his weed with. Then again “Over My Head” shows he’s got a little more going on than his love of marijuana.

Well it did come back around to Mary Jane at the end there – but he’s trying.

Huey Newton definitely has a hustle ethic, vowing he’s got to “got to get off my ass – and go get it” on “Million Dollar Dreams,” so he’s certainly not falling victim to the stereotype of a lazy smoker. And though this is an album which largely celebrates cannabis, it’s far from Huey’s only vice, as he also dedicates a rap to “Hennessy” and he’s out there chasing females too on tracks like “She Rolling,” though it’s still celebrating the ability to put a good blunt together. Redman would definitely approve.

Various producers contribute to the “#420EP” – MagicxBeats, Jitta On The Track, Mad Money, Breathe Carolina and so on. The problem is that none of them show me anything extra special. Even tracks with potential like the heavily piano laced “High Life” wind up sounding muddy and low, and when you try to crank the volume the poor mastering causes everything to become distorted. The one super clean track on the whole album is “Relapse,” a new age spacy beat that sound like the type Wiz Khalifa would smoke to, only it has the unintentional effect of making Huey Newton sound like a Khalifa knockoff.

There are certainly passable songs on the “#420EP” even if you’re not smoked out – I wouldn’t be mad at hearing “Looking At Me” or the energetic and futuristic “Mistaken Mistakes” again. On the whole though the “#420EP” feels like it might have been rushed to meet a self-imposed release date, where if the gimmick day had been dropped and a little more time had been spent polishing the 43 minutes of music here, this would have been a higher potentcy strain.