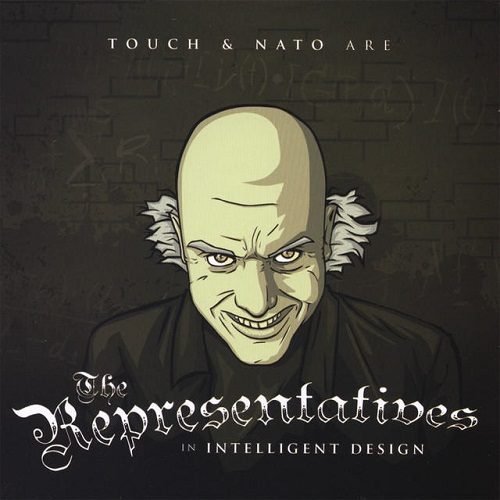 To think, I started with only one album from Edmonton emcees, yet they keep on coming and coming. Obviously, Edmonton artists have been continuing their moment of grandeur as seen through up and coming artists The Representatives comprised of the duo of Touch (emcee) and Nato (producer/DJ).

With lyrical skills spanning back to beginnings of Edmonton’s hip hop scene, Touch began to exercise his talents with the Dangerous Goods Collective back in the early 90s and has grown to become a well respected emcee to represent Canada’s finest. As Touch teams up with Nato’s innovative beats and use of an array of sounds, they initiate a legacy of superior Canadian hip hop with their debut album “Intelligent Design.”

Canadians don’t ever forget their roots especially The Representatives in “Intelligent Design” as the album begins with a dialogue between some onlookers and Touch as he is questioned about why he is still in Edmonton amidst the height of his rap career. Touch’s simple response is, “I was born here. This is where I’m from.” The background music of soft piano keys becomes louder and commences the beginning of “Where I Reside” building on the idea to always show respect to the city you come from. Regardless of the overrated hype of other cities and disapproval from others about possibly making it big elsewhere, Touch stays true to what he knows best. Touch and Nato sustain their representation in “The Representatives” in order to claim fame in the rising city of Edmonton.

It is almost imperative for Canadian rappers to include numerous battle raps in their albums because of the constant difficulties of coming up in the rap game. “Intelligent Design” follows the constant trend with their best tracks featured here. Commencing the track with a piano introduction, “Brand New” encompasses a soulful rhythm with saxophone interludes and cuts while dissecting the imperfections of an adversary as Touch says:

The way you approach the art is all wrong
It’s not about you song
It’s about how long
You can hold down the fort
Consistency, longev’
But what I’m witnessing from your stance alone
You took a chance a bit of flow
The practiced student playing the role
No real mic control
No distinguished blow”

Similar to the prolonged existence of the SP-12 sampler, “It’s the SP-12” compares the respect and longevity of this celebrated piece of equipment to the music of The Representatives. They claim that “it ain’t about the CD, it’s about how well you can hold down a show.” Also, “What I Wanna Say” features a lively sound full of whimsical strings and heavy bass, almost contradictory to Touch’s harsh rhymes as he calls out to all the whack emcees trying test his talents.

“Intelligent Design” gets some added help throughout the album from various featured artists to add a bit of variety of sound and cadence. “Somethin’ Real” features Brooklyn emcee Wordsworth who has rhymed on acclaimed albums such as A Tribe Called Quest’s “The Love Movement” and “Mos Def and Talib Kweli Are Black Star.” Sullen violins and horns permeate this track about the realities of city life in its purest form.

The abstract beat with sounds similar to that of water drops throughout the track featured in “Worda Mouth” includes Chris Plus, Stray, and Chazm. Another abstract attempt in a remix of “What I Wanna Say” is shown in “What I Really Wanna Say” featuring commended Canadian rapper, writer, producer, and mixer, Cadence Weapon. Introducing a more ethereal take on the original song with spontaneous cuts in the track, “What I Really Wanna Say” demonstrates the abilities of The Representatives to provide a multiplicity of sounds all the way through their music.

With the initial sounds of a motorcycle speeding away, “Can’t Hold Me Back” features Chazm and singer Nomad reminding us to never stop trying even when adversity is staring you right in the face. Unfortunately, the off key chorus and monotony throughout the track made me quickly skip to the next.

The Representatives throw in some humorous tracks to break up the seriousness in “Intelligent Design” with for example, “Adult Show” which samples Slick Rick’s “Children’s Story” in an amusing way. As a Maury Povich talk show parody introduces an irate female named Naisha who wants to set the record straight that Touch is her baby’s daddy, Touch begins his story telling techniques of what really went down. If anyone has ever seen a Maury Povich show, you know paternity test results are always revealed in the end and this time Touch was luckyâ€¦he is NOT the father.

The 18 tracks in “Intelligent Design” provide a glimpse into the increased capabilities of our friends in Canada. Not only have The Representatives proven to all of us that in fact, inventive, solid rap does exist outside of America, but they have also shown they are no longer the underdog. Like Canadian rapper Saukrates once said, “America has heard the east, they’ve heard the west, they’ve heard the south â€“ now here comes the motherf—in’ north.”