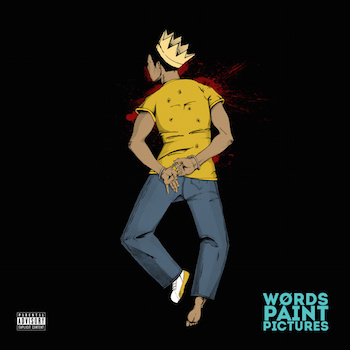 There is a pattern developing in Apollo Brown’s discography, and that’s the minimalist artwork that has featured on albums such as “Dice Game”, “Trophies”, “Ugly Heroes” and last year’s “Blasphemy”. Make of it what you will, but I interpret it as Apollo letting the music express best what the artists are trying to portray rather than another rapper posing in an imposing manner. “Words Paint Pictures”, the new collaboration between Apollo and Rapper Big Pooh goes against this in a way, by not only including the title of the album (at 9 tracks, is it an EP?) but also sticking an image on the front of a black man face down, with bullet-holes in his back and a crown on his head. He’s also been handcuffed, clearly referencing the disgraceful events in America where the police have been shooting suspects first and asking questions later.

There isn’t necessarily a pro-black stance running through Rapper Big Pooh’s rhymes, but he’s always been a rapper proud of his heritage. Much of “Words Paint Pictures” feels passive aggressive, annoyed at the hierarchical system in place in the United States, whilst powerless to do anything to overcome or right these wrongs. To be honest, as a Brit I’ve heard more reports of police brutality towards blacks since there’s been a black president. That’s not to say Obama has been directly responsible for these incidents, but it certainly doesn’t make sense. Ras Kass actually names and blames Obama on “Eyes Wide Open”, for not doing enough to protect his citizens. Big Pooh is less direct, but there’s a clear sense of ‘c’est la vie’ in Big Pooh’s tone, accepting that this is how it works and all he can do in his role as a rap artist is to spread his message.

“Promise Land” is the most potent lyrically, with Big Pooh telling it how it is with lines such as “the revolution will not be on TV, we’re too busy watching fake reality”, while “Augmentation” highlights the difference between certain emcees in Hip-Hop. It’s a convincing argument to add this album to your collection, full of quotable home-truths and a rip-roaring instrumental from Apollo’s endless vault of soulful head-slammers. What could be a jab at Jay-Z in the second verse is more of a fact, with Big Pooh mentioning that no matter how high you get on the Forbes list, you’ll never reach #1:

“Gossip sites is where you go to get your raps from
Forbes magazine the spot and we number 1
But no rapper gonna make it to that top layer
You a nigga now, was before you got here
Spitter hard feelings, this is dope dealing
Enough rope for you to choke yourself, easy killing
Call it hands free, youngin’, ask for me
I’m on the balcony, hands gripping the pump
See how being drunk off the ego will skew the mind, limited view
A theater near you displays every dream until it seems that it’s true”

Big Pooh hasn’t been this potent with his lyrics since the days of Little Brother, and “Candlelight” even sees Apollo Brown providing a beat to rival 9th Wonder’s best. Mello Music Group even drag L’Orange in to the studio to lace a remix of “Augmentation” which lends a darker side to the vocals, inevitably paling in comparison to Apollo’s original. Apollo has so many dope beats in his chamber that he remixes his own track (“Promise Land”) to close the record, and while it’s not quite as satisfying as the original, it’s more than welcome. The main criticism of “Words Paint Pictures” is the short length – 7 songs excluding remixes. More in line with an EP, it nevertheless remains an excellent listen – I’m just pissed that Amazon charged me more for this than the Joey Bada$$ album.

Good music is good music though, and I’m hard pressed not to recommend this, especially as Big Pooh lends some fresh rhymes to a traditionally heavy going area of rap music – politics. When you think of passionate, political rappers it’s always the same rappers that get name-dropped: Immortal Technique, Dead Prez and Public Enemy. You could throw in Talib Kweli if you like, but it’s fair to say that more rappers are speaking out about the injustices they see and hear about, and Rapper Big Pooh has shown that he is one of the few that can get his message across without forcing it down the listener’s throat. I’ll attribute it to Apollo Brown’s production also, because the guy can do no wrong at the moment and has proven time and again that his skills are suited to any type of rapper, political or otherwise.