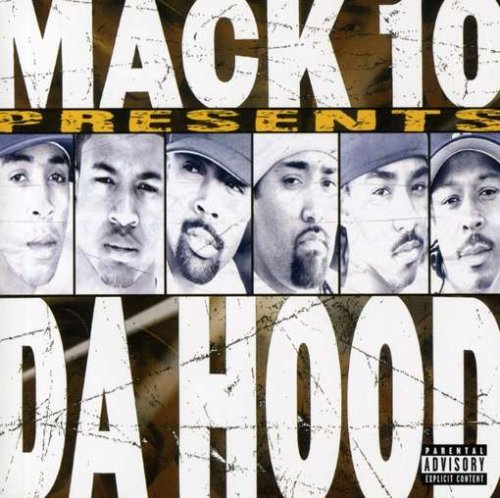 D3 is at it again. We should be hip to this game by now: they use a big name to draw the suckers in, offer a new album at ridiculously low prices to push the units, and then slips the LP in under all of our noses with a range of songs that are either recycled, mediocre, or at best average.

When I picked up a copy of this album for $9.99 after seeing Mack 10’s name on it, I expected something the quality of his Cash Money Records debut “Bang or Ball.” After taking the shrinkwrap off and realizing D3’s sneaky-ass imprint was on the back it was already too late. This is not a Mack 10 album; INSTEAD it’s an album of West coast up-and-comers who formed a group with the trite name “Da Hood.” What’s next, “Da Ghetto Realists” or “Da Gangbangaz?” Please. What’s more surprising is seeing established artists like Mack 10 and Techniec carrying these unknowns for a whole album.

Speaking of Techniec, he’s one of this album’s few true highlights. His solo song “Pay Back” features a pounding beat by R. Coes, but the polished flow and verbal wit of Tech’s rap is what really sells the song. His lyrics on this song prove he’s not only far beyond “Da Hood” that he comes from but that he really belongs on his own album (or at least in a different crew):

“If I spot him in the club, watch the crowd split
So fast, you’ll think fat niggaz was runnin the dash
I put the magnum in the air, said I’m comin for cash
You can’t hide, how long did you think it would last?
[…]
Hell nah, I don’t bang, I just do my thang
So unpredictable, I need to wear a mood rang
I’ve been sent on a mission to find where your crew hang
Infiltrate; take over the world like Pinky and Brain”

At times this album tries at times to throw up unexpected changes, and under better circumstances these would help to create a dope album. When you have a track called “Life as a Gangsta” billed as featuring Cash Money and Timbaland, it creates high expectations; when you listen to it those expectations are quickly washed away. Timbaland beats are normally known for being innovative or at least funky, but this was a throwaway – it may even be a track meant for “Bang or Ball” that didn’t make the cut. “Everyday” by Lil’ Jon has the same problem. The album’s better produced cuts are by Young Trey: the Warren G-esque “Hittin’ Switches” and Techniec’s “What You Gone Do?” featuring Ice Cube among them.

On the whole though, there’s not much here to write home about. Rappers like K-Mac, Skoop and Deviossi (is that SUPPOSED to sound like Ted DiBiase) will not have you turning around, dropping your jaw and going, “Hot damn motherfucker, who the hell was that rapping? He’s off the HEEEZY!” Mack 10 must have some loyalty or affiliation to these rappers, because he tries to save them with a lot of cameos, but Techniec is the only one who needs to graduate from the minor leagues and go primetime. The rest of “Da Hood” is a waste, and so is the ten dollars I spent on this album.