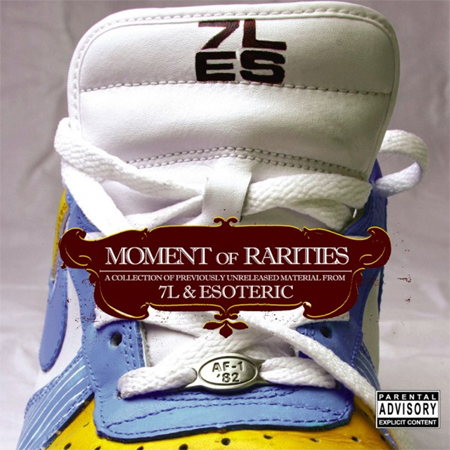 Every rap artist with a deal and distribution knows this story. It starts off in the lab with a pen and a pad, as you listen to your man flip a hot beat in the background. It might be a sample, it might be some live ish off the top of the dome, but whatever it is sparks the creative juices to flow. Pen moves over paper and words come forth. The two agree the end result is hot and go to the studio to record, possibly with posse of homeboys in tow, or may do the track at their own studio if the equipment’s that tight. Everything comes together and the track is master and equalized, revised and finalized, all ready to be put on the next album for their label. Then the feces hits the rotary blade and shit stinks all over the place, and the label pulls the track from the new album. They’ll have any number of excuses – there wasn’t enough room, the sample wasn’t cleared, it doesn’t have crossover potential – whatever whatever. And to be fair sometimes the artists themselves will pull the track. You’re feeling the song when it was first done, but when the record’s ready to come out you’ve got some new shit you like better, so the song hits the wastebin. For whatever reason artists end up with dozens of these songs, or in Tupac Shakur’s case hundreds of them. It’s why “new 2Pac albums” can be released to this day.

While not every track that ends up on the scrapheap is a classic, many people would argue that any album with every Ras Kass song ever shelved would be the greatest rap album of all time. One hears some shit like “Understandable Smooth” and finds it puzzling such a masterpiece could never get released. But history does sometimes have a way of writing the wrongs. Sometimes it’s done the legal way, such as Cormega buying back the rights to his own record so he could release “The Testament” legit. Sometimes it’s done in a bootleg form, such as the many copies of 50 Cent’s “Power of the Dollar” and Young Zee’s “Musical Meltdown.” Rarely though do you find that the artist’s own label will say “Well shit, we missed the boat on these songs – let’s go back and do it right.” And yet with 7L & Esoteric’s “Moment of Rarities,” that’s exactly what Babygrande Records has done. Complete with liner notes inside Esoteric penned himself, this album is a look at a vintage selection of tracks that SHOULD have come out before now, but never did.

Things start out strongly on the aptly titled “Knockout (Victory Lap).” Beyonder provides a pounding beat that jabs with lefts and rights to your aural canals, and he even does his best Michael Buffer style introduction to give Esoteric prizefighter status. As good as this opener is, it’s quickly eclipsed by the follow-up “Boxcutter Rap.” 7L & Es actually scrapped this one themselves because it reused a sample featured in another song, but as Esoteric says in the liner notes “I said fuck it and re-did it a few years ago.” The track is a certified banger musically and lyrically, so you’ll be glad that he did:

“Yo it’s murder in the verse, execution in the chorus
You thug it out? Cut it out, your writing steez is a tease
Tellin G’s that you catchin felonies sellin ki’s
With your celly and your Pelle Pelle sleeve
I don’t believe you run guns and tear the beam
Man PLEASE, you crazy, Fugazi
You be gettin shook like a misbehavin baby”

Hotness just keeps flowing as you move forward through the disc. “Axe Hurlers” was Beyonder and Esoteric just flowing over a beat from their man Prowla for the hell of it, but it led to more Australian/American collaborations later on down the line and it’s not hard to see why. “Psychohistorians” teases Isaac Asimov fans with the title, but is really just KARMA and Esoteric ripping shit to a Beyonder beat. He also produces “Culture of Death” featuring Jus Allah, a track originally intended for an Esoteric solo album that he ultimately put on hold. “Lurkers at the Threshold” flips a Star Wars sample ill, “Face Defeat” was the first song recorded for “Dangerous Connection,” but eventually parts of it got recycled and flipped into “The Way Out.” And so it goes throughout “Moment of Rarities” – there’s a story here behind every track that for one reason or another never got used and only now has a second chance to shine. Among those that shine the brightest “Boston to Chi-Town,” the “Word Association (Remix),” the verbally ambidextrous “Olde English” featuring Slaine and “God’s Angry Men” featuring Akrobatik and Mr. Lif. Esoteric’s favorite though may be the Beyonder produced “Throw ‘Em Up,” which in the notes is puported to be the best joint recorded for the first DC album, and has a boom bap track that would certainly qualify for such status. Why didn’t it make the cut then?

“My style, when I be reppin this
Is like Shallow Hal before the hypnotist
E-S, cats be sayin ‘I hate you’
Cause I spit shit that they can’t relate to
Like havin faggot girls date you
Wanna rape you, taste you, embrace you
Havin dope beat makers wanna mace you
Fans chase you, cats scared to face you
Plus, I stay in the latest gear
This Red Stripe, ain’t Jamaican beer
(Is that Prada?) No doubt, now you can find us
buyin out the bar like we’re payin ghostwriters”

A little on the offensive side? Potentially, but certainly nothing worse than you’d hear on any Necro album. Personally I think they should have kept the song. You’ll find yourself saying those words again and again listening to “Moment of Rarities” – this song is dope, why didn’t they keep it? Well as luck would have it they did keep it, they just didn’t put it out until now. For fans of Esoteric’s fly rhyme style, 7L’s work behind the scenes, and of intelligent underground rap with a witty and acerbic edge to it, “Moment of Rarities” will not remain rare for long. Because the selection of cuts is admittedly somewhat random due to being culled from a career full of missed hits, the only real complaint about the album is that it’s somewhat thematically inconsistent, and not as solid in structure from start to finish as planned, designed and released 7L & Es albums. Other than that though, you can’t go wrong with these mint rares.