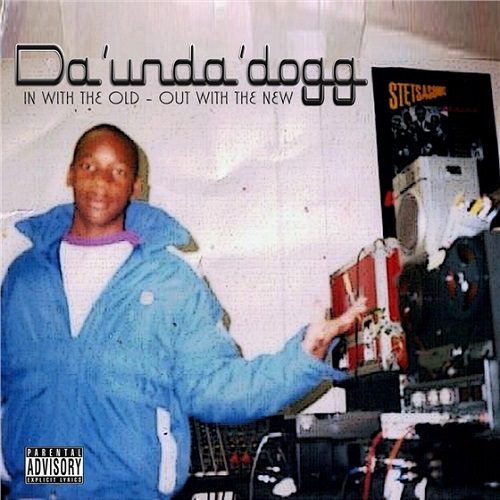 Da’unda’dogg :: In With the Old – Out With the New

Coolio Da’unda’dogg goes back. How far, you ask? Just take a look at the cover of his latest. A grainy photograph shows young Coolio in front of stacks of audio equipment, while in the back to the right hangs a promotional poster on the wall for the first Stetsasonic album, which came out in 1986. Yeah so he’s a child of the ’80s, so what? Well, his first verifiable recorded appearance dates from 1991, alongside the legendary Mac Dre on the single “California Livin’,” a time when exactly four Bay Area rap acts had broken nationally – MC Hammer, Too $hort, Digital Underground and Paris.

Da’unda’dogg (as he officially goes since another rapping Coolio made quite a name for himself) never gained nationwide notoriety. In fact, he feels underappreciated in the Bay as well, one reason he produced a biographical documentary titled ‘Unknown Legend’ (also the title of a 2008 album). For the doubters, he listed the stats right on the cover of another album, the aptly titled “Numbers Never Lie,” in 2013:

These figures are obviously already obsolete, because not only is “In With the Old – Out With the New” not included in the above calculation, there’s yet another Da’unda’dogg album underway, “The Ghost of the Hustlers Past.” So what’s our incentive to step in at this particular point in Coolio’s discography? If you know this RapReviewer, you know the answer – album cover and title. Turning a familiar phrase on its head is always a good way to arouse interest, and in this case I was curious – how old is ‘old’ exactly? If Da’unda’dogg played support for Too $hort in 1988 and released his first tape in 1991, how far does “In With the Old – Out With the New” go back?

Da’unda’dogg makes a discernible effort to take us back on the title track. The preceding album intro sets the stage with opinionated lines like “What they rappin’ ’bout? I don’t got a clue / They shuckin’ and jivin’ – shit I ain’t gotta do.” “In With the Old – Out With the New” then retraces Coolio’s career, from the aspiring teenage rapper to the convicted bank robber – and getting back on track again. Several songs on the album draw from the life experience Troy Deon Reddick has been able to accumulate. “Hard Head” deals with the stubbornness of youth, “Take Flight” finds words of advice and inspiration, “Whole Conversation” is highly instructive for those who have sensitive information to share. “Trust No Bitch,” “My Own Destiny” and “Streets Is Craaazaaay” are less distinctive but still written with intent.

All that is potentially at least mildly interesting if you can get past the music. I doubt that you can, though. For the third time already Coolio connects with DobCee of Pushin Dope Productions out of Santa Fe and entrusts him with the production of an entire album. Production that, in the case of “In With the Old – Out With the New,” touches the basics of the regional sound but in a strictly amateur way. Occasionally they manage to hit the right note, see the old school West Coast charm of the squeeky-funky “Trust No Bitch,” or the ominous, sharp-edged “Aint No Slac’n in My Mac’n” (which inexplicably gets cut off after one verse).

But tracks like the bleepy and rubbery “Invictus” or “Streets Is Craaazaaay,” a virtual cabinet of curiosities of amateur beat interiors from times past, are absolutely abysmal. Where are these guys’ production values? Around the world there are thousands of beatmakeres who are well versed in contemporary rap music, and a rapper with that kind of history in the business (Cavvy Rock Productions/Cavvy R. Records running since 1991) should be able to reach out to a couple of them. If the Bay fails to properly recognize Da’unda’dogg, musically insulting informed and devoted listeners is not the way to sway them. The West Coast’s sonic experimentations in the field of hip-hop have been vital to the genre, but the days when you could randomly mesh synth and bass lines together and put a basic drum track underneath with no musical vision whatsoever and without any regard for sound design are long gone.

The sad thing is that Coolio has something to say. The self-described “street nigga and a rap cat” represents the generation of hip-hop artists who combined skill and street smarts, the generation of UGK, Scarface, C-Bo, E-40, etc. He’s a level-headed dude who is able to drop game and gems (regularly in the form of ornate four-liners). So if you can indeed get past the F-grade music, there’s more than one lesson to be learned (word to RBL) from “In With the Old – Out With the New.” For those familiar with Da’unda’dogg’s history, the album is perhaps better than our rating suggests, but for those more in tune with the new than the old, it’s probably even worse.