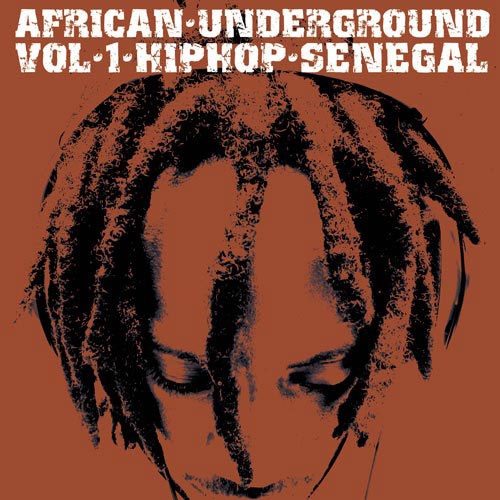 Hip Hop, perhaps now in its early adulthood at approximately 25 years of old, is still a decidedly American art form. While the UK and a few random Eastern European countries have been making some noise, and in the Western Hemisphere a few artists from Caribbean nations and Canada, much of the rest of the world is still just catching on.

A decidedly black art form, it should come as little surprise that a group of Africans from a country such as Senegal are coming forth to show the stateside folks that they too can take a stab at this ever-expanding thing known as Hip Hop.

Obviously, this particular collective of artists are taking the liberty of representing Senegal, and, as the title of the album indicates, do so with a notably underground aesthetic. Being that the majority of the rapping on this LP is performed in Wolof, the native language of Senegal (and, no, I wasn’t aware of that until I read it in the press release), it may fall on deaf ears if those ears are attached to English-speaking heads. Regardless, it’s still an interesting listen. While most of us won’t be able to discern the semantics and idiosyncrasies of Wolof rapping, it still offers much to the active listener.

There’s also a notable reverence for the legendary American underground producers like Pete Rock, DJ Premier, Jay Dee and others; on most of the tracks, the bass kicks kick, the snares snap hard and there’s a generally-soulful feel throughout. Two of the more memorable tracks are both by Shiffai (admittedly because he raps in English), who explores his self-indulgent side on the aptly-titled “Shiffai,” featuring a catchy female vocal on the hook, as well as the ethereal “Never Forget,” a tribute track to a deceased friend and fellow MC.

It would seem there’s only so much one can gather from listening to music with lyrics in a foreign language. But, many enjoy operas which are performed in languages they cannot understandâ€”so how else can this be approached? Perhaps, then, this compilation becomes an interesting case study in cultures. This is, for all intents and purposes, an African take on an American music genre. What these particular artists and producers seem to take from their American counterparts is the edginess and raw feel from which it all sprungâ€”that is, the aforementioned underground aesthetic which is so pervasive throughout. And this too generally translates into the content in many of the songsâ€”much like ours does. That is, this Senegalease underground is one of substance. The liner notes provide a biographical sketch of each artist and the motivation behind each song, and, on interesting to note, an American’s interpretation of these songs would likely say that the “feeling” of a given track usually corresponds with the subject matter (as told by the liner notes). “Begguma (I Detest It),” for example, is a politically-charged expose on police brutality, and fittingly, the beat features brooding bass notes and menacing string stabs. The liner notes even describe the track as akin to N.W.A’s “Fuck Tha Police.”

Whether this compilation is listened to as a Hip Hop album no differently from any other or as the subject of empirical study in a music and culture course by a nerdy academic in some university is ultimately at the discretion of the listener. But a listener of either sentiment probably won’t be able to ignore the other’s possibilities and implications thereof. If you’re even remotely interested in the globalization of Hip Hop (particularly by rappers whose first language is not English)â€”not to mention the subsequent questions and curiosities it’s bound to raiseâ€”this is well worth a listen. Americans are often accused of narrow-mindedness, and, all political banter aside (insert subliminal “Rock the Vote” campaign ad here), this compilation is quite possibly the one where you should think outside the boxâ€”if you don’t already.