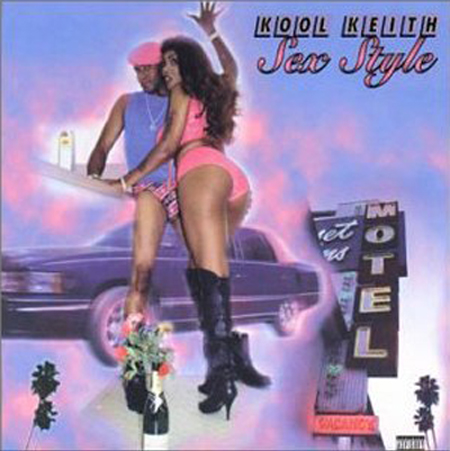 If there is one adjective that could describe this album, it’s “uncomfortable”. It’s like hanging out with a friend who starts to share a little too much about his perversions. It’s like finding yourself at the Clermont in Atlanta watching over-the-hill strippers pay for their songs AND drinks. “Sex Style” marks the area where a healthy enjoyment of sexuality turns into something much darker and potentially damaging. The rumors around this album are that Keith blew all the money Dreamworks had given him to record a follow up to Dr. Octagon on strippers and porn, and “Sex Style” was the result. I don’t know if that is true, but on songs like “Don’t Crush It” and “Sly We Fly” Keith sounds as strung out on sex as Rumors-era Fleetwood Mac were on cocaine.

Whatever his mental state, Keith still manages to deliver the crazy/clever lines that he is famous for, like “shooting jism/she ride like a Geo Prism.” His freakiness and trips to Belvue aside, Keith is a stellar rapper, and has a unique ability to twist language and spit verses that may not always rhyme, but always work. He has amassed a cult following not just because he says a lot of crazy shit, but because he says it in a way that few MCs can match.

A perfect example is on the dis track “Keep It Real… Represent.” On the surface it is your standard homophobic track, in which an MC disses his opponents by accusing them of being gay. However, Keith gives it a freaky twist, by accusing his rivals of not just being gay, but being transsexuals:

“I heard you quit rap, your wife went back to porno flicks
You turned drag queen, a call girl doing tricks
Nighttime prostitute kid, I’ma take your loot
I heard you queer now like Boy George, blowing flutes
With high heels, you stole your mom’s birth control pills
You on some new stuff, I heard about that sex change
You got a vagina, your grandmother think it’s strange
New eyeliner, you was flirting with a gay designer
Your girl felt mines, and pulled off her Calvin Kleins
I saw Tampax, gonorrhea red stop signs
I looked at her and said, “Mmm.. put your panties back on”
then jerked off to Foxy Brown, when her verse was on
I wanna stand back and bust nuts at your butts
Your girl is cocked up, with lollipops, doggie style
I feel I’m dealin with plastic, watch these fake smiles
Yeah, meet my left and my right”

The chorus is a classic Kool Keith one-liner: “Keep it real.. represent what? My nuts!” The whole track is so wrong, so gross, and so vivid that you can’t help but appreciate it.

“Sex Style” was recorded in San Francisco by Dr. Octagon collaborator Dan the Automator, with Kutmaster Kurt handling all production. Kurt manages some dope beats, sampling Star Trek sound effects on “Sly We Fly”, and delivering some bounce on “Make Up Your Mind”. For the most part, the songs have the sparse, boom-bap sound that Kurt is famous for. This works for some of the songs, but by the midpoint, the songs start to sound the same, and there just isn’t enough variety to carry all sixteen tracks. The monotonous production and creepy sexuality make “Sex Style” difficult to listen to in its entirety. If you do make it through the whole thing, you may find yourself needing a shower.

That doesn’t mean that it isn’t a great album. “Sex Style” has its own, perverted charm. He remains one of the more unique voices in hip-hop. One of the things I like about him, and that is really evident in this album, is the fact that he is nobody’s fool. He marches to his own drummer, and if you don’t like it, he doesn’t give a shit. It would have made sense for him to try to appeal to the white hipsters that gobbled up the Dr. Octagon album. Instead, Keith made an album that was too freaky for the hipster audience, too weird for the more mainstream hip-hop audience, and too dirty to get any radio play. “Sex Style” is proof that Kool Keith is both an amazing rapper and a superfreak. Now when are he and R. Kelly going to do a collabo?