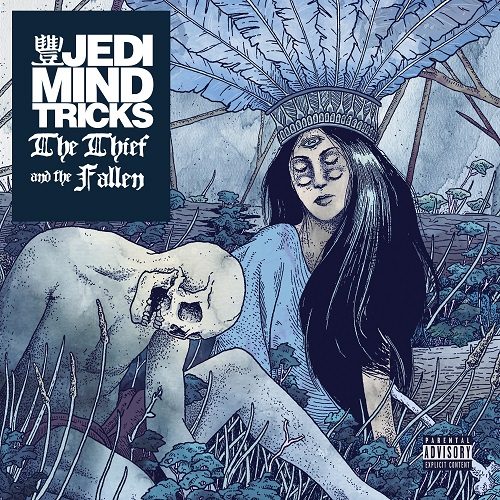 Jedi Mind Tricks :: The Thief and the Fallen

About ten years ago, Jedi Mind Tricks had the underground locked down. Following the success of “Visions of Gandhi” and “Legacy of Blood”, a whole slew of affiliates began filling in gaps in the release schedules for rabid fans of hardcore Hip-Hop with that orchestral, brutal sound we now know all too well. Before Snowgoons, there was Stoupe the Enemy of Mankind. He hasn’t been on a Jedi Mind Tricks release since 2008’s “A History of Violence”, which was where the JMT discography started to tail off.

Considering that Stoupe gave Canibus his sole claim to a great album and ensured his production wasn’t spread too thinly during the 2000s, he remains one of the most respected craftsmen in the underground. What always struck me was how his beats always sound crystal clear and nothing like the gritty stylings of the first two Jedi Mind Tricks albums (“The Psycho-Social, Chemical, Biological & Electro-Magnetic Manipulation of Human Consciousness” and “Violent By Design”). The difference between “Violent By Design” and “Visions of Gandhi” is similar to what RZA did when he dropped “Wu-Tang Forever” in 1997 â€“ he magnified his sound and made it cinematic.

In 2015 Vinnie Paz has reached veteran status and is well-regarded in the underground, sticking to his distinct and oft-copied approach to uber-violence. What surprised me on “The Thief and the Fallen” the most was how Vinnie stepped outside of his comfort zone on some tracks, and generally sounds grateful to have Stoupe back on the boards. If you enjoyed the mariachi vibe of Stoupe’s mid-2000s work, tracks such as “Rival the Eminent” and the ‘buh-buh-buh’ stylings of “Deathless Light” are classic Stoupe.

Vinnie has adapted his style over the years which means he is spitting his rhymes at a quicker rate, and while there’s nothing here as brutally intense as a “Scars of the Crucifix” or “Kublai Khan”, it’s infinitely more interesting than anything on 2011’s “Violence Begets Violence”. Vinnie’s flow now matches Stoupe’s haunting instrumentals in a different manner; the best example is on “Destiny Forged in Blood” whereby his breathless delivery is more reminiscent of his AOTP colleague Esoteric. Rather than bottling up his aggression and launching well-aimed Molotov cocktails at the beat, Vinnie now sounds like he’s calmly taking a flame-thrower to the music. Lyrically, it’s standard Paz, encompassing violent threats and passionate bursts of bile, aimed at inferior emcees. Personally, I miss some of the outlandish mythological references and then there is the lack of JMT member Jus Allah, who has been on and off with Vinnie for a while now. Given that Jus sounds more and more intense as the years go by and lends the crew a horror-core vibe when he does appear, it’s not a major absence although it does break up the constant attacks from Vinnie’s weathered larynx.

There aren’t many guest rappers on the album, which is always a good thing. Dilated Peoples bring some normality to proceedings on the dramatically named “The Kingdom That Worshipped the Dead”. It could probably pass as a Dilated track were it not for the profanity-laden verse from Vinnie, but the same could be said for many tracks with Vinnie featured. His presence is undeniable and whether you love him or hate him, he knows his strengths. Just as he began to sound formulaic and repetitive, he goes and drops a better verse than RA The Rugged Man on “And God Said To Cain”, displaying his own verbal gymnastics.

As far as Jedi Mind Tricks albums go, this is a good one. There’s the feeling that each of their previous albums has fed in to the sound of “The Thief and the Fallen”, lending it a ‘one size fits all’ feel that means there are songs here that you’ll enjoy whether you prefer the modern boom bap of “Violent By Design”, the polished emo hooks of “Servants in Heaven, Kings in Hell” or the stabbing directness of “Legacy of Blood”.