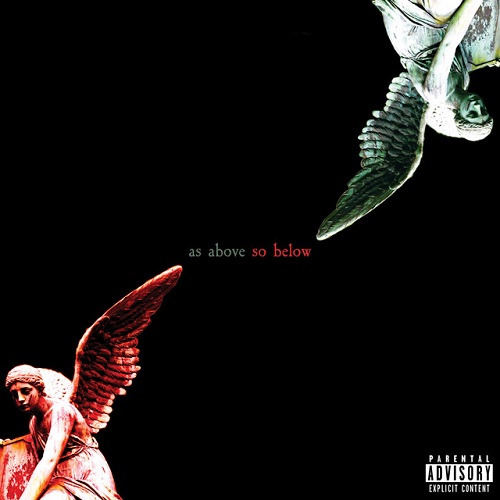 Vinnie Paz :: As Above So Below

Vinnie Paz has been a staple of underground hip hop for over two decades, building an empire under the Jedi Mind Tricks brand. Whilst JMT have crafted greatness, with the cult classic “Violent By Design” and beloved follow-ups “Visions of Gandhi” and “Servants in Heaven, Kings in Hell”, Vinnie’s solo albums have been solid but haven’t quite managed to capture the sheer ferocity of his work with Stoupe the Enemy of Mankind. “As Above So Below” does some interesting things but is largely more of the same, for better and for worse.

Recently, however, his empire has shown signs of faltering. Fans that follow Vinnie on social media will know his love for boxing, and he’s taken a few jabs recently from former Army of the Pharaohs (AOTP) comrades which happened conveniently close to the release of this new album. While there have been inner-circle disagreements between Jus Allah and then Chief Kamachi, the recent shots from King Magnetic and Doap Nixon raised eyebrows in February amongst loyal underground fans. It’s difficult to take sides given all of these names have benefitted from their association with the Jedi Mind Tricks brand, but as of writing this review, Vinnie has remained quiet.

After nine JMT albums and five AOTP records, the solo Vinnie projects allow the Philly emcee to delve into more personal territory, but he often falls back on the confrontational gun talk too often for my liking. Some of his best songs are memorable for their emotional impact – 2010’s “Same Story” shows the thankful side to Vinnie’s fear of losing another father figure (the original Anno Domini version is particularly potent). The mental health issues discussed on 2013’s “Is Happiness Just a Word?” with depression and anxiety, the ominous paranoia of 2010’s “End of Days” and of course, an artistic high-point is 2006’s “Razorblade Salvation” which kickstarted the pairing of Vinnie with a more stringent use of accessible hooks. There was a moment where Vinnie Paz was on the verge of reaching a much wider audience, particularly with the list of features that were on 2011’s “God of the Serengeti”.

So how does “As Above So Below” set itself apart from other Vinnie Paz projects? Well, to the casual listener it’s your predictable, gruff rap that is designed to make you want to punch enemies into orbit. But there are some minor tweaks to the formula – the first two tracks show the influence of Roc Marciano and Daringer’s production but it doesn’t really work. Vinnie’s about as smooth as sandpaper, so it’s no surprise that songs quickly revert to the scathing style we know and love, backed by familiar names like C-Lance and Stu Bangas. “I Am the Chaos” may be the fastest delivered rhymes in Vinnie’s catalog, but its performed in a monotone so his usual, abrasive presence is diminished somewhat.

The rapid-fire rhyming is slicker on “Sicilian Bull”, bolstered by the Heavy Metal King himself on the hook. The 90s rap influences lend “Mock Up on Mu” its satisfying head-nod. Much like “Ninety Ninety Three” and the AOTP projects, Vinnie’s style meshes well when the beat is minimal, yet subtle with its “earworming”. Celph Titled and Buckwild pulled off a great collaboration in 2010 and I would love to hear a Vinnie Paz record following a similar concept.

“The Ghost I Used To Be” paired Vinnie with Eamon to great effect, and they reunite for “Spilled Milk”, a heartfelt reflection on fatherhood and how Vinnie isn’t willing to replicate the mistakes his old man made. The honesty in Paz’s rhymes make this an immediate highlight from the album and will likely receive a video later in the year.

“Ten years old, they telling me that my father dead
What the fuck was going through my father head
He ain’t think his youngest need his father
Had a million chances to change but didn’t bother
It’s like he ain’t love me enough to live
Or do something to make an adjustment for his kids
And you ain’t think you dyin’ gon’ divide us
And you ain’t think a ten-year-old boy needed guidance
Ain’t nobody talking, just bottle it up inside us
And shit could turn ugly when there’s no one there to guide us
It’s all good, I still love you, I forgive you
But that ain’t gon’ be something my son is gon’ live through
He ain’t gonna lose me the way I lost you
‘Cause doing that to him is something I couldn’t do
I had to change the way I was living ’cause I was you
The same hard head and the same world view
I had to do a 180 and get my shit together
When you a mess, pop, it’s hard to get your shit together
But I ain’t living for myself now, it’s all for him
And I’m trying to be everything that you should have been”

I remember seeing Jedi Mind Tricks in London back in 2006, and Vinnie was a big lad. It looks like he’s a man of his word as he’s lost a lot of weight since then, and he’s not alone. Lil Fame, Fat Joe, Styles P – many rappers in their forties are starting to look after their health, which is great for fans but more importantly, great for the families. Overeating and drinking is a form of self-harm and an area of hip hop that is often accepted as par for the course, so it was interesting to hear Vinnie’s approach to the topic and how it has affected him and family members.

There are frequent references to baby food – specifically how Vinnie will turn you into the equivalent gooey mess. But it glosses over the fact the Philly emcee is a father and with each release we are slowly getting a healthier ratio of how Vinnie the man feels, compared to how Vinnie the gun-toting maniac feels. I caught some nods to his Ikon the Verbal Hologram years, particularly the filthy Bronze Nazareth production that is “The Conjuring”. It would have fit snugly into the “Legacy of Blood” or “Visions of Gandhi” records but it’s Vinnie verbals that rolled back the years, as he zoned in on one of his most overlooked skills – outlandish vocabulary. Similar to artists like Ghostface Killah and Roc Marci, Vinnie is at his best when he’s pulling references from the deepest depths of his mind:

“The prime directive is the connection to the Andromedans
I’m washed in the blood of the lamb and all of its vitamins
The sheep stray, that was the fate of David and Solomon
The alba-draconian sacred ages of Ottoman”

Vinnie Paz has his loyal fans who will lap this album up but it’s unlikely to convince listeners who aren’t into Vinnie’s vicious style. Recognize Ali, Estee Nack, and Vast Aire aren’t names I expected to encounter, so it’s clear Vinnie is starting to diversify his guest spots. He’s also experimenting with hooks, whether it is melody, stuttered lines (like on “Cero Miedo”) or the back-and-forth conversation on “Ankle Bracelets”. “As Above So Below” takes its title from the 2014 supernatural horror film and much like a modern horror flick, Vinnie Paz utilizes his well-worn formula but throws in a few new tricks to keep it from feeling as predictable as some of his previous work.

Which for a 23-year veteran is commendable.