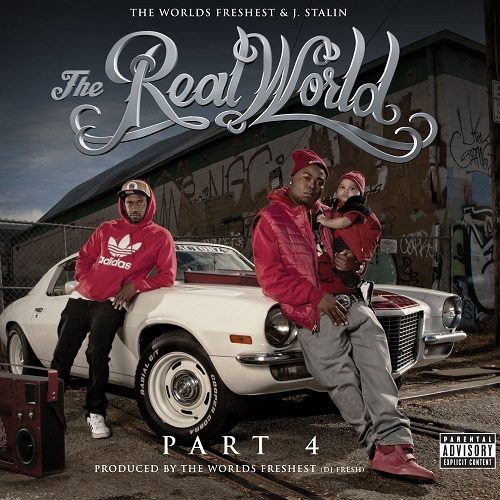 ‘The Worlds Freshest’ DJ Fresh may be famous for his “Tonite Show” series that has seen him play host to musical guests ranging from Mistah F.A.B. to Raekwon to Freddie Gibbs, but “The Real World” is his recurring rendez-vous with Oakland’s J. Stalin. They entered the game practically together and have maintained their working relationship since then, whether on the three previous volumes of “The Real World,” or 2013’s “Miracle & Nightmare on 10th Street.” Like the latter, “The Real World Part 4” sums up to a double disc in the physical format.

Whenever a rapper has such a high rate of production, his material can be divided into categories. One of J. Stalin’s preferred topics is the female species. Curiously enough, all of these songs end up define-the-relationship deliberations as he ponders to what degree he would like to get involved with the woman in question. Fulfilling his carnal desires is often seemingly as far as he is willing to go, but just as often the length and depth of his explanations give away the romantic. Asking her, “You ever fucked on the roof of a skyscraper in the pouring down rain way out in Las Vegas?” is practically a marriage proposal.

It’s probably not, because in the same song he argues that the best way to avoid divorce is to avoid marriage, but it’s clear that Stalin’s love interests aren’t merely passing. “I keep it real with you cause I care,” he sums up his philosophy on “All Night,” a song about how even hustlers long to come home into the loving arms of a significant other after a hard day’s work. Or in rap terms, where bromance is perhaps better understood than romance: “We go together like peanut butter and jelly / If you was a nigga, we’d be Boosie and Webbie.”

Questionable comparisons aside (there’s… more), a number of Stalin’s girl songs are actually pretty good. And while they are never not sexually explicit, they play out like actual intimate moments instead of locker room boasts or drunk come-ons. The boyish, husky voice with its melodic twang works in his favor – as does the music. DJ Fresh typically seeks inspiration in the vaults of ’80s R&B and funk (sometimes more obviously, sometimes less), stirring up breezy vibes that are perfect to accompany trips in the summer months. From opener “Welcome to the Real World,” where Fresh samples from their earliest collabo, to “The Finer Things in Life,” a long overdue jack of one of Def Jam’s earliest ventures into R&B, “Part 4” makes for a highly relaxing listen. At times Stalin and his beats approach the comatose state of contemporary rap, but whenever producer Taylor Supreme is involved, the album really arrives in the modern world, apart from the fact that DJ Fresh again and again lives up to his name by delivering crisp, coolheaded beats that exude timelessness.

If a clear sound and airy arrangements are Fresh’s essentials, J. Stalin’s are an enthusiastic delivery and a vocal friendliness that make him instantly likeable. Occasionally the vocals capsize and suddenly sound nonchalant. At the end of the day, however, all involved give an inspired tuneful performance. The lyrics expectedly drag behind. J. Stalin is not the type of rapper to force his pen, he goes with his feelings and follows rap standards. Which doesn’t mean that he’s a airheaded rapper. When he talks (via Chuck Stanley) about wanting to show us “The Finer Things in Life,” he wants us to look beyond the horizon. Before a reinvigorated Yukmouth closes with a throwback pro-black verse, J. Stalin addresses the younger generation:

“It’s mo’ money to be made than what’s on the corner
You fuck around, be the governor of California
Finish high school, get your diploma
Take your ass to college, nigga, fuck the drama
You fuck around, boy, and be the next Obama
with mo’ followers than the Dalai Lama
Take care of your kids and respect your mama
[…]
Stay down and you get back up on your feet
Understand there’s more than the streets
Everybody ain’t made to sell D
You wanna be like you and not like me
And help me bring back 10th Street
Stop killing our community
All we need is some peace and some unity”

A veteran by now, in 2015 J. Stalin presents himself as a mature artist who speaks from experience, an experience that is often palpable. “The Real World Part 4” is one of those projects that merely lack the critical mass and a little bit of momentum to expand beyond their target audience. All it seems to need is a hit single – either one of their own, or somebody else’s in the same mold – to swing the odds in DJ Fresh & J. Stalin’s favor. That is to say, there’s quite some crossover potential here, but if they don’t tap into it sooner or later, they have both circumstances and their own incapability to blame. But while, as is common for releases of this length, quantity rules over quality, “Part 4” is definitely a plus in either man’s discography.