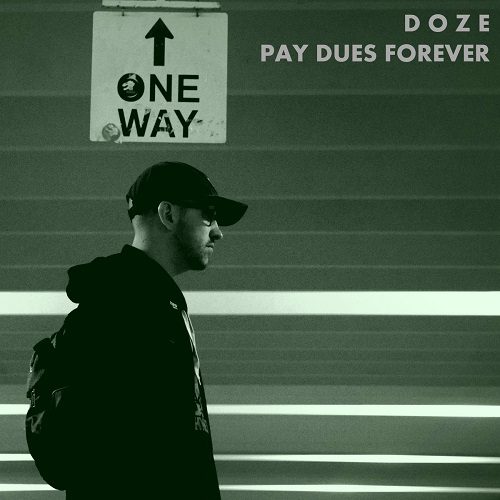 Producer Doze is from South Dakota, a state that has less people than any of the ten most populous cities in the US. It only has San Francisco beat by 50,000 people. You’d never know that he was from the sticks from his music, though. “Pay Dues Forever,” his sixth release in three years, has features from Brooklyn’s C-Rayz Walz, Seattle’s Grayskul, and Ohio’s Blueprint, among others. It’s a solid slab of independent hip-hop.

Doze is a beatmaker in the Blockhead school. He has a solid background in boom-bap, but mixes in other elements, including electronic music, and indie rock. There’s a heavy layer of melancholy to his beats, which matches the more introspective rhymes on this album. It’s a sound keeps the architecture of hip-hop (heavy low ends, solid drums), but isn’t afraid to take it in different directions.

The guest MCs rap about the usual indie hip-hop stuff (struggles of being a musician, sucker MCs, etc.), but also attack bigger topics. “Gravity” is a heartfelt song by Blueprint about the birth of his son, and “Interlude 4” is a monologue about how you need to give up the fiction of self in order to achieve enlightenment. The rappers range from well-known indie rappers to relative unknowns (or at least unknown to me). One potential knock is that there isn’t a drastic difference between the MCs style; I thought it was Doze himself rapping on the album until I was corrected. C-Rayz Walz and Blueprint are the most accomplished MCs here, and so it’s no mistake that their songs are the best on the album. However, there are no duds. All of the MCs deliver.

“Pay Dues Forever” is a good example of why I keep listening to and writing reviews about independent hip-hop. It’s made with a lot of heart and skill, sounds different from most stuff on the radio, and offers a different take on hip-hop from what you usually get. As both a beatmaker and a rapper, Doze is an artist worth keeping an eye on.