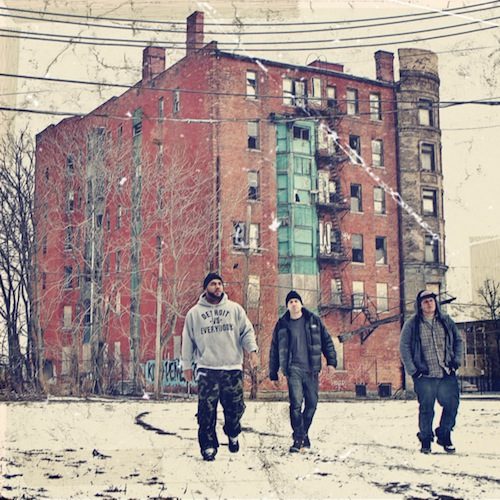 After working with legends like O.C. and Ghostface Killah, Apollo Brown assembled a group of relatively unknown but up-and-coming emcees â€“ Chicago’s Verbal Kent and Detroit’s Red Pill for his latest project â€“ “Ugly Heroes.” Brown recruited these two rappers for a project about “blue collar individuals who make the world go round.” Despite never recording together prior to this project, the two emcees have a strong chemistry on all of the album’s 15 tracks. Red Pill’s smooth but intense delivery is perfectly complemented by Verbal Kent’s gruff voice, and Apollo Brown’s signature mid-tempo samples and hard drum patterns tie the whole sound together. Opener, “Desperate” is not the most traditional start to an album, but it perfectly sets the tone for the whole project:

“Ugly Heroes” is driven by a blue collar theme and the two emcees rap about their first-hand experiences with poverty. “Graves” is a nod to the proletarian worker, who struggles to feed his or her family, and “Long Drive Home” has both rappers reflecting on their struggles during a drive home. “Impaired Judgment” focuses on using drugs and alcohol as a form of escapism, over one of Brown’s best beats on the record.

While most of “Ugly Heroes” is relatively dark â€“ both in production and subject matter, there are still some lighter moments. Most notably, the closer “Push” is an motivating track where the two struggling emcees “push through” their setbacks. Tracks like “Good Things Die” and “This is Life” are less intense than most of the album, and give the rappers a chance to flex their lyrical skills. Kent thrives on these tracks, and offers his strongest verse on “Good Things Die.”

Apollo Brown has been one of hip hop’s most consistent producers over the past few years. While “Ugly Heroes” continues his hot streak of great albums with plenty of excellent beats, it would be a fair criticism to say he does not bring much variety to his production. While I felt his alternate version of “Twelve Reasons to Die” featured some different styles and sounds, “Ugly Heroes” does not seem to stray too far from the type of production he used on projects like “Clouds” and “Trophies.” So while many will check out this project because it has Brown’s name attached, I’d say the true stars of this record are the two emcees, both of whom approach every verse with a “make or break” intensity.

“Ugly Heroes” is not only another tally in Apollo Brown’s win category, but is a coming out party for two excellent young rappers. Brown did an excellent job of assembling two emcees that have very different styles and molding them together to create a concise and focus project. Verbal Kent is a fierce spitter who was able to able to touch on some personal topics to prove that he can be more than a battle emcee. And Red Pill stole the show on most of the album, as there are few rappers out now who can pull off the “working man’s rapper” as he can.