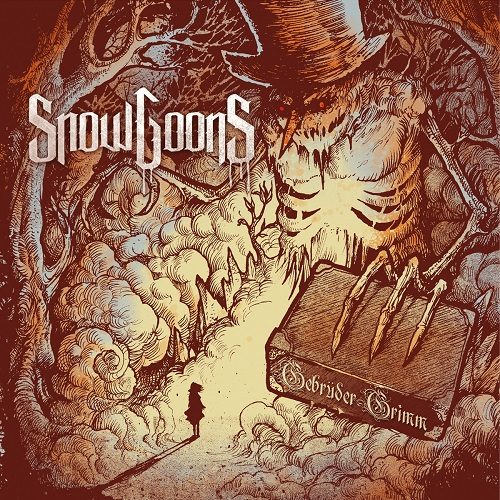 Best known for their collection of folk and fairy tales and fables, the Brothers Grimm were more than conservators of oral tradition. In the 19th century, they were among the very first to study the German language scientifically, which makes them historically important folklorists and linguists at the same time. Still their name is most likely to be associated with famous tales like Snow White, Hansel and Gretel, Rapunzel or Rumpelstiltskin. Characters from European folk tales have an enduring presence in Western popular culture, from Disney’s now classic adaptations to the free interpretations by more recent animation and fantasy movies. Even the Brothers Grimm themselves were reimagined for a 2005 movie of the same name, an action-packed fantasy adventure about how the Grimms came to collect fairy tales.

Perhaps it is also the phonetic proximity to the word ‘grim’ that gives the Grimm brand in English an additional scary touch (‘Grimm’ also means wrath in German). Enter the Snowgoons, a hip-hop production team conceived in Germany but operating practically worldwide these days. “Gebrüder Grimm” (‘Gebrüder’ being an archaic form of ‘brothers’) sees them revisit a previous concept of theirs as they arrange collaborations between German and American rappers. Promising to be a new and improved “German Snow” (the 2009 album that was based on the same idea but with existing beats and verses), “Gebrüder Grimm” is yet another merry-go-round of MC’s that populate the Snowgoons universe. And as usual a few surprise performances liven up the ceremony.

B-Tight is a pretty big name in German rap, longtime companion of superstar Sido and key figure in former powerhouse Aggro Berlin. He shares the beat with Snowgoons rapper/producer Sicknature on the opening “Alles auf Null” (‘Everything Back to Zero’), and it’s quite unusual to hear him in a distinctly hardcore, dark and uptempo setting. Unfortunately the track is only two verses long, and when B-Tight returns for “Usual Suspects,” one wonders in what world him, Canadian upstart Aspects and G-Unit southerner Young Buck would ever get rounded up as usual suspects. It’s one of those moments when the logic of these Snowgoons records gets a bit surreal.

Thankfully other songs make more sense. On “German Snow” the collaboration was virtual, now Ill Bill and Morlockk Dilemma team up for real on “Van Gogh,” which could easily be a Necro track with its psychedelic sample. A Reef the Lost Cauze self-sample likely prompted the appearance of Liquid, whose thick Bavarian accent makes “Murder Beats” a sonic standout. Sylabil Spill is one of Germany’s vocally unruliest rappers (which is quite a feat), a mad rhyme scientist for whom the ‘Goons have found a solid counterpart in Bostonian Reks. The sparse, bumpy production for “Entschulding” (‘Pardon’) leaves enough room for their intense flows and features a single but well exploited source for scratches (Royce’s “Boom”). “Seppuku,” the track with the longest line-up, steadily alternates between English and German (with bits of Spanish thrown in by Big Digga) and features the late Sean Price. “Jesus Gun” brings together two duos of sardonic, provocative antisocial rappers. When Celph Titled and Apathy meet Antihelden (accompanied by a classic collage of cuts), they’re sure to tear a few new assholes.

“Antiheld” (‘Antihero’) is also the title of the track from the trio of DCVDNS, Favorite and Basstard, all three controversial figures in their own right, here naturally hailing the idea of the antihero with stinging sarcasm. Despite making for a strong start (also musically) with the previous “Alles auf Null” and the following “Hate” (totally owned by Olli Banjo), unfortunately segments like the German-only “Antiheld” may lessen the appeal of “Gebrüder Grimm” towards the Snowgoons’ international audience. The same goes for the rocker “Pakt mit dem Belzebub” (‘Deal With the Devil’) or “Fernsehshow” (‘TV Show’), another tune featuring the rapping berserk with the mysterious ‘Time Machine’ reference in his name, Morlockk Dilemma. In other cases you’re not missing much if you don’t understand German. “Magic” by Witten Untouchable is the epitome of formulaic local underground rap – despite the presence of lauded veteran Lakmann. Marph’s “VerrÃ¼ckt in die Zukunft” (‘Crazy to the Future’, phonetically a play on ‘Back to the Future’) is all the more relevant because it tackles the October 21st 2015 commemoration from a socio-political angle.

But there are also instances where bilingualism doesn’t set off synergies. “Gesichter des Todes” (‘Faces of Death’) featuring Pal One and Sicknature is shop-soiled from the flows to the beat. The presence of UK-born KC Da Rookee distracts from Harris’ storytelling effort “HÃ¤nsel & Gretel 2.0,” a modern urban take on the sibling legend set in the drug scene.

There’d be more to report, from some of these Germans representing a caliber of rapper not regularly found in the American veterans the Snowgoons are known to recruit, to the crew’s assembly line production style that ruins too many promising tracks, but the one cut that ultimately elevates this album to remarkable status is RA the Rugged Man’s performance on “Siegelsbach,” a hip-hop moment par excellence. Referencing the Baden-Wuerttemberg village his mother was born in, “Siegelsbach”, consisting to 90% or more of German, is an homage to RA’s partial German heritage, in a broader context evidence for how far rap music really has come. The continued creativity and credibility of the Snowgoons are further proof, even though their projects don’t uniformly live up to the potential that exists when the international underground rap elite meets up.