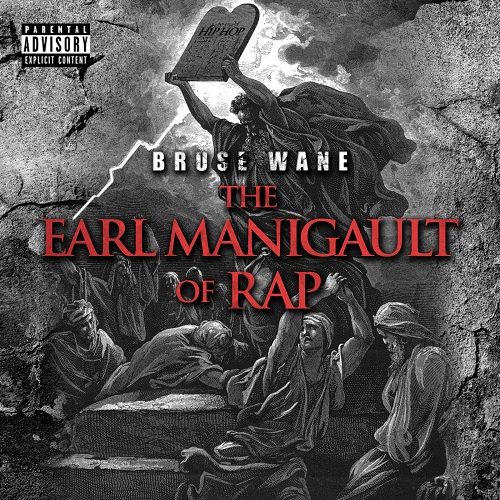 It probably helps to understand where Bruse Wane is coming from if we take a closer look at Earl ‘The Goat’ Manigault, and not the similarly named Dark Knight detective he ALSO derives inspiration from – all the way down to naming his imprint and business operations after the same company that a fictional billionaire playboy always controls a majority share of. All of that is dope BTW particularly if he can get away with it without DC lodging a complaint over IP infringement. No we have to look at ‘The Goat’ instead because Wane chose that reference for his album, and given the recent passing of his friend and mentor Sean Price it’s a very telling title.

For those who never heard the legend or saw the HBO movie about his life starring Don Cheadle, Earl Manigault is considered to be one of the greatest basketball players to NEVER spend a day in the pros. He did try out for the Utah Stars of the American Basketball Association at one point, but never made the cut. You might initially think a b-ball player who wasn’t good enough for the big leagues wouldn’t be a legend, but Manigault’s strength was STREET ball, a court on which Manigault was nearly unmatched. His ability to perform tricks like the “double dunk” was the stuff of legend, and if you went to any place where the street kings ran game in Harlem in the 1970’s, he was either there running things or spoken about in reverent terms by the ballers currently on the court.

Unfortunately Manigault’s story is a somewhat tragic one, and not just because he never got to showcase his talents in the pros, but because he had a troubled childhood in school and a heroin habit outside of it. He went from a man who averaged a record high 57 points a game in his youth to a man trying to GET high any way he could, and between his street ball days he ended up doing several jail bids for drug posession and armed robbery. You don’t find Manigault described as a particularly malicious felon in most places – he was just a man who needed a fix and could never quite break the demon grip that addiction held on him. He wound up working odd jobs to pay the bills between exhibiitions of his basketball skills, where he could hustle people on bets doing tricks deemed otherwise impossible. He became frail in his later life and passed away of heart failure back in 1998 – still a legend in his own time but far too young at only 53 years old.

No one yet knows what felled rapper Sean P in his sleep on August 8th, but he too was a legend in New York City, a “rapper’s rapper” with a humerous and unrepentant attitude and an unorthodox flow that’s literally impossible to copy. As someone who followed his career from the 1990’s on though I can say this much – Ruck/Sean’s flow changed over the years, in much the same way Zev Love X changed as he became MF DOOM. He was still a beast on the mic, but Dumile was (and still is) unapologetic about his love of brews, and even if you adore his comic book inspired metal faced villain persona you can’t listen to early K.M.D. records and modern DOOM raps and not notice the stark difference. The same goes for early Ruck and later Sean Price before his passing. You can draw your own conclusions on that one.

Before his untimely demise Sean recorded a rap song with Bruse Wane entitled “Beast Inside” which seems to be the key selling point for this short “The Earl Manigault of Rap” album. It’s certainly a worthy track to bring Wane’s name to the spotlight, though it may be chilling to hear and see Price’s cameo on the track given he’s no longer around to celebrate Wane making his name on the rap scene.

It’s not the only cameo Price makes on his protege’s project, and quite frankly I actually prefer the old school soul breaks making up the backdrop to “Venom,” which (another chilling factoid) also has some bars from the late Big Pun’s song Chris Rivers. This song is openly being billed as “the last verse Price recorded” and it’s typical Sean P bravado, with machismo fueled lines like “Today’s mathematics/magically slap fa–ots/up to speed/gunbutt your seed.” Wane holds his own in such competitive company though, noting he can “Separate your soul from your body” with his bars while “nincompoops thinkin’ they can box with God/(I) sever your arms, laugh, feed ’em to the dogs.”

I enjoy Wane’s work on “The Earl Manigault of Rap” and can see why Sean Price felt he was worthy to work with, but I can also in fairness say that he’s walking on the borderline between being good and great. Songs like “Gah Damnit” seem to be trying TOO hard, leaving Wane’s flow a little stilted, making his vocal similarities to a few East coast rappers more prominent. I think if you put AZ, Shabaam Sahdeeq and Sean Price in a blender and hit puree, you’d come out sounding like Bruse Wane – with a pinch of B-Real’s nasally delivery thrown in at the end.

On relaxed beats like “The Gifted” he makes it work, although occasionally his punchlines seem to need more punch. “I’m in the spot, she on me like a Prada sale/Talkin’ my spendin’, I’m on Twitter trendin’/The night’s young and she’s lookin’ like a happy ending.” That’s… aight? It’s not horrible I suppose, but it’s not as memorable as Sean P’s flows, even his more vitriolic/homophobic ones. It just feels like Wane needs a dose of personality to be complete. If Sean Price was mentoring Bruse Wane, it seems like he wasn’t quite done yet, and the future rap star is going to have to figure out how to get there on his own now.