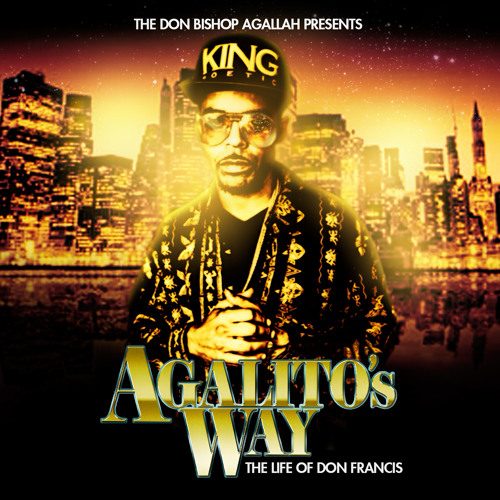 Before they became MP3 streams on DatPiff, Agallah was a regular feature on many a New York mixtape. I’ll always associate his name with Grand Theft Auto III, thanks to the classic collaboration with the late, great Sean Price (on “Risin’ To The Top”), and it was that direct yet cheeky style of hardcore Hip-Hop that keeps fans coming back to Agallitly (R.I.P. to Sean Prittly!). Agallah has often twisted his name in to all sorts of aliases, and this year it’s the film Carlito’s Way that has taken Agallah’s fancy.

Hip-Hop has drawn inspiration from countless Al Pacino movies in the past, namely The Godfather and Scarface, but Carlito’s Way is one that has become more frequent in recent years. “Agalito’s Way” isn’t story-driven in the slightest, and while the premise of an old con returning to his criminal ways may be something to draw comparisons to for an ageing rapper doing gritty, street music, it’s more a statement than anything.

Agallah is a hugely underrated producer but his tendency to try a variety of styles all on one project always lends his projects a real mixed quality. Perhaps that’s why his material is most effective in short, sharp bursts. Proving his rhymes are more than generic street sh*t, he tussles with some of Hip-Hop’s finest lyricists in Chino XL, Ras Kass and Big Daddy Kane. A Kane verse is a rarity these days but it never feels like they are dialled in – it’s always something worth waiting for. “Get Your Sh*t Together” is disappointing then, as the Kane verse is a brief thirty seconds long:

It’s evident from “Three The Hard Way” that Agallah and Sean Price have a special chemistry and Agallah even mentions that he has known Sean since 1985. It would have been great to hear the two on a collaborative LP.

“Agalito’s Way” is inferior to Agallah’s previous work, namely “You Already Know” and that’s down to the largely underwhelming backdrops. Ignoring the abomination that is “Clementine”, an annoying singalong moment that probably sounded fun in the studio but has no replay value for the average listener, “Agalito’s Way” is a good, hard listen that could have simply done with some better production.