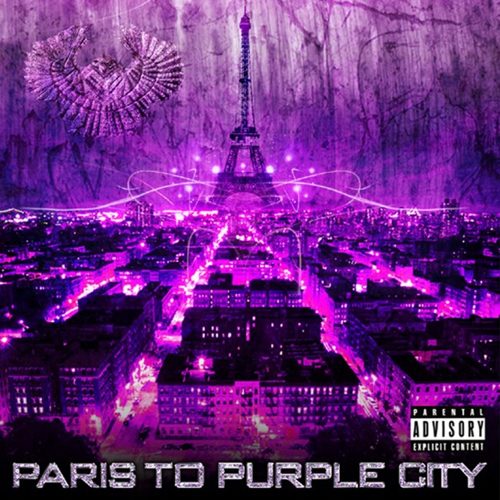 I’m a big Purple City fan. Matter of fact I’m usually a fan of anything Dip Set. With that said, I take Dip Set, and Purple City especially, for what it is: raw, and at times, banal gangsta rap over usually dope beats. While I’ve gotten criticized as a reviewer for giving these guys too much credit, it seems this time around I underestimated Sheist Bub and his fellow piff peddlers. I assume most people, haters and fans alike, thought “Paris to Purple City” was just another grandiose brag about how big Purple City is and how they are “international.” I thought the same upon hearing about this release, figuring Paris was chosen to give the boast the added flair of alliteration. Proving everyone wrong, Shiest Bub’s latest project actually transcends the boundaries placed upon him by fans and the industry by dropping a highly innovative and ambitious project. “Paris to Purple City” is actually a compilation consisting of Dip Set rappers collaborating with “8 of France’s hottest up and coming emcees.”

As with any Purple City project, the production on this CD is dope through and through thanks to Agallah “The Don Bishop.” Agallah’s production centers on flipping samples to craft his own sound. “Paris to Purple City” boasts a triumphant feel as Agallah’s horns blast in a melodic, but forceful, way. “The French Connection” takes on a sinister tone as Agallah highlights a creeping bass line, similar to the one on the hit “Purple City/ Byrd Gang.” “No War” is one of the album’s weaker efforts production-wise as the track sounds like a slow version of G-Funk. Agallah redeems himself on “Money Rules The World” as he flips a high-pitched guitar sample to create a soulful sound. “Da Street” returns to the sinister sound Agallah can craft very well. This time around the track sounds like a dark war march, a feeling accented by the soulful singing in the background. “Hip-Hop” is meant to give an old-school/classic hip-hop feel, but Agallah’s loop is too repetitive and not catchy enough to strike gold. “Rap Is All Around The World” is a thugged out version of Common’s “I Used to Love H.E.R.,” and while the rap is underwhelming at times, Agallah’s sweet and soulful beat is the prefect back drop for such a track. On “New York” Agallah provides the beat with a decent swing/bounce while the soulful string and voice samples play well into the theme. “Baby Girl” is a lady’s track, and while Agallah’s R&B inspired beat has nothing wrong, the track pales in comparison to the energy on Jim Jones’ own “Baby Girl” and “Honey Dip.” The album ends strongly with Agallah providing plenty of energy and some unique synth sounds on “It’s Been A Long Way.”

Agallah is the main reason I peep Purple City projects, and that is the case more so on this album. I’m not saying the rap is wack as some of the Purple City emcees do come through with decent verses. The first verse on “Rap Is All Around The World” is proof that the rapping on this album isn’t a lost cause:

Other rappers drop decent verses, but about half, if not more, of the album’s verses are handled by French emcees. While I can definitely tell most of these dudes have decent if not dope flows, outside of that I can’t tell how good their verses are lyrically. For better or worse, the emcees seem to be mimicking the Purple City style on many tracks â€“ implying that these rappers could be France’s version of thug rappers. Making that assumption would be unfair though as these rappers could also be highly skilled. Either way, the presence of the French rappers does not detract from the album at all outside of not being able to understand their verses.

“Paris To Purple City” is a dope project from some of the game’s most underestimated and often-hated rappers. The beats are fire, making it worthy of peep for that. This compilation will surely be a hit in France as Hip-Hop’s worldwide reach is sure to make this an in demand project for French speakers. Canada will surely gobble up this project by the truckload too. While the inclusion of French rappers may alienate some fans who don’t know French, the ambition and innovation of the project should be commended regardless. Inadvertently, Shiest Bub and Jim Jones included plenty of reasons for even the biggest Dip Set hater to peep the project. In an attempt to add authenticity to the project Jones and Bub constantly rattle off various French phrases in their most thugged out tones. Even as a fan I had to laugh at the countless times the phrase “Oui, Oui Nigga” (pronounced wee, wee) was said. So there you have it, an ambitious project that should appeal to different nations, has an open-minded and inclusive approach, and even gives haters something to laugh at â€“ what’s not to like?