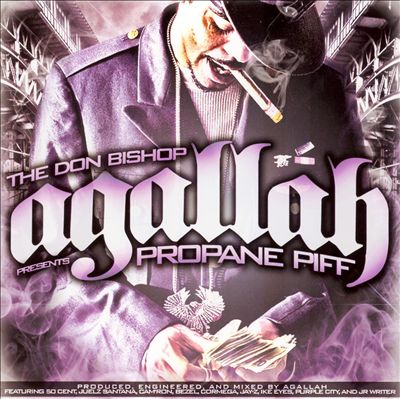 The mixtape is DipSet/Purple City’s weapon of choice (usually $6.99 at mixunit.com), and never has a weapon been so perfectly suited for its army. Agallah, the production wizard behind Purple City, has a dangerous stranglehold on the mixtape biz: he’s capable of reaching out to all of the DipSet/Purple City camp for verses, he makes solid beats and has a seemingly inexhaustible arsenal, plus he’s got a good sense of humor about how to remake other people’s joints for that mixtape-only type of silliness.

Yes, the piff is purple and that’s all he puffs, so he’s gonna make a song (I mean career) about it. He’s in love with his nina, so he’s going to sing a song to his gun. Bang bang. He’s going to kick your ass. He’s hardcore. Agallah is not bringing new topics to the table, but he’s capable of rhyming unusual words together, like he’d be boring to himself if he didn’t. It’s entertaining if you like that sort of thing.

Agallah brings the heat on the guests this time, reaching out to Cormega and 50 Cent. He advertises Mary J. Blige and Jay-Z, but those are just samples (you trying to fool me, Agallah?) mixed in with his production. “Thanks To Me” features Killa Cam to great effect, and followed by the crazy but funny “Piffawanna” it becomes clear that if he wanted to Agallah could someday drop a great album.

As the mixtape goes on, the tracks just keep coming. At thirty songs, truthfully only a few need to be dropped. Only about eight beats shouldn’t have made the cut, but for a mixtapeâ€¦eh, whateva. Mostly, the beats are strong and the lyrics are cleverer than they need to be. Maybe the expectation I have of most mixtapes is making this one stand out, but I don’t think so.

I think Agallah is a major force and is going to make himself rich off his beat-making alone; it’s just gravy that he enjoys writing with a little quirk in his work. It’s gravy that he likes to push slang and slang game. You know, he’s gotta get that guac-ah, get that cake-ah, but he’s not dumbing down for dollars or pandering to an overground audience. He’s just high off that piff, rolling around “in a two-seater/ with some new divas/ and some new sneakers/ with so many furs niggas call me Zookeeper.”