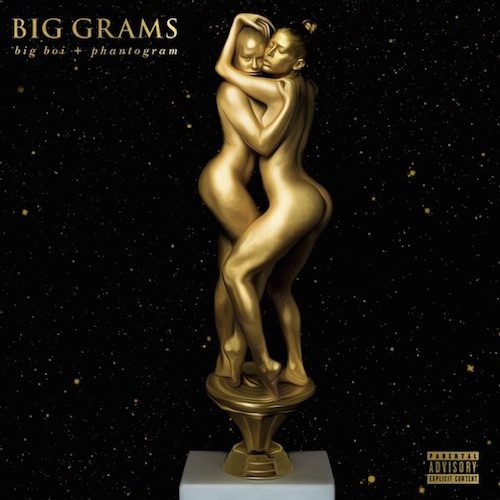 I saw Phantogram in concert five years ago when they were touring for their first album. Singer/keyboardist Sarah Barthel oozed a sleek sexiness, while guitarist Josh Carter was dressed like a schlub and frantically juggled his guitar and a drum machine. Their gothic synth pop was not really my thing, but I loved their beats. Underneath the synths and reverbed guitars were booming hip-hop drums. I wasn’t surprised when a few years later they appeared on Big Boi’s 2013 “Vicious Lies and Dangerous Rumors.” It made sense that the duo would collaborate; Big Boi is interested in taking rap outside of its comfort zone, and Phantogram obviously love hip-hop. Now they have formally collaborated as Big Grams.

Let me get something out there right now: I’m not a huge fan of Big Boi, or Southern rap in general. There is a crudeness and casual misogyny to much of Southern rap that I have a hard time with. No one can swear like a Southern rapper, and no one can get as gross as a Southern rapper when he’s rapping about sex. And let me tell you, “Big Grams” is full of raps about sex. Case in point, Big Boi’s verse on “Born to Shine”:

“Make them call me B.B. King because I give that bitch the blues
Now she down on bended knee because she wanna lick the jewels
And I’m slick, bout to run up in her smooth with this dick
Take a couple polaroids to capture the moment
Now she’s caught up in the rapture of this macking, where your ho went?
In the back of the Cadillac, she gagging, ass and titties showing
As a matter I’m bout to splash her with this Billy Ocean
And watch her rub it on her face, call it Johnson’s baby lotion”

Not that Big Boi is terrible, or always rapping about sex. He’s a fierce, confident rapper who makes it look deceptively easy. It’s nice that Phantogram paired up with a certified legit rapper for their official foray into hip-hop.

Ironically, the strongest song on the album also happens to be the one that features Big Boi the least. “Lights On” is a pretty song featuring Barthel’s whispy singing about coming home drunk late at night. “When the bars say stop/When the bars all start to close/And it gets dark outside/And I can’t find my way home/I hope you’ll keep your lights on for me,” she sings. It maintains the heavy drums of hip-hop, but seamlessly melds them with elements of Phantogram’s sound. It’s a great song, and one that makes the EP worth checking out.

Run the Jewels also appear on this EP (on the aforementioned “Born to Shiner”), which is fitting because Big Grams have a lot in common with RTJ. They are both duos of Southern rappers with East Coast musicians, and they both combine hip-hop, indie, and EDM elements. “Born to Shiner” is the second strongest song on the album, mixing gutpunch drums and clattering hi-hats with languid guitars and synths.

At it’s best, “Big Grams” does a nice job of mixing up both Southern rap and indie pop. It isn’t a flawless EP, but it works more often than it doesn’t and is proof that there isn’t that much difference between genres as we sometimes pretend there is.