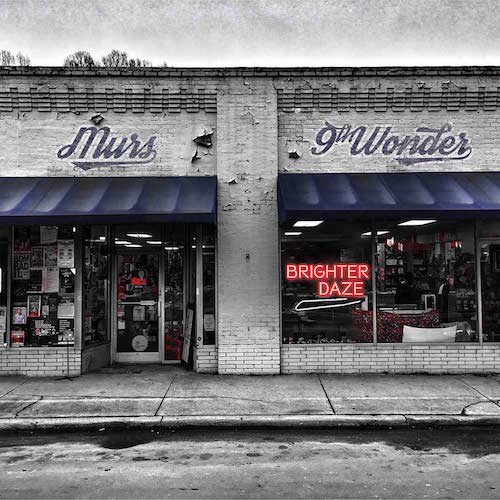 Six months ago when I reviewed Murs’ solo album “Have a Nice Life,” I lamented that he would no longer be releasing any more collaborative efforts with North Carolina super-producer, 9th Wonder. When they released 2012’s “The Final Adventure”, the album began with “Get Together” and ended with “It’s Over”. With the start and the ending tied together thematically, I believed that this was truly the end of their streak. And in the three years since that album’s release, it became more apparent to me that Murs’ and 9th’s break-up was sincerely a self-fulfilling prophecy.

Those lamentations and acceptance of things were allayed when I came across an advertisement for “Brighter Daze”. Released for online download on New Year’s Eve, it certainly qualifies as a late, though wholly welcome surprise. With their sixth joint-album, they’ve proven that the train is still in motion and hasn’t yet lost any steam.

Lyrically, I think Murs is at his best with 9th Wonder. “Have a Nice Life” was a good change in pace, but he seems to have more fun with hip-hop over the Raleigh native’s beats. Whether reciting battle lyrics or spinning a narrative, it sounds much more alive over 9th’s soulful backdrops. On “How to Rob With Rob”, he tells a tale in one verse about his teenage years in Los Angeles when he was a reluctant accomplice to a criminal friend. 9th’s production on this track is merely a looped sample with no drum programming layered over it. Though it would’ve worked better with snares, it was the story that attracted the majority of my attention. “Lover Murs” has an R&B sex vibe to it which flows appropriately into “Get Naked”. With atmospheric, well-placed samples and Problem giving ad-libs for the final verse, it succeeds as a track for the ladies.

“The Shutters” sounds more like classic 9th production. It contains dark, looped piano samples and a haunting voice with his familiar drum patterns. Following the hallmarks of that production style is “Wait…Back It Up”. A song about temptation from the opposite sex, the production has bouncy drums and a care-free flute sample. “If This Should End” contains three verses about the transitory nature of relationships. The hook repeats the line “If this should end, I hope that we can be friends” which reminded me of that Todd Rundgren top 100 hit “Can We Still Be Friends”. The album’s not without guest features.

On their last album, 9th’s protege Rapsody secured the album’s sole guest spot. This time around, Murs invited more artists. The aforementioned Rapsody is included, along with Propaganda, on the track “Walk Like a God”. Some fans, including myself, saw the title and what we thought of was the urban violence summertime story from “Walk Like a Man” on Murs’ and 9th’s first collaborative album, 2004’s “Murs 3:16: The 9th Edition”. The former track is similar in title only. It’s a spiritual meditation on the faith of the three emcees on the track. Rapsody had the best verse on this track:

Murs preoccupation with the aspects of relationships is all over the album, as is him being a purely West Coast emcee. Take those two facts and what do you get? “Otha Fish”. Yes, Murs did a cover of the 1992 song of the same name originally performed by the Pharcyde. I like 9th’s take on the beat, as the original felt laid back and thus a little slower. Before the album’s closer, Murs enlists Choo Jackson, Mac Miller, Da Franchise, and Vinny Radio for the tongue-in-cheek titled “No Shots”. As a posse cut, it looks good on paper. Mac Miller sings the hook (and has a verse), each emcee sounds right, but the beat is just too chill for a posse cut. When I think of such a track, I think of aggressive beats and each rapper emceeing like they’re going for broke. On “No Shots”, there’s no such luck. Luckily, the album’s closer, “Murs SuperStar” sports harder lyrics and a harder beat that makes up for the previous track.

I’m glad that Murs and 9th dropped this album. When they work together and I listen to their music, I think of exactly what you *don’t* see in music videos: Ordinary people doing extraordinary things. Hip-hop may seem dark and foreboding to those accustomed to the same regurgitated drivel, but “Brighter Daze” is a good step in shining a light upon it in 2016.