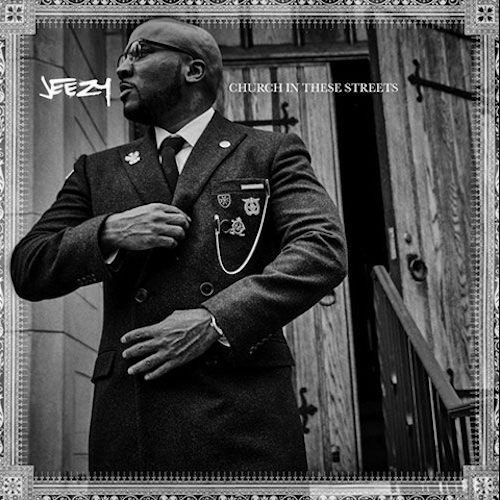 Jeezy :: Church in These Streets

My feelings about Jeezy are about as complex as they come for an artist who is eight studio albums deep, signed to a major label (Def Jam) and who I’ve reviewed multiple times over the years. You’d think I’d have TAFKA Young Jeezy figured out by now, but the very thing that keeps him endlessly fascinating is that I just can’t put my finger on my feelings about him.

Here’s the crux of the problem – Jeezy’s got the “it factor” that so many rappers, entertainers, athletes and actors crave but never seem to achieve. There’s absolutely no denying when you listen to him whether on a record or for an interview that Jeezy (real name Jay Wayne Jenkins) has the charisma and personality of a hip-hop superstar. He’s got the swagger, the charisma, and he acts like he’s carrying Atlanta on his back all on his own. Of course that’s not any more true than when Biggie appeared to be carrying Brooklyn, but if you have the sheer force of presence to make people think a rap scene couldn’t exist without you, then you’d better be making a ton of money from it.

There’s no doubt Jeezy’s Atlanta drawl stands out even on a crowded remix with ten other stars, and when it comes to making hit songs that stand out in a crowded field of hip-hop celebrities, Jeezy seems to have two or three bangers with every single album. He’s got the chutzpah to call himself “God” in a song title and brag about turning water into wine in the lyrics, and even if you hate it for being sacrilegious I respect him having that much belief in himself to stand up and take the flack for being so cocky he can “sound ten feet tall” and “make a nigga jump a ten feet wall.” He is absolutely unquestionably a star. If you had to make a list of rap’s 25 most influential artists today, right here and now, you couldn’t complete it without Jeezy.

Now that we’re absolutely clear about my respect for Mr. Jenkins, all of that can’t wipe aside the fact that he doesn’t represent anything close to the peak of lyricism. In fact at times on songs like the title track to “Church in These Streets” you can actually picture him being punched in one bar at a time, like the famous scene depicted between Andre Young and Eric Wright in the N.W.A movie. He doesn’t seem to flow at all. He makes a statement, then he STOPS. He makes another statement and then he STOPS. He may or may not have a punchline, and if he does it’s not usually super witty. His verses are almost always simplistic. Take “New Clothes” for example:

“They say ‘Boy how you feel?’ I say ‘As good as I’m lookin’
This fresh it should be a crime – read his Mirandas and book him
A million dollars for bail, tell the judge go to hail/hell
As you see beat my case – then I got back to my mail
They had your boy in the county, bologna sandwiches sick
When I stepped out that county boy I was fresh(er) than a bitch”

This also illustrates the other problem with Jeezy – his unrelenting desire to talk about the exact same topics on every single song of every single album. It’s either about having wealth, getting more wealth, being in the trap or trapping. Conspicuous consumption is the order of the day – buy as much booze, cars, jewelry and clothes as you possibly can – then show it off until everybody is jealous as f@%$. Again it’s hard to fault Jeezy for flaunting his success, he’s certainly had to work hard to get it and even harder to keep it (given his almost constant propensity for legal trouble), but it’s just hard to get excited about hearing the same balling and flaunting topics over and over again.

As much as I like Jeezy’s swagger and personality, over one hour of the same thing over and over topically on “Church In These Streets” is just too much for me to handle. “Woke up pissing champagne/woke up drank the same thang” brags Jeezy on “Scared of the Dark.” I mean yeah good for him – maybe if I made the kind of money I did I would too. Maybe we all would. Then again maybe we’d invest it like Shaquille O’Neal did and own a bunch of restaurants or like Magic did and own a bunch of movie theaters. Who’s to say? I hope Jeezy has a fallback position if his charisma and chutzpah ever aren’t enough to carry him forward. In the meantime I can’t deny he’s made some more hits – like the London On Da Track produced “Gold Bottles” and the C4 and Supah Mario produced “Sweet Life.”

I never will fully settle my feelings on Jeezy, but suffice it to say that I’ll always respect his star presence and his hustle, even if I’ll be damned if I can remember any of his lyrics five minutes after listening to a song. Occasionally I’ll remember the hook but that’s about it. At least when Biggie was “live from Bedford-Stuyvesant, the livest one, representing BK to the fullest” I could still remember every bar he spit decades later. Jeezy is a good rapper who just doesn’t write very good raps. That’s about as well as I can explain it and not take up over an hour of your time too.