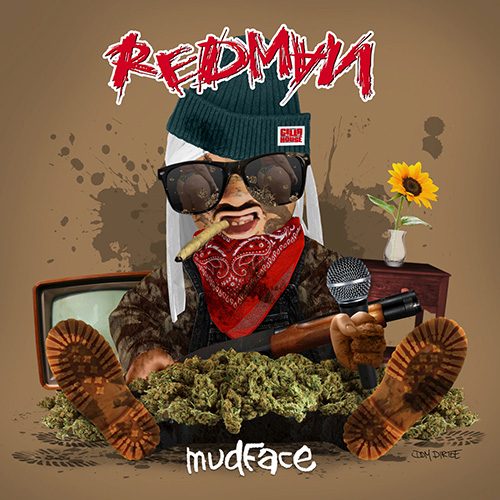 Every now and then I get that e-mail from a RR reader that says “Hey Flash if you had to pick your favorite album/rapper of all time, what would your top ten/twenty/fifty be?” These kind of questions are better answered in editorials than they are by personal reply, one at a time, over and over again. Please don’t take it personally if I don’t respond to “list” questions having read so many in the last 20+ years. I can tell you all one thing for certain though – Reggie Noble would be on the list. Which list – favorite rapper or favorite album? Doesn’t matter – either or both – Redman is all up in there. That’s why I find it incredibly sad that “Mudface” dropped in 2015 and I never heard word one about it. Nobody asked us why we hadn’t reviewed it, but to be frank, they may have been as unaware that it came out as I was.

Part of the problem is that “Reggie” dropped back in 2010, so unless you’re counting mixtapes like “Pancake & Syrup” or “Remixxes” it’s the first project he’s dropped in five years. That’s a whole lifetime in the music business – entire careers start and end in a far shorter period of time. The other problem is that Redman and Def Jam seem to have gone through a divorce albeit an amicable parting with no malice on either side. I’m happy for that since Redman and Def Jam go hand in hand in my mind, so it’s good everybody’s cool with each other, but you can clearly feel the difference between them being behind the production, distribution and promotion of a Reggie Noble project and Redman doing it himself through Gilla House. Visibility matters. When you are an indie artist coming up any “buzz” you get in small publications or internet forums is good – but if you’re a long time major label artist it’s a huge downshift from what even the smallest marketing budget would be. What does going “viral” mean when you used to sell hundreds of thousands of units and up? I think it’s fair to say “Mudface” didn’t even do that.

It’s certainly not for a lack of quality on Reggie’s part that “Mudface” has no buzz, no traction, and nobody talking. He even brings back his old nemesis Dr. Trevis just to set the album off right on the intro, and within a couple of tracks he’s paying tribute to a late great rapper with the self-produced “Beastin’ (MCA).” Once again he’s working without Erick Sermon, and though the lack of the Green Eyed Bandit always bothers me on a Redman project, it’s not going to hurt tracks like the Theory Hazit produced “Bars.” Over three minutes Reggie lives up to the song’s name, spitting punchlines in classic grimy New Jerusalem fashion, letting Hazit provide an equally grimy track that pounds one end of the ivories and pretends the other never existed. And what do I mean by classic punchlines? “Even gay b#%@hes love me like ‘The L Word’.” That means they’re funny as hell and occasionally inappropriate.

Redman is flying almost completely solo on “Mudface.” The cameos are from people you won’t know and with no offense intended won’t remember compared to Reggie’s larger than life flow and personality – but for the record they have names like Runt Dog and StressMatic. Yeah I would have rather had a Keith Murray or Krazy Drayz run-in, or if we want to make it more modern, an Action Bronson or Your Old Droog run-in, but if you’re buying “Mudface” you’re not buying it for any of those peole anyway. You’re buying it for tracks like the Labor Department produced “Gettin’ Inside,” where Redman does what he does best – brag about himself and how great he is while getting smoked da fugggg ouuuuuut.

Long time Cali producer Rick Rock pounds it out for Redman on “Dopeman” and Illmind laces up “Undeniable,” but to my surprise I’m going to say Jahlil Beats trumps their (quality) beats with “Let It Go.” It’s the right mixture of modern production and vintage Redman that touches all bases, and might be the perfect track to introduce people who aren’t familiar with Mr. Noble and his skill set.

“I hustle hard boy tryin to get a quick meal
I throw my hood up, like I’m on one wheel
I let it go, middle finger in the air
when I’m ridin in my truck when I see yo’ b*%$h – done deal
That’s why – I’m goin hard like Garnett
I say when it’s over, until then, all net! (Swish)
I ain’t had a chance to shut down the mall yet
Ellis, let’s get this money (I’m on it!)”

So why aren’t people talking about “Mudface” by now a couple of months after its release? S#$t I don’t know motherf@$#er, you tell me! Sorry that’s my inner Reggie Noble coming out. Maybe the album was just too damn short for people to rave about it. It is only 35 minutes long, and classic Redman albums are usually over an hour long. Most emcees who make jokes and brag about themselves without offering much else probably should be limited to 35 minutes, but Redman is the kind of emcee who could hold down an entire concert without any opening acts, and 35 just isn’t enough for someone with that much charisma. Since that’s and the lack of promotion are really the only two things I can say hurt this album, you should probably cop “Mudface” at your earliest possible opportunity.